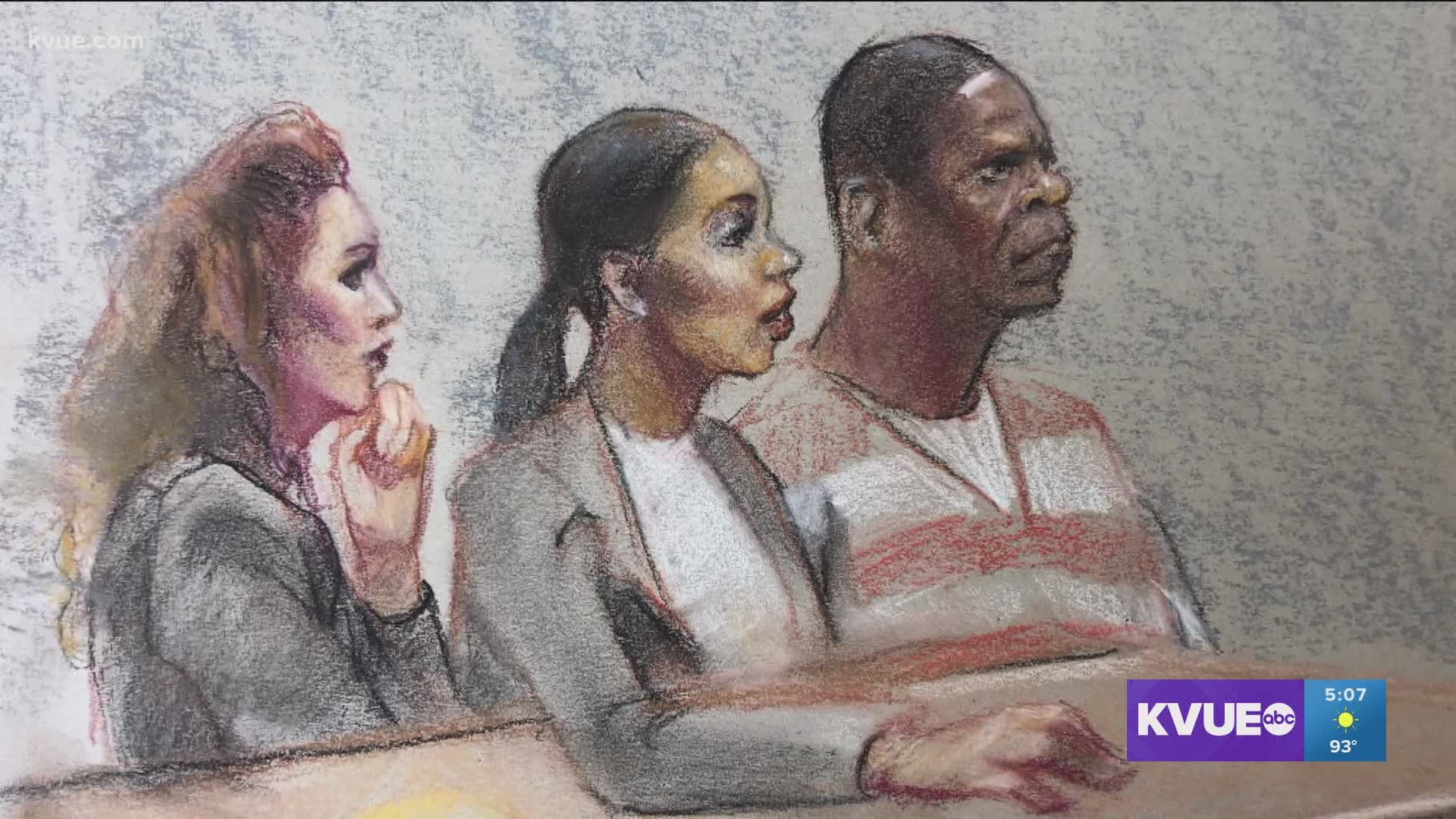 All week, the defense tried to prove Reed didn't abduct, rape or kill Stacey Stites in 1996, the crimes he was arrested for in 1997 and convicted for in 1998.

Board testified that when he saw Stites' body, she was partially undressed and there were other signs that showed she was sexually assaulted.

Board said that led him to look for suspects in the area with a history of sexual assaults.

He also said there was another sexual assault victim who identified Rodney Reed as her assailant.

Board testified that DNA was obtained from her apartment and the sample taken to the DPS crime lab in Austin where it matched the DNA that was taken from Stites' body.

He said as a result, search and arrest warrants were executed for Reed's hair, blood and saliva.

Wardlow testified that although a DNA report eventually eliminated Fennell from being a suspect, Wardlow still had his suspicions about Fennell because he didn't have an alibi, there were inconsistencies and he failed a polygraph Wardlow administered.

The death row inmate no longer has an execution date, but Reed is now trying to get a new trial to clear his name. The evidentiary hearing could lead to that new trial.

For more than 20 years, Reed has maintained his innocence.

On Thursday, day four of the hearing, the court first heard from Stites' former coworker, Brenda Dickinson. Dickinson testified that the two were good friends and that Stites told her she had become scared of her fiancé, Jimmy Fennell, and that she wasn't sure about marrying him.

After Dickinson's testimony, Fennell took the stand. He waived his 5th Amendment right and his right to have his attorney present. During his testimony, Fennell denied Stites was having an affair with Reed, denied all allegations from the 16 defense witnesses who testified that he made racist comments about Reed and denied all allegations that he was abusive toward Stites.

For a full recap of Thursday's proceedings, click here.

4:37 p.m. – Court is adjourned with testimony set to resume on Monday.

3:55 p.m. – Defense is still questioning Wardlow. They discuss how a DNA report eliminated 10 people, including Fennell, as a suspect in Stites' murder. He said he found it interesting that Fennell failed a polygraph test he conducted.

Wardlow said the fact that Fennell didn't have an alibi, inconsistencies in their discussions and the polygraph test kept suspicions in his mind.

Reading his own Texas Rangers report, he notes no attempt at a cover-up. He said it appears Stites was partially sexually assaulted in the car and was transported and murdered in her own vehicle.

3:05 p.m. – Defense cross-examines Wardlow and asks him about the call from Blakely saying semen was found. He said what he heard from Blakely that day is one reason he believes Stites was sexually assaulted.

2:42 – Wardlow is back on the stand with Tanner cross-examining. He testified that there was an Austin woman who reported that Reed tried to kidnap her. No arrest was ever made.

In 1995, Wardlow said there was a sexual assault submitted to the DPS crime lab where the victim withdrew. He could not remember the details why. He said he was seeking a case-to-case match, knowing that victim positively identified Reed.

He said a result in that case-to-case comparison was a match to the Stites case. As a result, he executed a search warrant for Reed's blood, hair and saliva samples. The warrant was conducted after David Board had interviewed Reed.

2 p.m. – Court takes a break so the judge can see the lawyers in the chamber.

1:54 p.m. – Wardlow looks at several items, including an H-E-B badge, that were found at the scene where the truck was found.

He said he interviewed Fennell twice during the investigation. Ronald Duncan, a former Bastrop police officer whose wife previously testified that he now has dementia, also talked to Fennell when it was a missing persons case.

Wardlow said Fennell and Stites shared the truck and he could not figure out how Fennell could have committed the murder and gotten back home in time. He said he could not determine if a Giddings police vehicle was used.

1:35 p.m. – Former Texas Ranger Rocky Wardlow takes the stand, with prosecutor Lisa Tanner questioning. He was the main investigator in the Stites murder case, which started as a missing persons report.

Wardlow said when Stites' truck was found at Bastrop High School, he noticed the driver's seat in an awkward position with the seat belt still connected. He noticed a broken cup as well, all things that made it appear something had happened inside the truck.

He said Stites' body was found partially clothed with a T-shirt lying on the side of the road. He thought she might have been sexually assaulted. Later, he said Karen Blakely with the DPS crime lab called him and confirmed that she was sexually assaulted.

10:30 a.m. – Board is still on the stand. He says he knew Reed prior to 1996 and had dealt with him on more than one occasion. Prosecutor Lisa Tanner points out that Reed has a long history of sexual assault. The defense objects, saying they don't want the state to get into Reed's background.

Board on stand: another sexual victim now has identified Reed as her assailant. DNA taken from her apt matched Stites. On 4/3/97, Reed arrested for Stites’ murder. Prior to that, Reed arrested for unrelated narcotics warrant. #rodneyreed #state

10:25 a.m. – David Board, a former Bastrop police investigator, takes the stand. Board says the Stites investigation began first as a missing person's case. He said when he arrived in the high school parking lot, he saw the truck and a portion of a leather belt.

Board said the truck was found less than a mile from Reed's home. Board called the Texas Rangers to help because there was "cause for grave concern." He went with the Rangers via helicopter to search for Stites. Others found her body in Bastrop County, so the jurisdiction was transferred to that county.

Board said he stayed on the investigation in a support role, interviewing people who knew Stites and going to the news media for help. H-E-B offered a $50,000 reward for information leading to an arrest. No one ever collected that reward, and the investigation went on for a year.

Board said in response to Stites' murder, H-E-B hired off-duty police officers to be on location seven days a week. In all, Board said he interviewed 54 coworkers, former coworkers, friends and people Stites dated. He said no one he spoke to ever mentioned she had a relationship with Reed.

Board still on stand. In light of Stites’ murder, HEB hired off duty police officers to be on location 7 days a week. In all, he interviewed 54 co-workers, former co-workers, friends, ppl she dated. None ever mentioned Stites knew she had a relationship w/Reed. #rodneyreed #state

10 a.m. – The third state witness, Rodney Myer, takes the stand. Myer worked for the Lee County Sheriff's Office for 49 years and testified that the office had no role in the Stites' murder investigation. During cross-examination, the defense showed a dispatch log showing the address of Fennell and Stites the day after her murder.

3rd state witness: Rodney Myer, who worked for Lee Cty Sheriff’s Office for 49 years, testified that Lee County SO had no role in Stites’ murder investigation. In cross, defense showed dispatch log showing address of Jimmy Fennell and Stacey Stites the day after her murder.

9:35 a.m. – The second witness is Nathan Lapham, a former Giddings police officer in 1996. He testified that no Giddings police were involved in the Reed investigation. He also attended Stites' funeral. He said he is not aware of any complaints of Fennell as an officer.

Rodney Reed evidentiary hearing day 5 begins with the state starting it’s case. Media have not been able to obtain state witness list ahead of time like we had for the defense witness list. Follow for updates. #rodneyreed #state #kvue