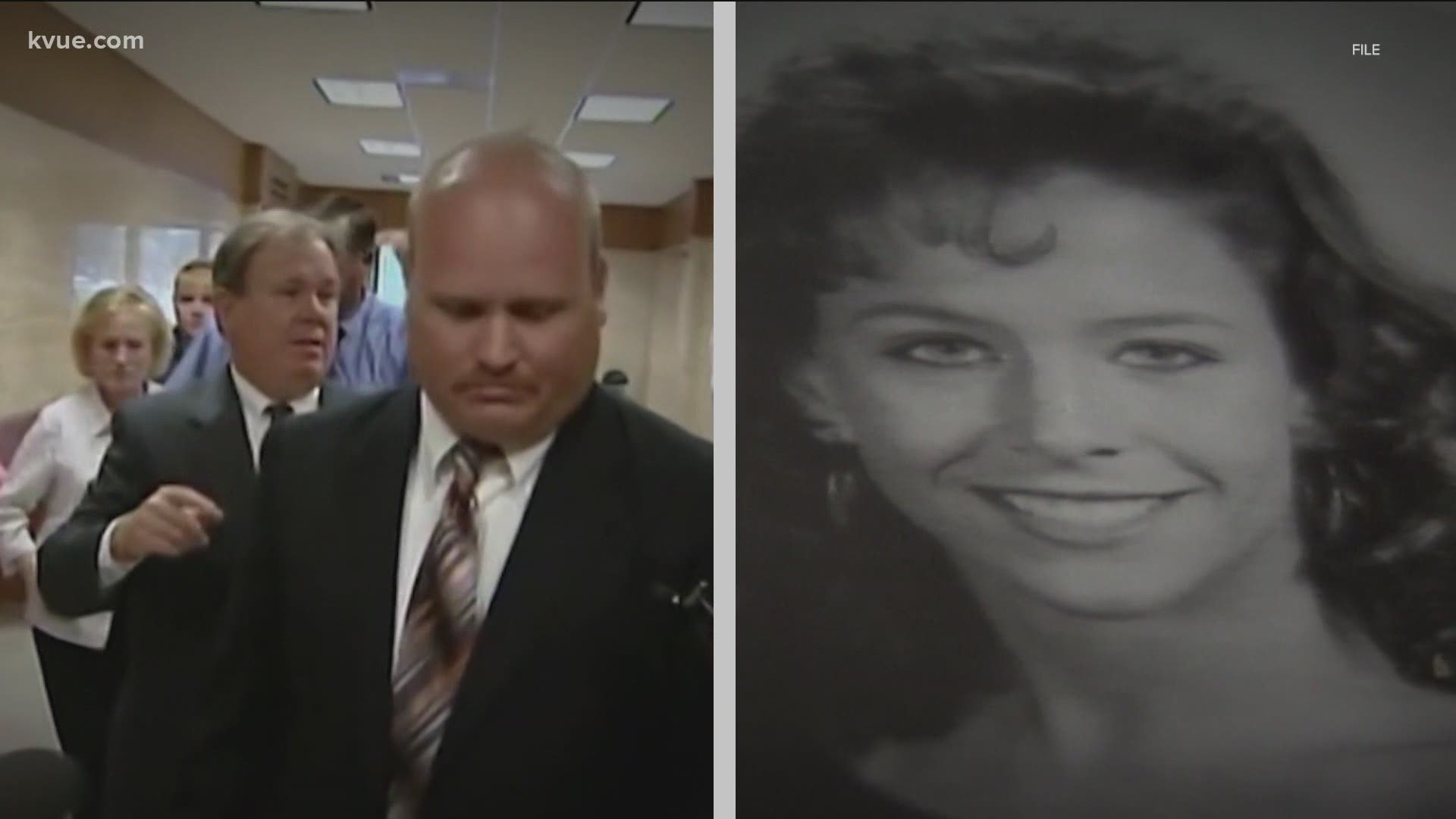 BASTROP, Texas — On Wednesday, Rodney Reed's defense team continued laying down the groundwork for their client not killing Stacey Stites.

The death row inmate is no longer facing execution but he's now trying to get a new trial to clear his name. The evidentiary hearing in Bastrop could lead to that new trial.

In 1998, Reed was convicted of the 1996 abduction, rape and murder of Stacey Stites. For more than 20 years, he has maintained his innocence.

The defense called several witnesses to try to prove the relationship between Stites and her fiancé, Jimmy Fennell, was abusive.

No cameras were allowed in the packed courtroom but artist sketches show witnesses on the stand.

The first was Susan Hugen, a former co-worker of Stites'. They worked together at the H-E-B in Bastrop. She testified she saw hand marks on Stites' wrists.

Hugen said she believes Stacey was in an abusive relationship because she herself was once in one and recognized the signs.

Next, forensic pathologist Dr. Gregory Davis took the stand and testified that he is concerned about Stites' estimated time of death, between 3 a.m. and 5 a.m., because it is too narrow of a window. Dr. Davis said he believes Stites' died before that window but he cannot give a specific time.

He also testified that intact sperm can live as long as a week, testimony that contradicts the State's forensic pathologist who said intact sperm lives up to 26 hours.

Scroggins said Stites' said, "Can we not do this here? This is where I work."

He said he was so shocked that he was paralyzed by the screaming that lasted for a couple of minutes. At that point, Scroggins said Fennell turned to him and said, "What are you f------ looking at, little man? This is none of your f------ business."

Scroggins testified he did not report the incident because there was no physical violence but since discovering Stite's death years later, he feels he should have interceded. He said it haunts him because it resulted in a homicide.

Brent Sappington, whose father's apartment was across from Fennell and Stites', was the defense's next witness. He testified that during a visit at his father's, he heard "commotion sounds, like a bunch of tables being turned over and a bunch of hollering." His father reportedly told him, "That's just Jimmy and Stacey," and that's why he wanted to get away.

Sappington also said his father came forward and reported the incident to police and an assistant district attorney but they told him they already had a suspect.

Vicki Sappington testified she had always wondered why no one questioned her father-in-law about Fennell. Vicki is married to Brent Sappington.

Cynthia Schmidt is a former Giddings dispatcher who worked with Fennell. She testified that he said, "At least the b---- got to wear the d--- dress." The statement refers to Stites being buried in her wedding dress.

Schmidt said she told the Texas Rangers about the comment but they never contacted her.

Alicia Slater worked with Stites at H-E-B. She testified that Stites wasn't excited about her getting married because "'I'm sleeping with a Black man named Rodney.'"

Slater said she discovered that Reed was scheduled for execution and that's when she came forward with the information she had because she felt morally compelled to take action. Slater also appeared on the "Dr. Phil Show" in October of 2019.

Finally, Calvin Horton, Stites' cousin, took the stand to testify that he saw Reed and Stites together. He said he wasn't surprised that Reed was having a relationship with Stites.

Fennell is expected to testify on Wednesday.

The State is expected to call witnesses on Friday.

5:30 p.m. – Alicia Slater, who worked with Stacey Stites at H-E-B, testified that an unknown Black man tried to kidnap her but was never arrested. Slater also said she heard Stites say she was sleeping with a Black man named Rodney. Slater said she was shocked because Stacey was engaged.

Slater said Stites said she didn’t know what Fennell would do if he found out. When Slater eventually discovered Rodney Reed was set to be executed for Stacey’s murder, she “felt morally compelled” to come forward about her knowledge of Reed and Stites’ relationship.

Calvin Horton, Stacey Stites’ cousin, is the last witness of the day. He testified that he saw Stites with Reed. Court is adjourned until 9 a.m. Thursday.

3:45 p.m. – Cynthia Schmidt, a former Giddings dispatcher, is the next defense witness. She testified that she worked with Jimmy Fennell. She said she was afraid of him. She claims she also heard him say, “At least the b---- got to wear the d--- dress,” referring to Stites being buried in her wedding dress.

Schmidt also testified that she told Texas Rangers of her suspicions about Fennell in connection to Stites’ death, gave them her phone number and address but never heard from them.

Schmidt talked about a domestic violence call the dispatcher before her took that she suspected was about Stites. In cross examination, the State asked why other officers wouldn’t report this call. She said not everyone knew. The State asked why she only called one time.

2:55 p.m. – Brent Sappington, whose father was a neighbor of Jimmy Fennell and Stacey Stites, testified that in 1996 during a visit to his father’s apartment, he heard a “commotion, like a bunch of tables being turned over.” He also heard a “bunch of hollering.”

Sappington said his father gave this information to police and an assistant DA but was told to “hush his mouth,” because they already had a suspect.

His wife, Vicki Sappington, also took the stand. She said she regrets every day she initially discouraged her father-in-law from coming forward with information about Stites' and Fennell's relationship. She said she is coming forward now because she believes an innocent man is on death row and a monster is out.

He said he heard Stites saying, "Can we not do this here? This is where I work," with her head down during the screaming. Scroggins added that Fennell started yelling at him for standing about 30 feet away, saying, "What are you f------ looking at, Little Man?"

12:28 p.m. – After a break, the State cross-examined Dr. Davis, asking if he could determine if Reed abducted, sexually assaulted or anally penetrated Stites based on autopsy photos alone. He said no. This is important because he never examined any evidence in person.

Dr. Davis testified that it is up to a jury to determine who commits a crime, not him. He said he agreed that the way Stites' body was found at the crime scene suggests she could have been sexually assaulted.

11:26 a.m. – Judge Langely tells defense they can't bootstrap their argument into an expert opinion. After a Q&A between the judge and defense, the defense moved forward with what they wanted to ask: Dr. Davis' opinion of 14 other forensic pathologists agreeing with Dr. Baker’s report.

11:06 a.m. – Dr. Davis testified that previous forensic testimony regarding intact sperm only lasting 26 hours is misleading. He said there is evidence that shows intact sperm can last a week.

Judge Langley did not allow a “report” authored by two defense attorneys and not forensic experts as evidence. Judge Langley showed frustration with the defense because he says they’re trying to make their summary argument and this is not evidence.

10:35 a.m. – After a brief break, the defense called its second witness via Zoom: Dr. Gregory Davis, a forensic pathologist with more than 30 years of experience who has performed about 415 autopsies per year.

Dr. Davis said he’s concerned about Stacey Stites’ estimated time of death – which was noted as between 3 a.m. and 5 a.m. – because it is too narrow. He said Stites died before the two-hour window, but cannot give a time. This is important because the State contends Stites’ time of death is between 3 a.m. 5 a.m.

Debra Oliver, Stacey Stites’ sister, looked away as Dr. Davis and attorney talk about Stacey’s autopsy photos. Oliver said she has not been able to look at any of the graphic images.

Hugen said Stites had hand marks across her wrists. Hugen also testified that Stites introduced her to Reed as a very good friend and that Stites acted flirty with Reed. She believed it was more than a friendship.

After Stacey’s death and the eventual news that Reed became the suspect, Hugen said she didn’t believe it. She said she told police this information.

9:17 a.m. –  Judge J.D. Langley gives a strict warning: no pictures in the courtroom. He had to remove someone from the gallery for doing so already.

On Tuesday, day two of the hearing, Reed's defense team presented compelling testimony that they hope will persuade the judge to give a favorable opinion that may ultimately lead to a new trial.

Three witnesses who testified Tuesday stated that Stites’ fiancé, Jimmy Fennell, said things to them over the years that suggested he was the killer, not Reed. However, Stites' sister, Debra Oliver, told KVUE that none of what she heard Tuesday changes her mind about Reed's guilt.