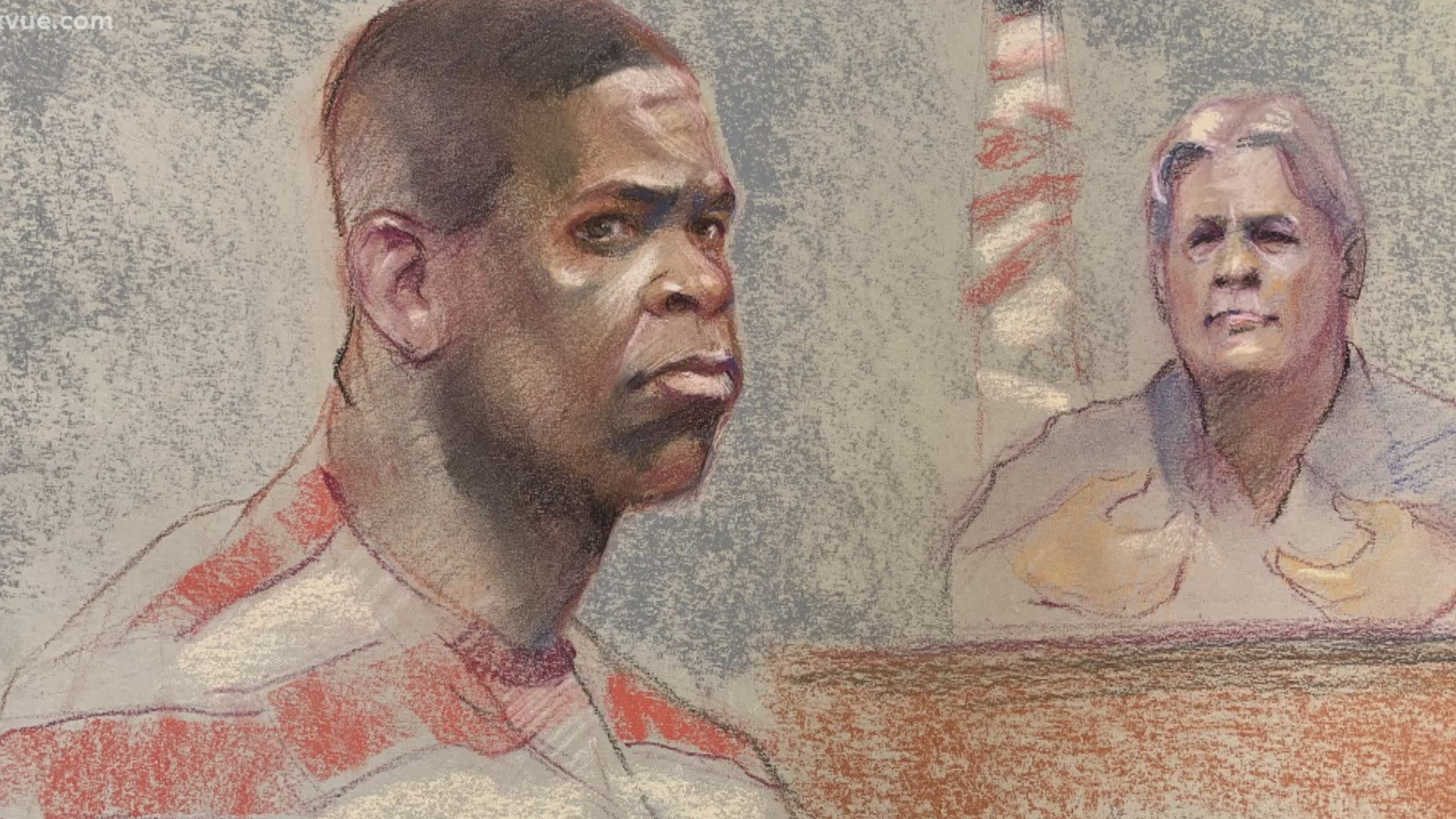 BASTROP COUNTY, Texas — Warning: This story has language that may be offensive to some people. Viewer discretion is advised.

His attorneys hope new evidence will help persuade Judge J.D. Langley to give a favorable opinion that may ultimately lead to a new trial. That is up to the Court of Criminal Appeals.

In 1998, Reed was convicted of the 1996 abduction, rape and murder of Stacey Stites.

Clampit said he knew Jimmy Fennell, Stites' fiancé, as an officer from the Giddings Police Department. He testified that during Stites' funeral service, he heard Fennell say, "She got what she deserved," referring to her murder. Clampit said it was the most shocking thing he had heard in his life.

The former law enforcement officer said he didn't know any of the names of the people who may have overheard Fennell make the same comment at the service.

Up next, a former Aryan Brotherhood member took the stand as the defense continues to build its case that it's Fennell who killed Stites and not Reed.

Arthur Snow did time with Fennell in prison. Fennell served a 10-year term for kidnapping and improper sexual activity with a person in his custody, during his stint as a Georgetown police officer.

A belt is what was used to murder Stites.

Then there was Michael Bordelon, a former inmate who met Fennell in prison. He testified that Fennell told him, "I took care of the problem." When he asked Fennell what he meant, Fennell said, "That d--- n----- is going to do the time," Bordelon testified.

Stites' sister, Debra Oliver, sat and listened to all this testimony. She said none of it changes her mind about Reed's guilt.

"I haven't found any of them to be credible. The fact that many of these people waited for more than 20 years before they decided to come forward – the mind is a funny thing, sometimes seeds are planted," Oliver said.

Her older sister said waiting to get justice has been a long process.

"It's very hard. We definitely lose a lot of sleep over this," Oliver said.

As for Fennell possibly testifying, Oliver said she has no problems with that.

"I don't have any problem with Jimmy coming forward. I've actually been in contact with Jimmy. Jimmy Fennell was and will always be our brother-in-law. I am 100% confident that Jimmy did not kill our sister," she said.

During Monday's testimony of forensic pathologist Dr. Andrew Baker, Oliver said it was difficult but she did look at the graphic images of her sister.

As for Reed's family, Oliver has a message.

When asked if she thinks her sister may have had any kind of relationship with Reed, Oliver said not an intimate one.

"It's a small town and having worked in retail, we're friendly. We might talk to people, so the fact that you saw some people talking in the store, I talk to a lot of people when I worked in retail – doesn't mean I was sleeping with them," Oliver said.

3:03 p.m. – Rodney Reed’s other brother, Robert, has been spending his time sketching the proceedings.

3:01 p.m. – Rodrick Reed, Rodney’s brother, has been allowed back in the courtroom after talking to the bailiff.

2:57 p.m. – Court goes into a break after hearing from two H-E-B employees who worked with Stacey Stites. Paul Espinoza witnessed an interaction where Stites appeared afraid afterward. The state pointed out he is only coming forward 25 years later. Rebecca Randall also worked with Stites.

2:03 p.m. – Defense calls witness Victor Juarez, H-E-B night manager in 1996. Juarez worked with Stacey Stites and described her as outgoing, beautiful, liked to fish and was excited about getting married.

The morning of the murder, Juarez called Stites’ mother looking for Stacey when she didn’t show up for work. Juarez testified H-E-B provided counseling for workers because employees were so upset by her killing.

11:54 a.m. – Michael Bordelon is the defense's next witness. While in prison in 2012, he met Fennell and became friends. According to Bordelon's testimony, "Fennell is racist and was a member of the Aryan Brotherhood & used the 'n' word."

While in prison, Bordelon said Fennell told him that a "damn n----- killed his ex-girlfriend" and that he was on death row. He later visited Fennell’s cell to get more details. Bordelon testified that Fennell said, “I got rid of her,” while making a gesture consistent with strangulation. He claims Fennell also said, “that damn n----- is going to do the time.”

As to why he is only coming forward now, Bordelon told the court that he heard Fennell’s name on the Dr. Phil show in 2019 (he got out of prison 2014) and made the connection between Fennell and Rodney Reed. That’s when he knew he had to do the right thing.

10:43 a.m. – Judge J.D. Langley banned Rodrick Reed, Rodney Reed’s brother, from the courtroom after he asked prosecutors how they can sleep at night. Langley said he is not here to be a referee between the gallery and attorneys. Langley warned the gallery to refrain from making any more comments.

KVUE's Jenni Lee confirmed that Roderick Reed has been banned for the entire duration of the hearing.

And I’ve just confirmed it is for the entire duration of the hearing. #rodneyreed #kvue https://t.co/JwHbocXzz9

10:10 a.m. – Arthur Snow is the defense’s next witness. Snow is a former inmate with Fennell, and while serving together, Snow says he heard Fennell say, “you wouldn’t believe how easily a man’s belt’s breaks when strangling a n----- loving w----.”

Snow said he came forward with this information because it was the right thing to do. It had cost him his marriage. Snow testified that his ex-wife is a member of the Aryan Brotherhood. He said he was a member for 20 years and is no longer a member.

9:40 a.m. – In cross-examination, the State asked Clampit if anyone else at the funeral service heard what Fennell said. Clampit cannot recall the names of the people who attended. State asked why Clampit didn’t tell anyone. Clampit said he only told his wife and a couple of good friends.

The State went on to ask, but it was watching the media that made you want to come forward with the Fennell statement? Clampit said yes. The defense came back and asked if he is afraid of retaliation. Clampit said no, he’s retired.

9:18 a.m. – James Clampit is the defense’s first witness. The former Lee County Sheriff’s deputy testified during Stacey Stites’ funeral services that her fiancé, Jimmy Fennell, said she got what she deserved. Clampit said it was the most shocking thing he has ever heard.

During day one of the evidentiary hearing, the defense called witnesses who they said will prove Reed's innocence, including a forensic pathologist that disputes Stites' time of death.

Reed's loved ones also filled many of the courtroom seats Monday. Several wore the same black and neon green shirt that read, "I stand with Rodney Reed," the same shirt many wore during the pre-evidentiary hearing two weeks ago.

Read more about what happened Monday and check back on this article for updates.

In 2019, Reed received a stay of execution, just days before his scheduled execution date. The Texas Court of Criminal Appeals was granted based on possibly concealed information, false testimony and the chance that he is innocent.