Parents, lawyers calling for change at Austin ISD after girl was sexually assaulted by bus driver

The parents of a young girl with special needs are calling for changes in how the district reviews bus camera footage.

AUSTIN, Texas — The parents of a five-year-old Austin ISD student spoke to the public for the first time on Friday after their daughter was sexually assaulted by a bus driver multiple times.

In January, Cesar Maldonado, 58, was sentenced to 20 years in prison for indecency with a child by contact, a second-degree felony, after bus surveillance video captured several incidents of him abusing the child in the presence of other children.

While there has been an ongoing legal action between the parents and the district, the young girl's family and their lawyers held a press conference Friday to call for change in AISD policies. Namely, they claim the district is not reviewing footage captured by bus cameras, it is allowing bus monitors to exit the bus when children are still on board, and they're also calling for stronger background checks.

With help from the Amaro Law Firm, parents Joaquin and Crystal Ayon were on hand Friday to take questions from the press.

“I just feel sad, angry, because this happened with my daughter," said Crystal Ayon. "She has special needs.”

The mother said her young daughter is in speech therapy because she does not speak.

“They have to have more responsibility to people,” she said. “I don’t trust them no more. With what happened to my daughter … you never know what happened with other babies.”

Their lawyers said the investigation has revealed previous instances of sexual assaults at AISD schools, and a failure to take action to prevent future cases from happening. In their case, they claim that although there was a previous incident where an AISD bus driver assaulted a girl multiple times, a monitor assigned to the bus was still allowed to leave the bus with children on board.

The firm also said AISD used its own police force to investigate most student sexual assault cases and actively discouraged victims' parents from contacting the Austin Police Department. They said AISD police did not collect simple evidence, such as rape kits, or interview the suspect in a timely manner, or at all in some cases.

"Whenever you have the fox guarding the henhouse, the hens get eaten," said civil rights lawyer Randall Kallinen. "AISD had its own police investigate these multiple student sexual assaults who demonstrated an extreme bias in favor of the district over the students. It is time to do something."

The federal lawsuit can be viewed below: 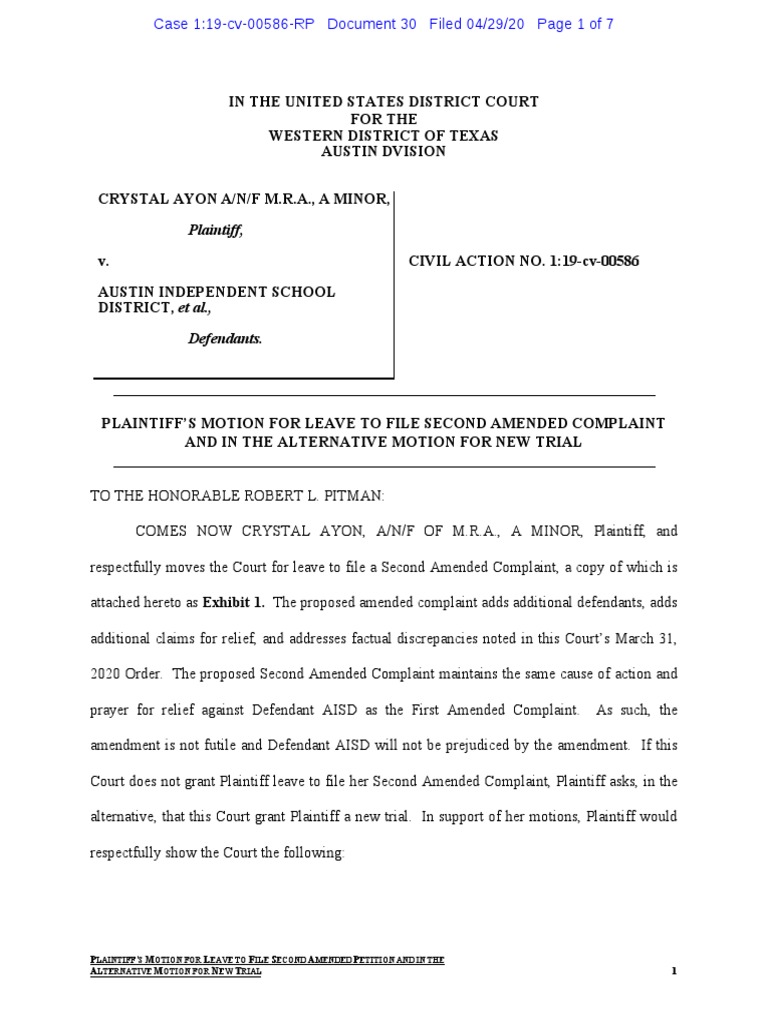 Austin ISD Lawsuit | Complaint | Federal Rules Of Civil Procedure | Free 30-day Trial | Scribd
FOR THE WESTERN DISTRICT OF TEXAS AUSTIN DVISION Plaintiff, DISTRICT, et al., Defendants. AND IN THE ALTERNATIVE MOTION FOR NEW TRIAL respectfully moves the Court for leave to file a Second Amended Complaint, a copy of which is attached hereto as Exhibit 1.

The law firm said other incidents looked at during the investigation include:

"The Ayon v. AISD lawsuit was dismissed without prejudice by federal judge Pittman on March 31, 2020, because the plaintiff did not allege sufficient facts to demonstrate that AISD had a policy permissive of sexual abuse, and AISD was not deliberately indifferent in training its bus drivers and bus monitors. Judge Pittman entered a final judgment on April 3, 2020, in favor of AISD. On April 29, 2020, plaintiffs filed a motion for leave to file an amended complaint, or in the alternative, a motion for a new trial. The plaintiff’s motion is still pending. Due to the ongoing litigation, and the privacy rights of those involved, AISD is not at liberty to discuss the facts of the case at this time."