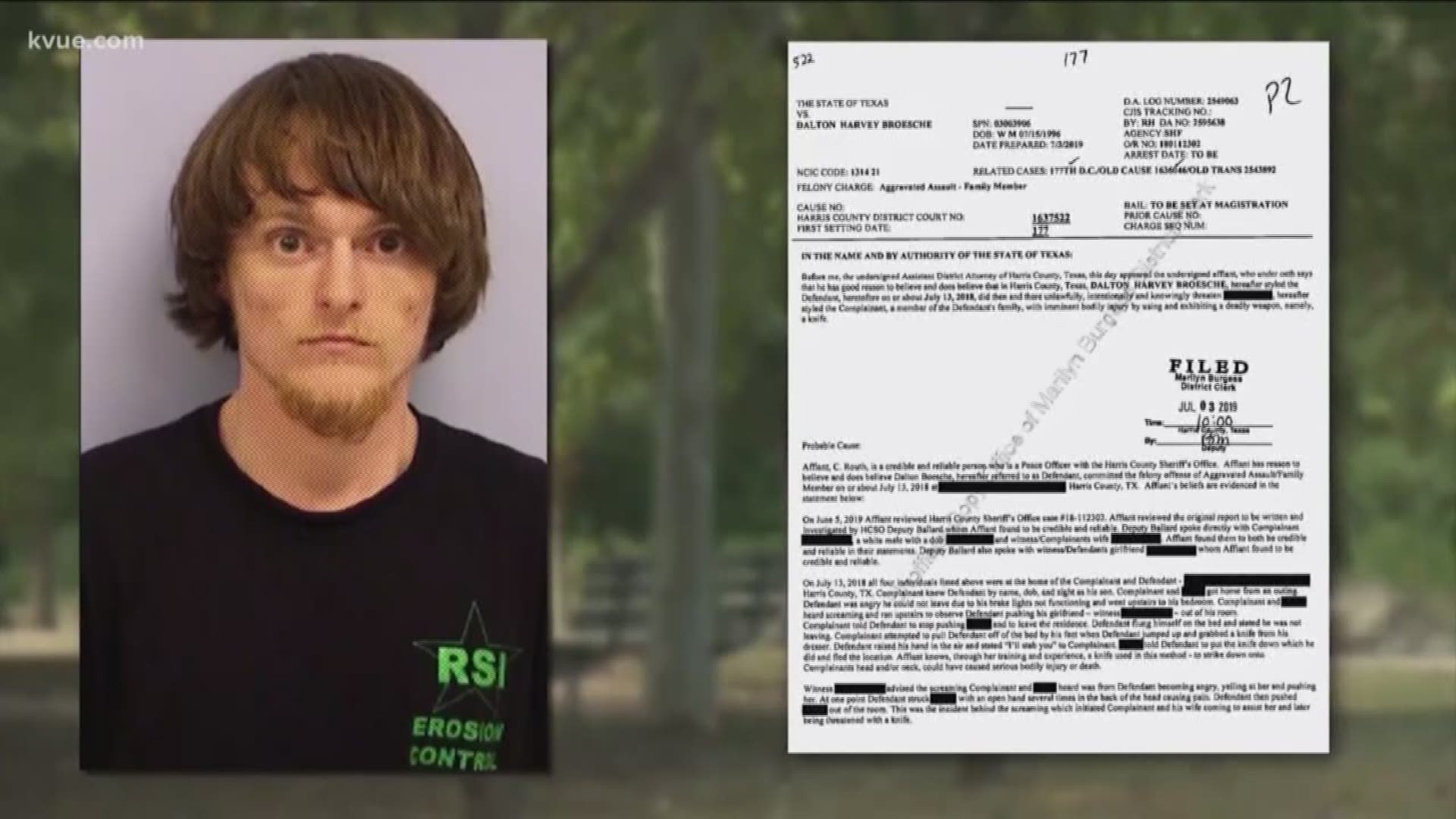 AUSTIN, Texas — The man arrested at Pease Park earlier this month with a loaded pistol, a loaded AR-15, a knife and a baton bought the AR-15 just three weeks earlier at Central Texas Gun Works, according to the store's owner.

Dalton Broesche, 23, was arrested Aug. 14 at Pease Park. Around 1:30 p.m., someone called 911 to report a man carrying an assault rifle and a large knife in a backpack. The caller told dispatchers the man was walking toward a group of a lot of kids.

During that arrest, police realized Broesche had a warrant for his arrest out of Harris County. He is accused of assaulting his girlfriend and threatening a resident with a knife.

The felony warrant was issued July 3 – just 20 days before Broesche went to buy the gun in Austin.

“The customer came in on July 23. When he came in then, he filled out the 4473, and then the response that we got back from the National Instant Criminal Background Check System was delayed,” said Michael Cargill, the owner of Central Texas Gun Works.

After three business days of delay, federal law allows the firearm to be released to the customer. Broesche came back to the gun shop on July 27 to pick up the weapon.

“Later on down the road, that incident happened at Pease Park and that's when we found out that he had a warrant for his arrest,” Cargill said.

He checked sales records and saw that Broesche had bought the gun at his store. To date, Cargill said he still hasn’t heard back on the National Instant Criminal Background Check System (NICS) status.

“Whenever that happens – you have a warrant for your arrest, a felony warrant – that should trigger immediate denial,” Cargill said.

KVUE reached out to the FBI and Texas Department of Public Safety on Friday to determine what went wrong in this situation.

Texas DPS provided a letter, dated Feb. 15, 2017, providing guidance from the FBI for states about how it would begin applying the law when determining if people are eligible to receive or possess firearms.

According to the letter, “since the inception of the NICS,” a verified outstanding warrant was enough to stop the transfer of a firearm. But in 2017, the application of the law changed.

“The department determined that the Brady Act does not authorize the denial of firearm transfers under the ‘fugitive from justice’ prohibitor based on the mere existence of an outstanding arrest warrant,” the letter said.

Cargill said Broesche also took a license to carry a handgun course at Central Texas Gun Works on June 27. According to online records, Broesche passed a background check for that license, and it was mailed to him.

According to jail records as of Oct 4., Broesche is in custody, being held on $175,000 bond for the following charges:

WATCH: No motive determined yet in Pease Park weapons incident