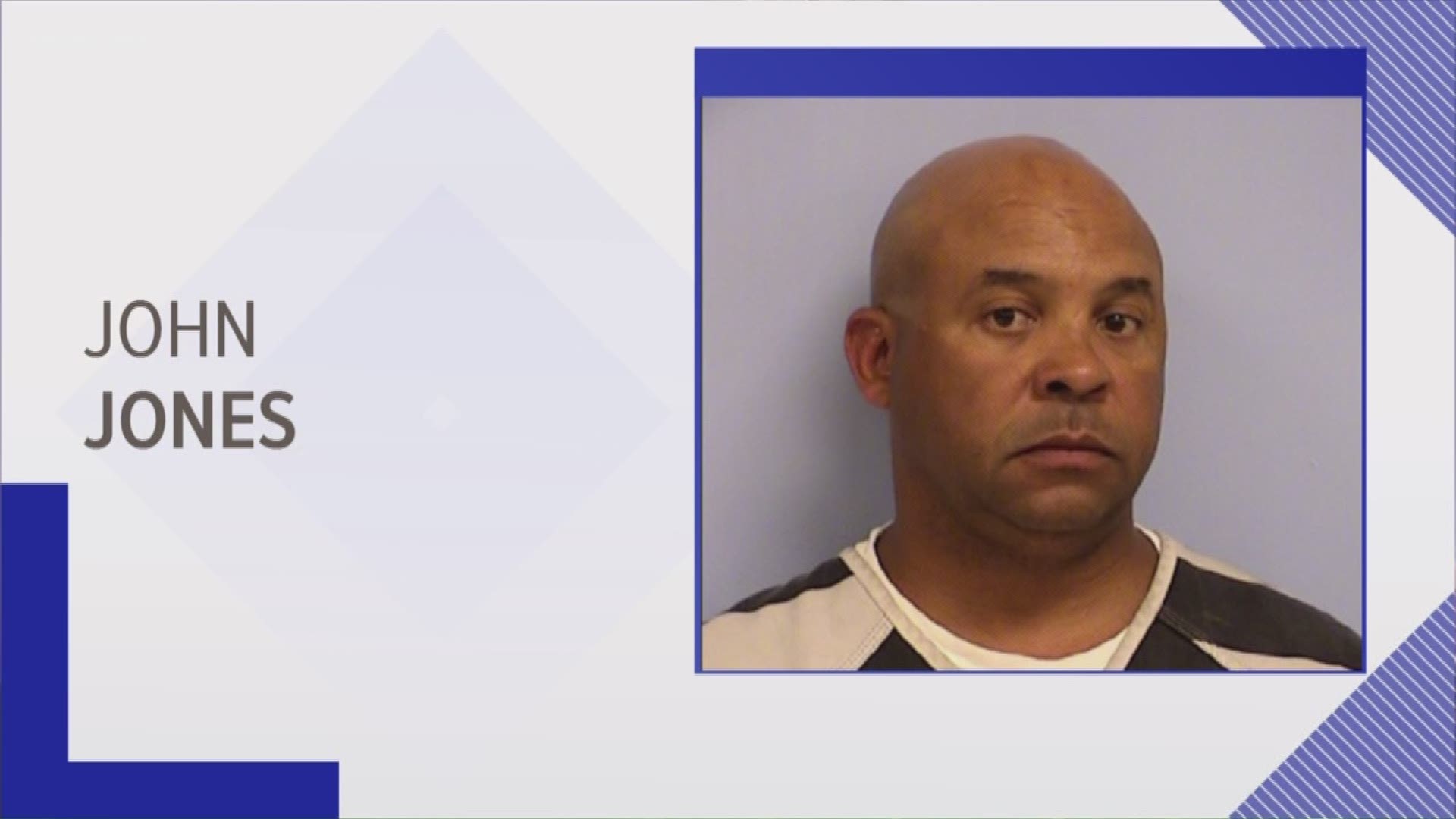 TRAVIS COUNTY, Texas — EDITOR'S NOTE: A previous version of this story said that John Jones had posted his $750,000 bond on Wednesday. However, as of Thursday afternoon, jail records indicate he is still in the Travis County Jail and that his bond has been reduced to $100,000.

A brutal rape allegation has been made against a top division chief in the Texas Department of Public Safety.

John Jones has since been fired and was arrested, but as of Friday evening, he has bonded out of jail.

Jones once rubbed elbows with political elites like President Donald Trump, but a Travis County judge didn't make it easy for Jones to get out of jail after his arrest Tuesday, imposing a $750,000 bond and special conditions on his release.

Jones' attorney Benjamin Blackburn said a motion was later filed with Travis County District Attorney Margaret Moore demanding a hearing to lower the bond to $100,000. DA Moore granted the hearing. On Thursday, the State District Judge Tamara Needles agreed to lower the bond, with the following conditions: Jones can't come within 200 yards of the alleged victim, he must have a GPS monitor on his leg before being released from jail and he must surrender his passport and military identification.

However, those conditions changed again on Friday. The DA's office presented new concerns about their ability to keep tabs on Jones while he was out of jail awaiting trial.

"We do everything we can to protect any victim and we do rely on GPS monitoring regularly to do that. It's just this particular defendant has, we believe, the kind of knowledge that most defendants don't have," DA Moore said.

"It's ridiculous they would ask for a bond that high and then to agree to lower it and then come back based on pure speculation with no clear or no concrete facts that are presented that there was going to be a basis for them to revoke that bond," Blackburn said.

The judge ended up keeping the lower bond but adding new conditions. Jones will be on house arrest and have an ankle monitor. He still cannot go near the alleged victim or witnesses.

Court documents detail the brutality of the alleged crimes that took place the same day Jones hosted a party on July 20. The arrest warrant said Jones and a woman took a ride on an ATV when he forced it off the road and raped her several times.

Former state district judge Charlie Baird said he was shocked to read the gruesome details of the alleged crimes.

Baird is now in private practice as an attorney. But for more than 20 years, he presided over felony cases in Travis County. He said the high bond and the fact that Jones had to surrender his passport showed he is a flight risk. He also said the special conditions placed on Jones' release show the judge's other concern.

"As a specific condition of this bond, he cannot have any contact with the victim, number one, and which I think is extraordinary in this particular case is that the judge has listed specific potential witnesses with whom the defendant cannot have any contact. So, apparently, the judge was concerned with some kind of retaliation or intimidation of those witnesses," Baird said.

According to an arrest affidavit obtained by KVUE, Travis County deputies responded to a sexual assault that happened on July 20 in the 1500 block of Apple Springs Hollow in Leander.

The victim reportedly told police that she was assaulted at a party Jones was hosting at his residence. She arrived at his home at about 1 p.m. that day and said Jones had been drinking all day. At one point, he passed out, according to the affidavit.

At about 9 p.m. that night, Jones and the victim took a ride on one of his ATVs, police said. The woman was initially riding on "the trails" around his home when Jones reportedly instructed her to go off the road.

Jones then asked the victim when the last time she had sex was and then "aggressively pushed her forward, allowing him to take control of the ATV," according to the police. Jones allegedly drove the ATV into a brushy area and put his hands into her shirt and under her bra. Police said he then squeezed her breasts and clenched his teeth, saying, "I know it's wrong."

According to the affidavit, the victim said Jones then twisted her body and bit her, causing her to fall to the ground. He then allegedly began to rape her.

The victim told police that once the assault was over, Jones let her get dressed and then he drove them back to his home.

Police said when she arrived back, she called a friend and got a ride home. Her mother then reportedly took her to a local emergency room to have a sexual assault forensic exam.

The report found trauma to the victim's vagina and anus, police said. The report also noted the victim had bruises on her arms, buttocks and inner thigh.

The victim told police that she couldn't defecate for three days after the assault.

According to DPS, John Jones was terminated from the department on Tuesday. Jones, who was the chief of the DPS Intelligence and Counterterrorism Division, was arrested by investigators from the Travis County Sheriff's Office and the Texas Rangers on a sexual assault charge, DPS said.

"The department takes allegations like this very seriously, and the Texas Rangers are working closely with the Travis County District Attorney's Office and the Travis County Sheriff's Office, which is leading this investigation," DPS told KVUE.