The victim from this incident was Dr. Katherine Lindley Dodson, 43, and the suspect was Dr. Bharat Narumanchi, 43, according to APD. 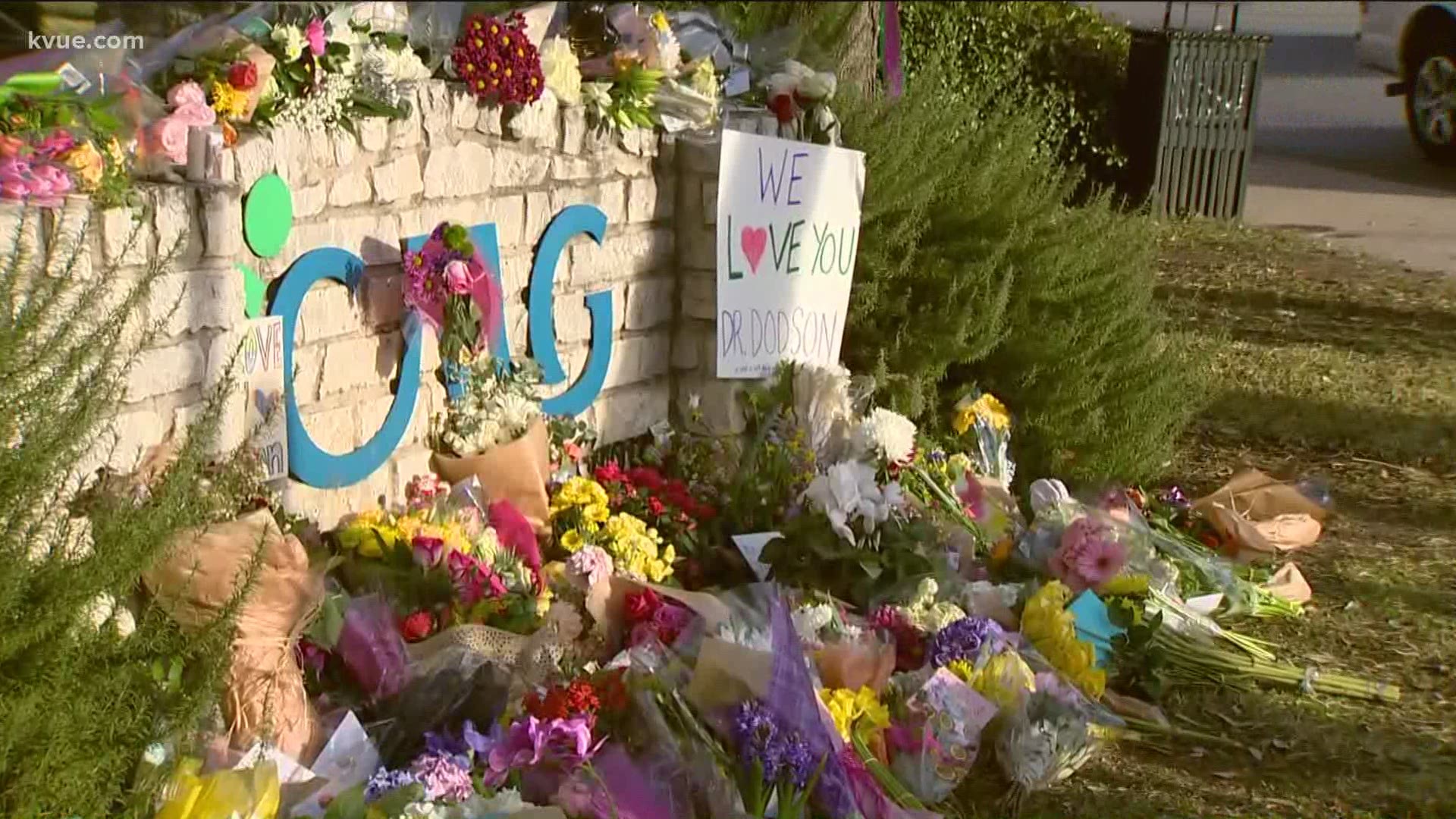 The APD said the SWAT situation happened at 1912 W. 35th St. near MoPac Expressway and 35th Street, which is the same location as Children's Medical Group, a pediatric office.

APD said on Jan. 27 that the victim of this incident was Dr. Katherine Lindley Dodson, 43. The suspect, according to APD, was Dr.  Bharat Narumanchi, 43.

RELATED: Here's what we know about the doctors from the deadly Austin hostage situation

When police officers first responded to the scene, they learned that there were five hostages, including Dr. Dodson. Several were able to escape and others were later allowed to leave, leaving Dodson as the sole hostage.

Dr. Dodson and Dr. Narumanchi did not appear to have any prior relations outside of his visit the week prior to the reported hostage incident, APD said.

Hostage negotiators made several attempts to make contact with Narumanchi, but he was not responsive. Later, the two doctors were found with gunshot wounds.

This is Austin’s fourth homicide of 2021, according to APD. Detectives are asking anyone with information or video of the incident to call APD Homicide at 512-974-TIPS, email homicide.apd@austintexas.gov, utilize the Crime Stoppers tip line at 512-472-8477 (TIPS), or the Crime Stoppers app. You may remain anonymous. You can also submit tips by downloading APD’s mobile app, Austin PD, free on iPhone and Android.

Via a spokesperson on Wednesday afternoon, the Dodson family released the following statement:

“We are beyond devastated at the tragic, sudden and senseless loss of our beloved Lindley. As a dedicated mom, wife, daughter, friend and pediatrician, she radiated light, love and joy in everything she did and with everyone she touched. She developed immediate rapport with her patients and had the unique ability to make you feel like the only person in the room. She brightened our lives and lifted us up with her laughter, which was like magic. We are all better because of her. Our only comfort is knowing she is now with Jesus and all the heavenly saints who are undoubtedly already looking forward to her first costume party. We are so grateful for the outpouring of love and concern but due to the ongoing nature of this investigation and our request for privacy during this awful time, we will have no further comment.”

A GoFundMe campaign, which has been verified by the company, has been set up to benefit Children's Medical Group.

KVUE's Tony Plohetski and Luis de Leon were on the scene from the beginning when officials reported a heavy police presence, including members of the SWAT team, at the doctor's office.

The following is a timeline of the situation as information came into the KVUE newsroom:

Having trouble viewing this timeline on the KVUE app? Click here.

11 a.m., Wednesday – APD identifies the suspect, Dr. Bharat Narumanchi, and Dr. Dodson as the victim. They were both found with gunshot wounds. Police revealed that other hostages were involved, but they escaped or were released.

11:10 p.m., Tuesday – APD provides a press briefing, confirming that two people are dead following the six-hour SWAT situation. The APD said that it sent a robot unit into the building and, through the unit's camera, officers were able to identify a victim. At that point, the SWAT team entered the building and found two people – "one that was originally inside the building and one that was not" – both dead.

10 p.m., Tuesday – Tony Plohetski and Luis de Leon join KVUE live from the scene for the KVUE newscast at 10 p.m.

9:40 p.m., Tuesday  – A negotiator continues to try to contact the suspect. "I know you have helped so many children. We want that to be your legacy. Please make that possible," the negotiator says.

9:30 p.m., Tuesday – Authorities on the scene say it has been at least two hours since they have had any contact with the suspect.

UPDATE: Authorities say it has now been at least two hours since any contact with hostage taker. They have told him that his sister is very concerned about him and have been in touch with her. https://t.co/AllZbLTOI3

NEW: The pleas of the hostage negotiator continue 3 hours into the situation: “I cannot guarantee your safety unless you comply. I am letting you know, doctor, there is a way to resolve this. I need your help to fix the situation. That starts with you answering the phone.” https://t.co/cx7E682OcY

8:20 p.m., Tuesday – Tony Plohetski tweets that the suspect in the reported hostage situation appears to be a doctor, based on audible transmissions to the suspect from APD.

"You don't deserve to go through this ... for all you have done for others ... that is why I want to help you work through this. You have saved a lot of lives," one negotiator says.

BREAKING: The suspect in the hostage situation appears to be another doctor, based on audible transmissions to him by APD:

“You don’t deserve to go through this..for all you have done for others...that is why I want to help you work through this. You have saved a lot of lives.”

The officer says that APD responded to what was initially a "disturbance at a building" 911 call and that a few nearby homes were evacuated.

The officer also says that APD, the Travis County Sheriff's Office, the Austin Fire Department and Austin-Travis County EMS are all on the scene.

Residents are encouraged to stay away from the area within a two- to three-block range.

7:45 p.m., Tuesday – SWAT negotiators call to the suspect on a bullhorn, urging him to answer his phone or text. The message indicates at least one doctor is among the reported hostages, Tony Plohetski tweets.

UPDATE: SWAT negotiators are calling out on bullhorn to hostage taker urging him to answer his phone or text. “I know life is important to you.” The message indicates at least one doctor is being held. @BronteWittpenn https://t.co/7OBhxJCEgw

7:40 p.m., Tuesday – Luis de Leon speaks to a witness on the scene who works at a dentist's office next door to the situation. She told de Leon that the situation began to unfold around 4:15 p.m. Around that time, she said one of her office's hygienists said there might be someone with a gun next door.

The witness said she and her coworkers shut the windows and made sure the door was locked at their office. Then, as she was looking out the door to try to see anything, she spotted a group of people.

"A whole group of people from next door had gotten free. I guess they escaped out the back door is what they said," she said.

She said she and her coworkers opened the door for the group to let them into their office for shelter.

The group told the witness that they were on the phone with the police, who instructed them to stay on the ground until they arrived. Once police arrived, the group was able to safely exit the building.

Update to the scene as of 6:42 - APD’s Mobile Command Unit has entered the area. We are on scene. Stay with @KVUE for the latest. https://t.co/B3W0V7ovLp pic.twitter.com/dvdIH8hkUu

6 p.m., Tuesday – KVUE Senior Reporter Tony Plohetski arrives on the scene of a reported hostage situation and reports a heavy police presence, including SWAT officers, at a doctor's office. Initial reports state there could be as many as five hostages.

5:45 p.m., Tuesday – Officials say a heavy police presence, including members of the SWAT team, is working on the 1900 block of West 35th St. 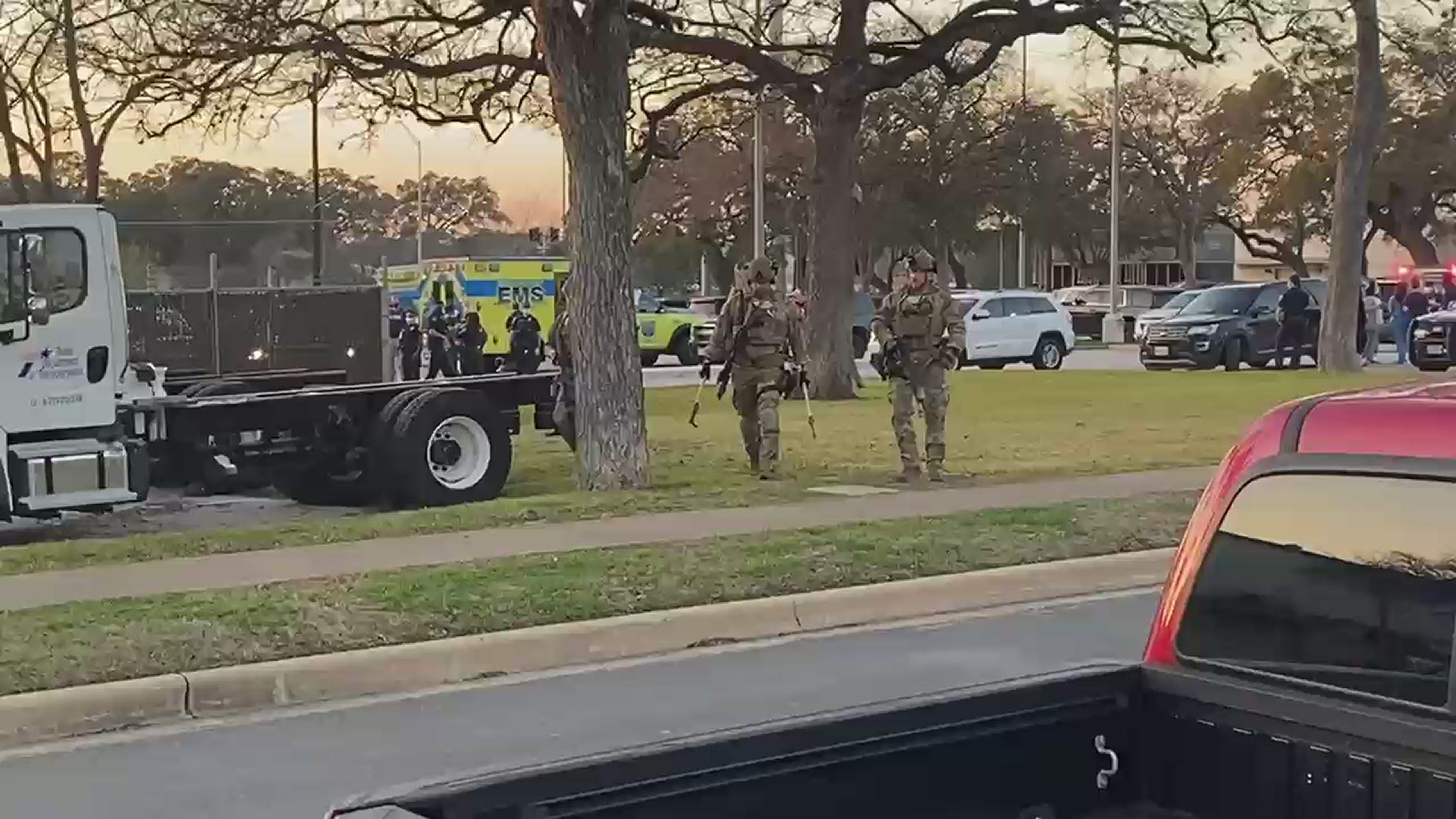