The Austin Police Department has launched a criminal mischief investigation. The suspect has not yet been identified. 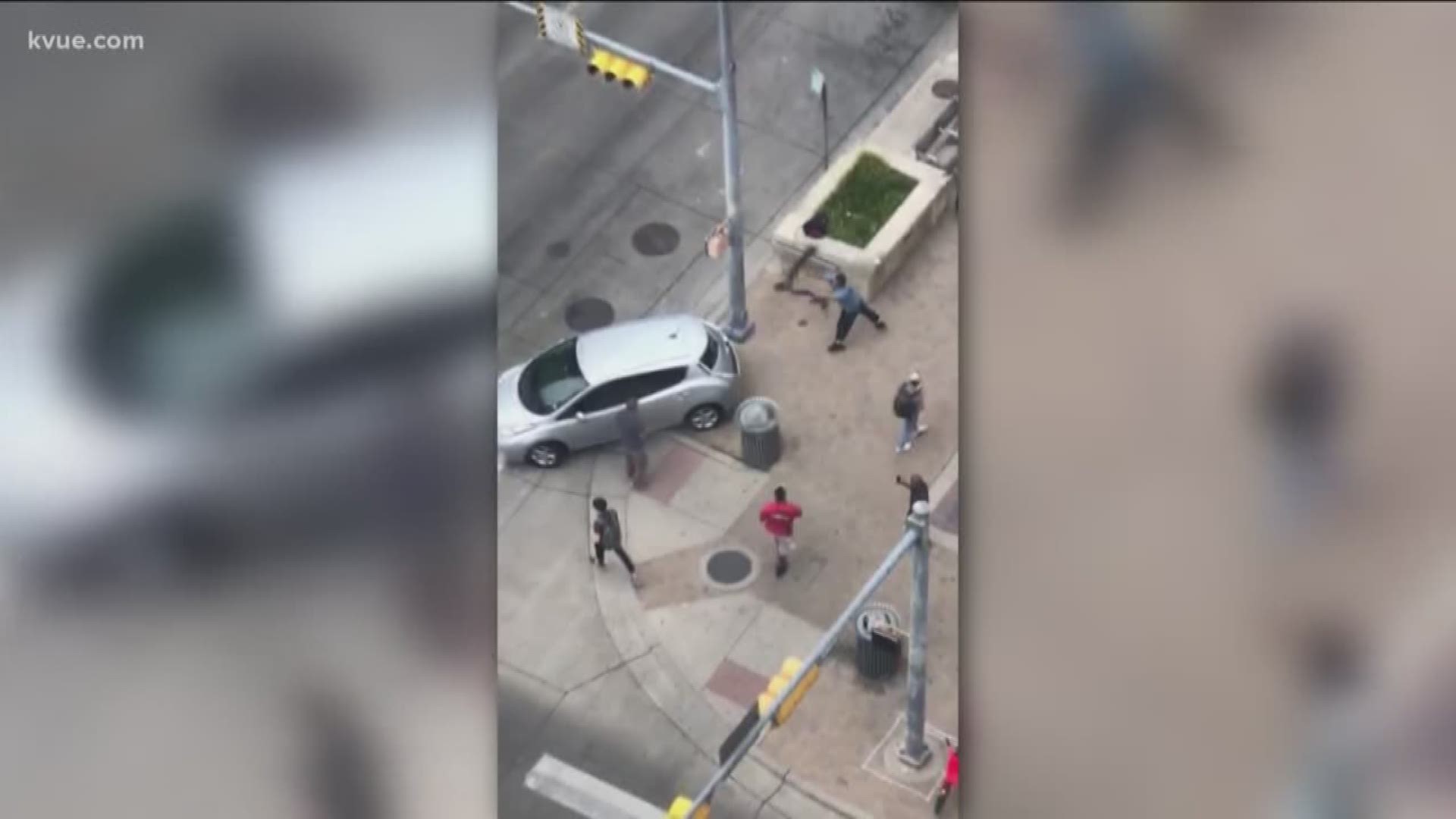 AUSTIN, Texas — The Austin Police Department is asking for the public's help after a video surfaced on social media Wednesday showing two men fighting on a Downtown Austin street. One of them eventually threw an electric scooter through the back window of the other man's vehicle.

According to police, the incident took place at East Seventh Street and Brazos Street around 9:07 a.m. Oct. 9. APD alerted the media two days after the incident that investigators are seeking the public's assistance in gathering video or information about the suspect who threw the scooter. He is described as a white man in his late 20s or early 30s. Police said he was last seen wearing a bright blue shirt with black pants and black shoes.

Anyone with video of this incident or information about the suspect is asked to call police at 512-974-5320. You can also submit tips by downloading APD’s mobile app, Austin PD, for free on iPhone and Android.

After video of the incident was posted on Twitter Wednesday, Texas Gov. Greg Abbott retweeted it, stating, "Watch this video. Is Austin's policy of allowing the homeless to do whatever they wan really helping the homeless? We know it's bad for Austin."

Credit: Video screengrab
As police investigate a scuffle that led a man to throw a scooter through a driver's windshield, police are asking for videos or information about the incident.

However, because a suspect has not yet been identified, Austin police could not confirm if the man involved was indeed homeless.

The driver of the car, Lawrence Black Jr., told KVUE he was driving north on Brazos Street toward Seventh Street when the unidentified man jumped out onto the crosswalk. Police said the driver honked his horn, which led the man to punch the hood of his car and yell obscenities.

"He's just looking at people mean. I said, 'Hey, man. You need to get out of the road 'cause it's a green light.' And I wasn't trying to run him over. I was stopped," Black told KVUE. "He started punching the corner of the car and kicking it. So I backed up and parked the car. At this point, I didn't want to go forward and hit him."

Black said that's when he got out of the car and the scuffle began.

"I got out in between him and the car. He took a swing on me. I just grabbed him close up by his ribs and just kind of bear-hugged him. He's trying to knee me and punch me, but none of it's really hitting me or hurting me," Black said.

Black said he was pinning him on the ground to wait for police to arrive.

As seen in the video, the two begin to go their own way, until the unidentified man walks toward a parked electric scooter.

"He grabs it and just throws the triangle part of it right through the back windshield. Then he took off," Black said.

The APD said Friday that they responded to the scene and searched the area, but they weren't able to find the suspect.

Black, who said he used to be homeless, believes the man is homeless because he has seen him before on the streets. He thinks the man may have had a substance abuse problem and isn't upset with him.

"We have a problem, and it's not homelessness. The problem is drug addictions and housing costs," Black said. "The fact that this guy was that extreme just shows me that he's lost hope, in a sense."

In response to Gov. Abbott's Tweet and the video, which has been watched thousands of times, Mayor Steve Adler sent KVUE the following statement:

"It remains a crime to damage property or harass or assault anyone in our city, period. Watching this video, I can’t tell how it started, who provoked whom, or whether anyone involved is even homeless – but our Police Department is actively investigating the incident."

APD has labeled the incident a criminal mischief case, and it is currently being investigated by APD's Property Crimes Unit.