Officers arrived at the scene and located a vehicle caught in rushing water on a low water crossing bridge. 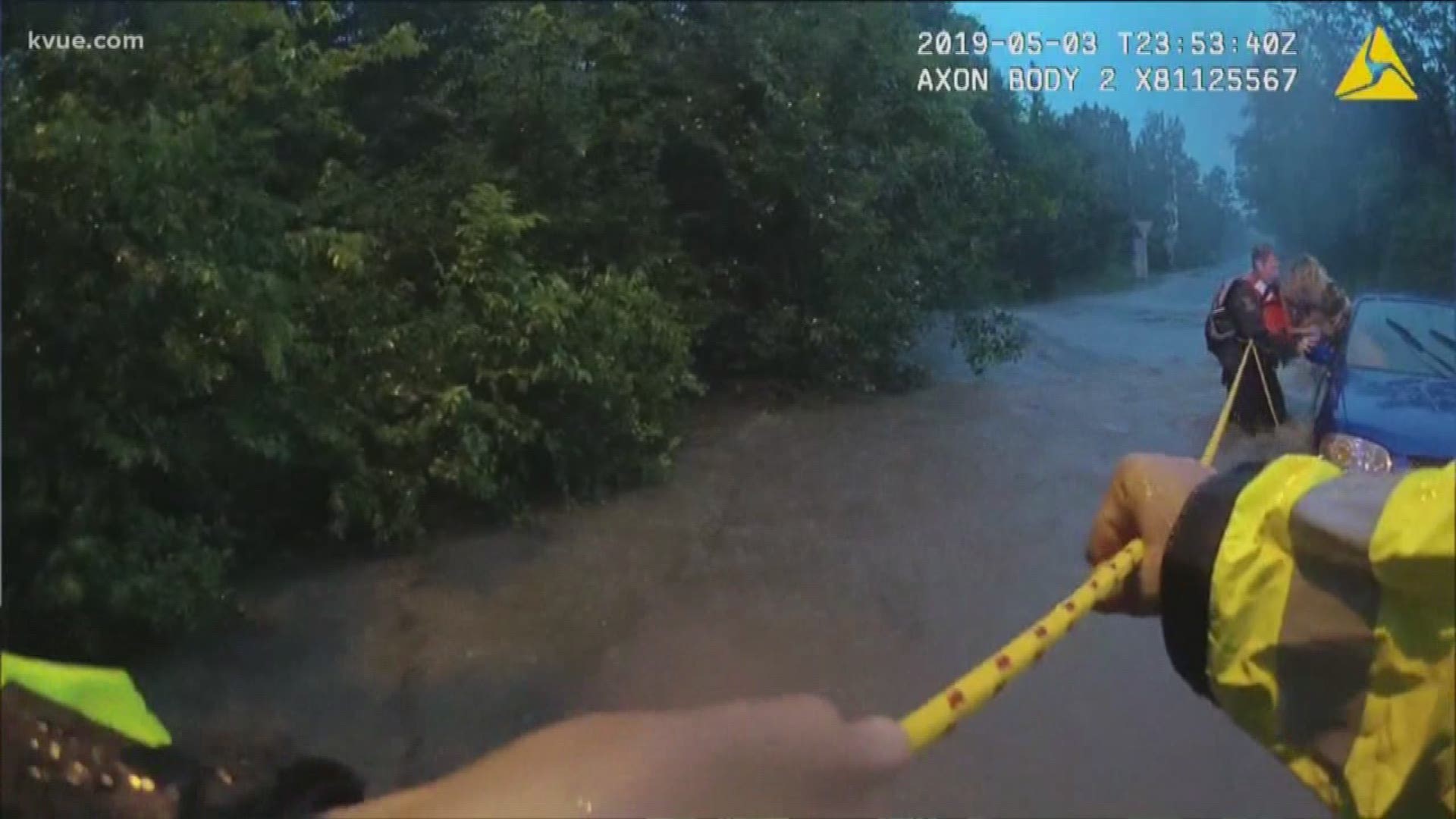 AUSTIN, Texas — Three people and a dog are alive and safe thanks to the efforts of a group of Austin police officers.

On Friday, May 3, Southwest Austin was experiencing heavy rain and flood conditions. According to the Austin Police Department, officers responded to the 6700 block of Old Bee Caves Road after receiving a report of someone hearing a woman crying.

TO WATCH BODY CAM VIDEO OF THE RESCUE, CLICK HERE.

Officers arrived at the scene and located a vehicle caught in rushing water on a low water crossing bridge.

Officers Benjamin Cochran and Matthew Valli said a woman was leaning out of the passenger-side window, screaming for help when they arrived.

Officers quickly created a plan. Officer Valli put on a life preserver and tied a rope to it, while Officers Cochran and Perrydore held the other end of the rope.

"Both Officer Valli and I are former lifeguards, and we had training in the military with helicopters, crashes and things like that in the water. So we were both in the same mindset about how to act within the water. And we didn't really have time to think," Officer Cochran said. "We just applied what we had known. We had some training in the academy as well with throwing the rope to victims, and so we used that training and entered the water. And knew how dangerous it is – even just two to three feet, the current is so strong, it can sweep you off your feet."

"I was like, 'We just need to do something now or they're going to go over, and it's not going to end well,'" Officer Valli said.

Officer Valli entered the rushing water and approached the vehicle as it was getting closer to going over the side of the bridge. The officers removed two women. When the first woman got out, Officer Cochran said the water was low enough for her to walk to them, but it was rising.

They were removing a third woman and a dog when the vehicle continued to move.

Officer Valli was able to get the third woman and the dog out of the vehicle, but the three began to be pulled under the water due to the strong current.

Officer Cochran entered the water and was able to grab a hold of Officer Valli as he held onto the woman and the dog, as Officer Perrydore assisted in pulling them out of harm's way.

According to police, a minute later, the vehicle went over the side of the bridge.

The officers said Tuesday that the women were all between around 19 and 21 years old and the dog was a medium-sized Boxer or similar breed.

When asked how one goes about rescuing a dog in a situation like this, Officer Valli said:

"We never trained for it, so we just learn as we go...You want to do the best you can. I was – hey, I'm a dog lover myself. I'd be upset. I understand like, your human life is a little bit more important, but if I can still rescue the dog, I'm still going to do my best."

RELATED: This single mother of four hit a breaking point. Austin officers stepped in to help

Officer Cochran said the water was about waist-deep at its highest during the rescue but reminded people that the current was strong enough that that didn't matter.

"A human being that weighs 200 pounds isn't going to stand a chance," Officer Cochran said.

After the incident, Officer Cochran said he just started laughing because he was so thankful to be alive.

"I think we were placed there for a reason," he said.

The officers said this particular crossing has been problematic in past flooding situations and that drivers should always be safe during flooding conditions.

"Please, it's not worth it. Turn around, take the extra five, 10 minutes because it's not worth getting caught in your car and potentially drowning," Officer Cochran said.

Officers Valli and Cochran patrol the Southwest area of Austin.