Ed Alderman went missing for four days in a National Park in California. He's now home, but with frostbitten hands and feet. 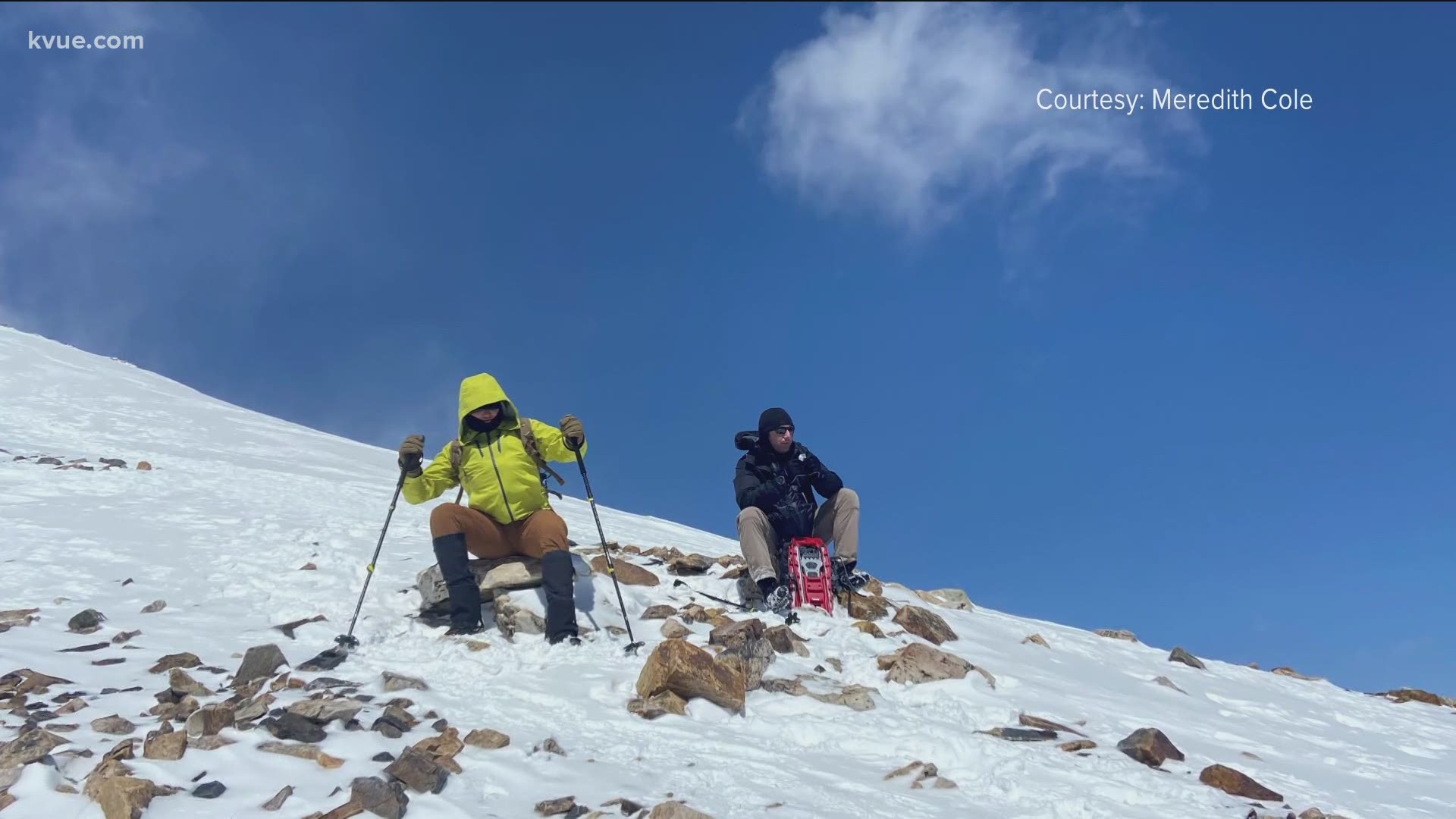 AUSTIN, Texas — Ed Alderman went missing in Sequoia and Kings Canyon National Park at the end of May. He was found four days later near a small lake in the Mt. Whitney area.

Alderman went hiking with his friend and supervisor, Gary Gorrell. Both work in the Texas Army National Guard at Camp Mabry. Both have an affinity for hiking and have summited mountains before.

Alderman said acute mountain sickness (AMS) led him to take a wrong turn on the path down the mountain from the Mt. Whitney summit.

The two hikers had started the day out together, planning to hit the trail camp on that Thursday, then summit on Friday. The weather changed those plans.

"After we looked at the weather situation up there, Thursday was really the only clear day," Gorrell said. "They were expecting to start having snows and bad wind come in on Friday."

"It was either we summit that day, which we had plenty of time to do, or, you know, kind of stay the night and just enjoy the day there," Alderman said. "We decided to go ahead and summit since the weather was good."

On @KVUE, Ed Alderman - the Austin man who went missing in the Mt. Whitney area of @SequoiaKingsNPS - is finally home. He has frostbitten fingers and toes. An avid hiker, Alderman told me Acute Mountain Sickness is what led to him to making a wrong turn and getting lost. pic.twitter.com/MqSIhtAtvp

RELATED: 21-year-old's death in Mission Trails a tragic reminder for all to prepare when hiking alone

As the two friends were hiking to the summit, Gorrell started outpacing Alderman. The two stopped, and Alderman encouraged Gorrell to go for the summit alone since there were plenty of people on the trail. Alderman said he felt safe.

"We've had similar training. I was completely coherent. I knew what I was doing and it was an easy trail," Alderman said. "The conditions aren't easy, but the trail itself was clearly marked. There were plenty of people out that were walking back and forth."

The two decided to meet at the summit. Gorrell summited the mountain first then started to make his way back down. Meeting up with Alderman, they discussed meeting back at trail camp.

Alderman then summited Mt. Whitney on his own. On the way down, he was overcome with Acute Mountain Sickness which he says led to him making a wrong turn. This is video Alderman recorded at the summit. pic.twitter.com/t63Kjzvyrv

On his way down the trail from the summit, AMS overtook Alderman. He made a wrong turn and got lost for days. When Alderman did not return to camp by 8 that evening, Gorrell went looking for his friend.

"I grabbed my stuff and I went back up that part of the mountain, and that's the most significant area of elevation gain," Gorrell said. "I searched until 12, 12:30 in the morning when the weather just got real bad."

Gorrell then went back down the mountain and called for emergency responders.

At the same time, Alderman continued walking under the haze of AMS. By Sunday, he discovered a small lake with fresh water and started calling for help.

"I lay on my back and slid down, you know, the 1,500 feet to get to the open area, started getting freshwater," Alderman said. "By that point, I was completely cognizant of what was happening. I never really panicked."

Luckily, a couple heard him calling for help and reported it to rangers. Rescuers found Alderman and transported him to a hospital in Fresno, California. After a visit to a burn unit in San Antonio, Alderman is now back home in Austin.

He has frostbite in his hands and feet and expects some of his fingers and toes may have to be amputated. Despite the setback, he hopes to get back on the trails and recover by the end of the summer.

"As long as I can walk, which I don't foresee me not being able to," Alderman said. "It's not something I'm going to stop doing. And it's not an ignorant thing. It's just something I enjoy. So I don't, you know, obviously, I'll be much more cautious in going up something like that, but definitely going to continue to pursue it."

The Backstory: When German prisoners of war lived and worked in Bastrop County