In July, many Leander residents were under a boil water notice. The City will discuss short and long-term water solutions during a special meeting on Wednesday. 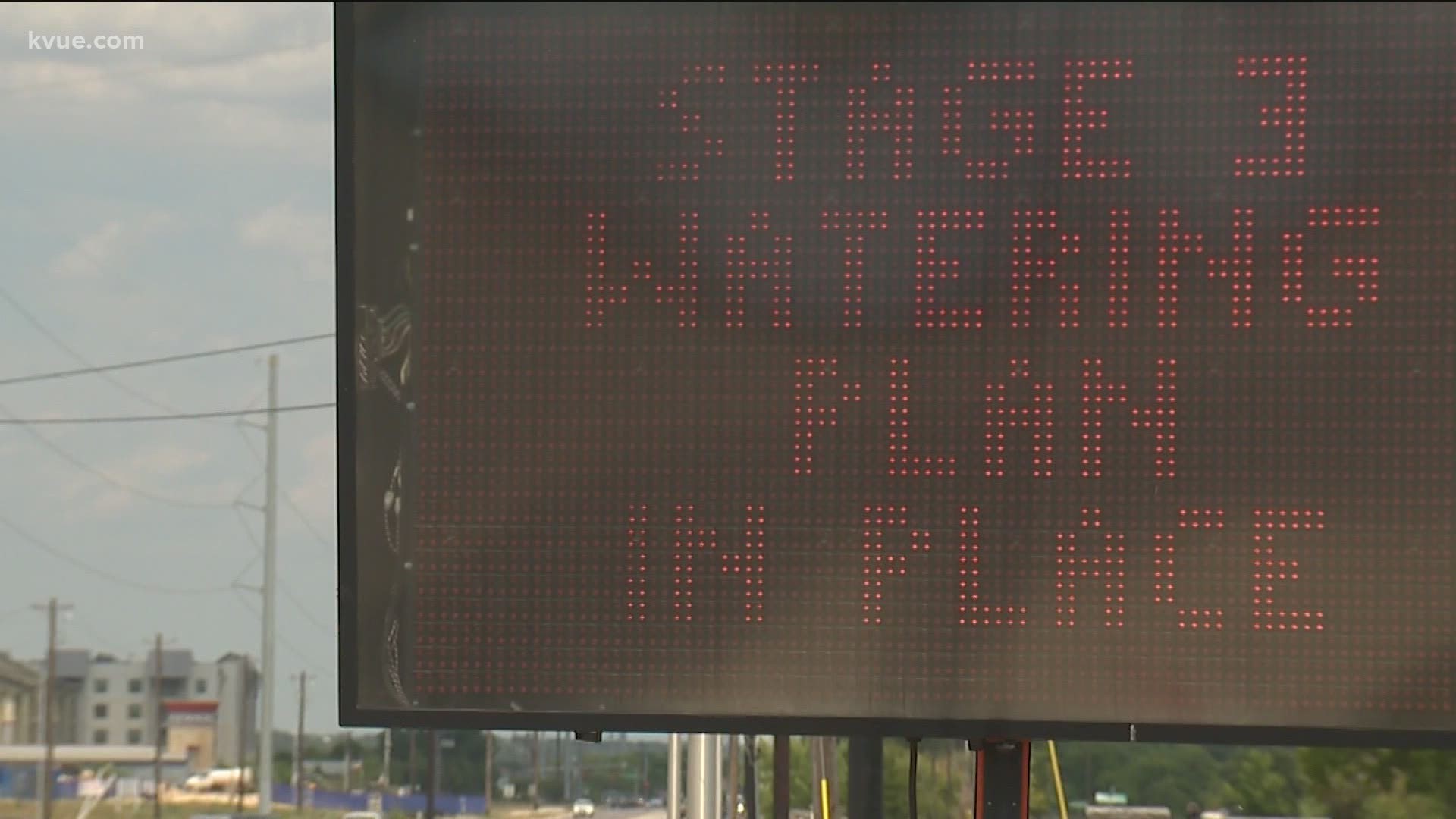 AUSTIN, Texas — As of July 30, Leander water customers are under Stage 3 water restrictions until further notice. According to the City, that means customers have to limit outdoor irrigation to no more than once a week and only before 10 a.m. or after 7 p.m. on designated watering days.

The use of water to wash any vehicle is also prohibited, except at commercial carwash facilities or service stations. Customers are also encouraged to practice water conservation and prohibit any non-essential uses of water.

These restrictions come a little more than a week after the City of Leander was under a boil water notice, which the City said was caused by a "power failure at the Sandy Creek Water Treatment Plant, combined with sustained peak water demands," causing "sharp reductions in water volumes and pressures."

At the time, Leander water customers were already under Stage 2 water restrictions.

The consistent water issues over the last few weeks have concerned some residents.

Regina Kurland, a Leander resident of more than 10 years, told KVUE Monday that this is not the first time there's been some sort of issue with the water – just before she watered her plants with bottled water.

“I think the growth has gone beyond what they were thinking, and I think that possibly is what led to the issues we’re having now," Kurland said. “I don’t feel there’s really a great plan for the growth, and I think that’s maybe what happened with the problem that we have now.”

Kurland added that she's more concerned with the water quality, saying the City should be testing the water more.

According to the City, Stage 3 restrictions are listed as "Severe Water Shortage Conditions," but City Manager Rick Beverlin said it's not exactly a water shortage, but rather an infrastructure issue of getting the water to the residents. Specifically, there are issues with connectivity from the Sandy Creek Water Treatment Plant and the Brushy Creek Regional Utility Authority.

"It's as much the connectivity across the city and between the two facilities and the eastern portion of the city, the western portion – making sure you've got that full water loop," Beverlin said. "Keep in mind, since we're a newer city, infrastructure oftentimes follows development and most of that infrastructure is debt-financed, or it comes along with the developer, or a combination thereof."

Beverlin added that this summer in particular has seen a very high demand since many people are staying home due to the COVID-19 pandemic.

"I don't think anyone would have projected that you would have had COVID, obviously. Plus, high heat and everyone home at the same time for extended periods," Beverlin said. "This is probably a peak in terms of the number of people that would be home given a high heat summer in the history of the city and where the city is in terms of its infrastructure development."

He added that the growth of Leander has played a role in the increased water demand. The U.S. Census Bureau said that Leander was the fastest-growing large city in America between 2018 and 2019.

Back in February, a board report was supposed to be given at a city council meeting on the Brushy Creek Regional Utility Authority, but none was given.

A City spokesperson told KVUE that the Leander City Council will discuss short and long-term water solutions during a special meeting on Wednesday afternoon and will vote on at least one of several proposed capital projects at a regular meeting on Thursday.

"We want everybody to be safe and to know that that we're taking the utmost responsibility with the system, that we're transparent and that we're on the front end of it," Beverlin said.