Aggies honor those lost at '99 Bonfire site, set to honor S.C. QB and his family Saturday

Aggies bowed their heads in silence as they remembered the 12 people who died Nov. 18 1999. 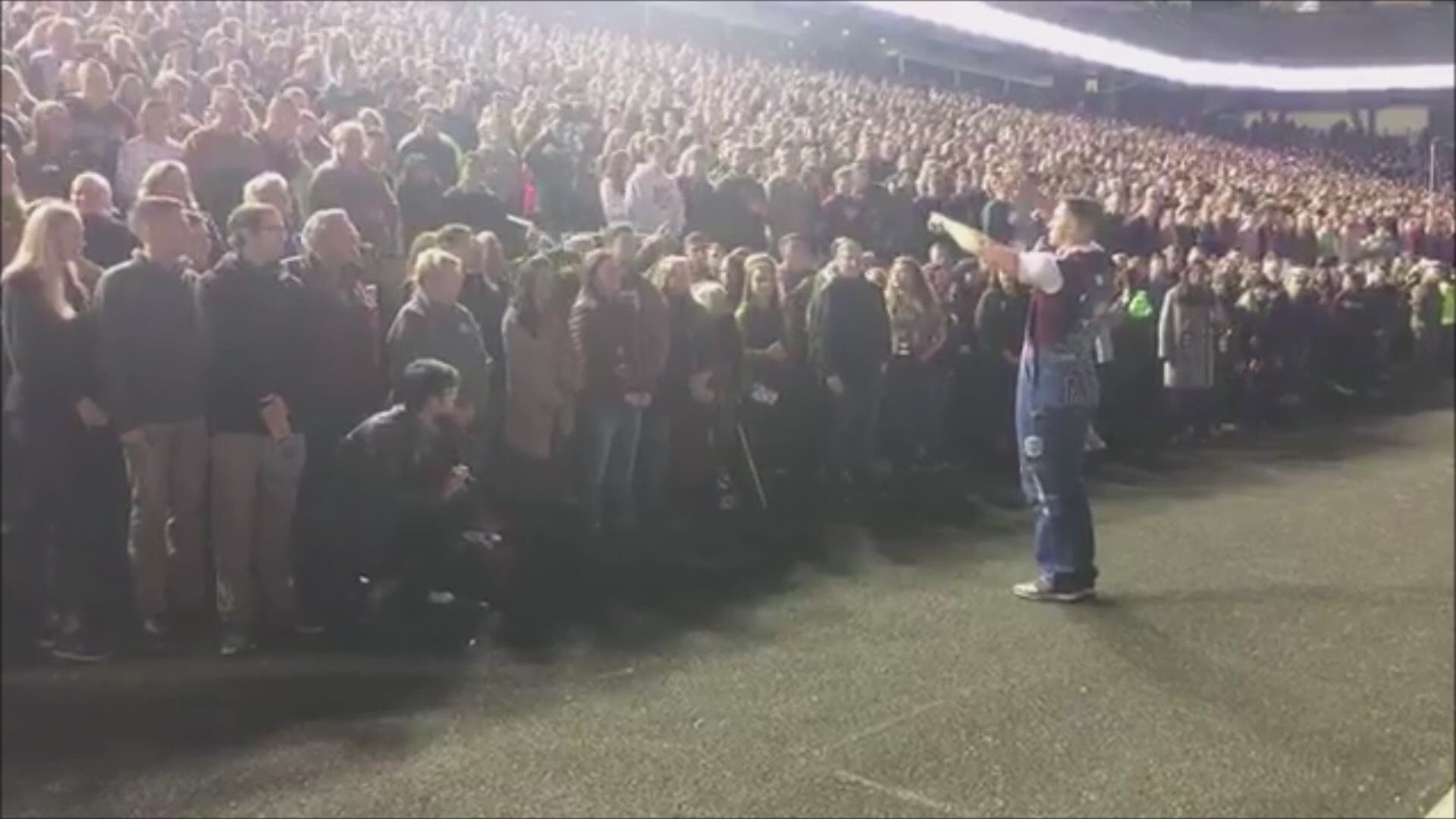 COLLEGE STATION, Texas — "Texas A&M is so much more than just about football. It's about being a family."

Those words came from Aggie Yell Leader Kenny Cantrell during Saturday morning's Midnight Yell at Kyle Field. His words rang true in the stadium, as Aggies past and present bowed their heads at the beginning of Yell to take a moment of silence and honor those whose lives were lost in the Bonfire collapse in 1999.

"Twenty years ago, we saw a tragic accident where we lost 12 Aggies," Head Yell Leader Karsten Lowe said. "We ask now to observe a moment of silence." Thirty seconds passed as thousands of people stood still, heads bowed and remembered those who died:

But, if you had any question in your mind as to how serious Aggies take their core values, perhaps you should take this into consideration. Cantrell, a senior this year, third generation Aggie and a member of the Corps of Cadets, took the mic about 10 minutes into Midnight Yell.

He spoke of the Bible verse he has written on his towel, one from Romans 1:16.

"For I am not ashamed of the gospel," Cantrell recited. "For it is the power of God who gives salvation to everyone who believes." He used the words of the verse to relate to one's passions, something he encouraged everyone gathered to pursue, something, he said, he wouldn't have been able to do without the spirit of Aggieland.

In case you didn't know, the Aggies face off against the South Carolina Gamecocks Saturday night for their final game at Kyle Field this season. Cantrell asked all Aggies gathered for Midnight Yell to honor South Carolina's starting quarterback, Ryan Hilinski, after the loss of his brother, Tyler. Tyler, also a quarterback for Washington State University, died by suicide last year. During an autopsy, doctors diagnosed him with Stage 1 CTE. CTE is a neurodegenerative disease caused by repeated trauma to the brain.

"Aggies, we have a great opportunity to show what the spirit of Aggieland is all about," Cantrell said. "I'm going to ask that during the first play of the third quarter that we don't just stand as the 12th Man. We also stand in support of the Hilinski family."

The Aggies in the stands cheered at the Yell Leader's words. "No matter if we're on defense or offense, I ask that you stay silent and just hold up the number three in support of South Carolina," Cantrell added. "Please show them [South Carolina] that Texas A&M is so much more than football. We are a truly an Aggie family."

It won't be hard to find the great play inside Kyle Field Saturday night.

For all your Texas A&M Aggie football highlights, check out Aggie Sports Overtime, only on KAGS at 10 p.m.

RELATED: BONFIRE: A look back at more than a century of the Aggie tradition

RELATED: BONFIRE: Stack may have changed, but Aggie tradition carries on