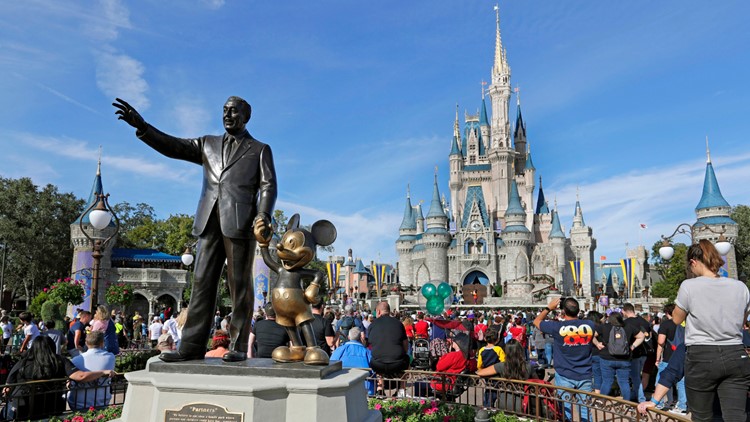 Childless millennials should be banned from Disney World, mom rants

Childless, Disney-loving millennials are firing back after an expletive-filled social media tirade claimed Disney World is only for children and parents.

The lengthy, almost all-caps rant from someone who claims to be a mother of a toddler first popped up last year and went viral again this weekend after @JenKatWrites tweeted a screenshot of the mom's post. The tweet has since garnered more than 17,000 retweets and more than 4,000 replies.

The mom went on to detail a trip when she had to deny her 3-year-old son a Mickey-shaped pretzel because the snack line was too long and she saw another adult (reportedly without children) buy one.

“DW is for CHILDREN!!!!!” the mother continues. “People without CHILDREN need to be BANNED!!!!”

Though @JenKatWrites said she hadn’t yet visited Disney World, thousands of people replied to the tweet thread saying they love visiting the theme parks as childless adults.

Some said they have children, but enjoy the parks more when they don’t have the kids in tow. Others went so far as to point out that many Disney characters, like Mickey and Minnie Mouse, don't have children.

A New York Post writer fanned the Disney outrage flames Friday when he wrote a column about the mother’s rant and followed up by saying, “Sorry, childless millennials going to Disney World is weird.”

Johnny Oleksinski said millennials have an unhealthy relationship with Disney and “another oft ignored problem with letting a kids brand control your adult life is the stupidity and culture ignorance it leads to.”

Oleksinski’s take was not well-received by many people on social media, from childless millennials and parents to those who have been visiting Disney World since the 1970s.

Some questioned whether the “weird” ones are actually parents who bring to Disney World children who are too young to form memories.

For the record, the writer of this article is a childless millennial with a Disney World annual pass who visits the parks every other month or so. It may be weird for others, but this writer doesn’t think it’s weird for her.

Disney World has guides for adults at each park, including where to eat, drink and shop and the best places for after-hours events and tours. CBS News reported the company has been courting adults (both childless and with children) for years, especially those late 20s/early 30s millennials who grew up as “Disney kids.”

A 2018 survey from Morning Consult found about three-quarters of millennials, 75 percent without children and 78 percent with children, said they would visit a theme park in the next year. The survey said this group is also more likely to think a theme park trip is a good value for the price compared to 50 percent of all parents.

But this viral rant and New York Post article aren’t the first to poke at childless couples visiting Disney World.

A Thrillist blogger in 2016 queried: “What’s With All You Adult Couples Who Vacation at Disney World?” The writer says, “I’m not here to judge (well…) I’m just asking you to help me understand your peculiar choice of destination for an amorous getaway.”

After the all-caps rants, name-calling replies and think pieces about why a particular group of people should or shouldn’t be able to enjoy Disney World, many people are hopping into this ongoing social media conversation to say: let people like what they like.

The Washington Post spoke with 35-year-old pharmacist Nikida Metellus, who lives near Disney World in Orlando. She runs the ThemeParkHipster blog and has a guide for those wanting to visit the parks by themselves. She said she still enjoys child-free park days even after having a daughter almost two years ago.

“I don’t think they’re weird,” she said to the Post. “We all just think that Disney is made for everyone who wants to go there and have a magical time.”

One final note: A Disney booklet from 1979 is advertising the perks of the parks for adults, saying “70% of our kids are adults.”

This 40-year-old ad says “Big ‘kids’ make up the majority of our guests -- and enjoy the Magic Kingdom just as much (if not more!) than any youngster.”