Dockless scooters can be left anywhere from sidewalks, intersections, you name it. But imagine trying to get past them if you have trouble seeing.

AUSTIN, Texas — You see dockless scooters everywhere and, for the blind and visually impaired, that's part of the problem.

The Texas School for the Blind and Visually Impaired sent a petition to the City back in November with a list of concerns. Now they're hoping to raise awareness before anyone gets seriously hurt.

“For me, it's the dimmer lighting that's harder,” said Cindy Bachofer, who is visually impaired.

For Bachofer, getting around has its challenges. She can't see out of one eye and has "low vision" in the other. During the day, she uses a handheld scope to see certain distances and she can't see well at night. That led to a close call with a scooter about a month ago.

“It just blended in because there really wasn't lighting around it and my foot hit it as I realized, you know, there's something there,” said Bachofer.

She said the increase in scooters around town is a concern for her and many others.

“It's an unexpected obstacle in your path and if you can't see that, it's there because it shouldn't be,” said Bachofer. “It's just an item that has been dropped, then you're more likely to trip and it causes injuries."

At end of 2018, she and nearly 200 others signed this petition from the Texas School for the Blind and Visually Impaired. 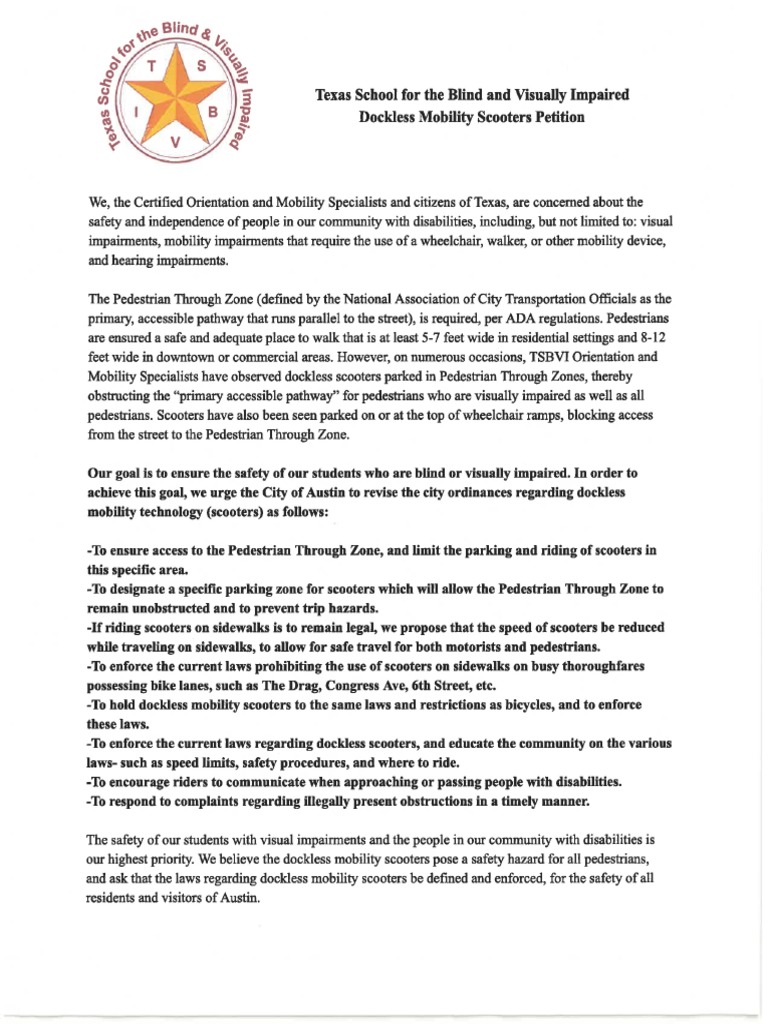 They're asking for the Austin Transportation Department to limit the parking and riding of scooters on sidewalks and for them to require slower speed limits in those areas.

But the City is creating "parking boxes,” like the one on Fifth Street and Pleasant Valley, which are designed just for scooters and bikes.

After her close call, Bachofer is asking just one thing from riders.

“Think about where you're putting it and how it impacts others,” she said.

So far, there are only seven "parking boxes" around Austin. The City hopes to add many more.

If someone sees a scooter that is out of place, the City said you can call 311 and someone should remove it within two to four hours.

A rider ordinance will also be previewed this spring.

The City addressed many of the concerns listed in the petition below:

Rule Changes Based on Comments

Agree. Added incentives in the rules for the providers to develop strategies that promote good parking and riding behaviors.

L. Licensee shall employ an electronic method to test the vehicle user no less than one out every 5 rentals, on proper usage, ADA accessibility and vehicle parking prior to allowing the usage of a dockless vehicle as approved by the Director.

M. Licensee shall participate in City of Austin initiatives that raise awareness for accessibility, mobility and the safety of pedestrians and mobility unit users.

Agree. We believe that the addition of parking boxes, as proposed in the rule, will create a more orderly right of way environment.

E. Licensees shall pay the City for the costs associated with the installation and maintenance of Parking Boxes at a ratio of 5% of total fleet size, at locations selected and approved by the Director, per Director-approved specification(s).

Agree. ATD is currently working collaboratively with APD and dockless providers on safe riding campaigns and is evaluating the best way to transmit to the traveling public that certain thoroughfares are off limits for riding. We also are adding incentives in the rules for the providers to develop strategies that promote good parking and riding behaviors. Section 4

Agree, however the City actively seeks out illegally or improperly placed units. We believe that the current list of categories would cover almost all situations encountered.

D. Licensees shall respond to complaints and obstructions within the following time frames:

Other obstructions and nuisances – 2 hours;

Unauthorized portions of parks and trails – 2 hours; and

Additional ordinance amendments related to rider behavior need to be modified in a separate section of City Code.

Agree. ATD is currently working collaboratively with APD and dockless providers on safe riding campaigns and is evaluating the best way to transmit to the traveling public that certain thoroughfares are off limits for riding.

Agree. Additional ordinance amendments related to rider behavior need to be modified in a separate section of City Code.