An early glimpse at how Hispanics, Latinos may have voted in the 2020 election

Some South Texas counties, which have a higher Hispanic/Latino population, flipped from blue in 2016 to red in 2020. But experts say more data is needed. 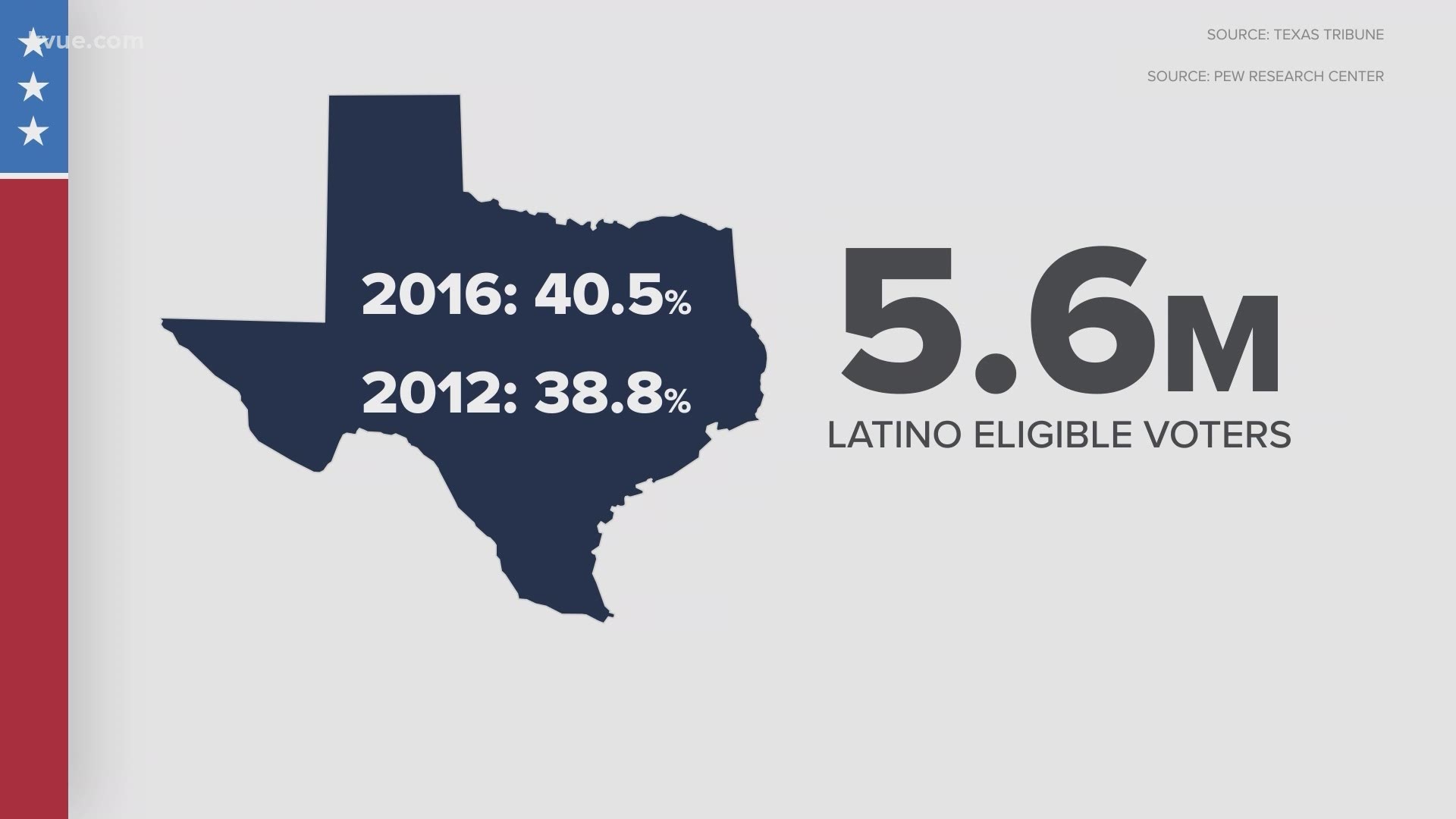 AUSTIN, Texas — Experts said that this election would be greatly impacted by who Hispanics and Latinos voted for.

Data from the U.S. Census Bureau shows 39.7% of Texas's nearly 29 million residents are Hispanic or Latino. According to the Pew Research Center, Texas ranks second among the top five states – only behind California – with the most eligible Latino voters, with around 5.6 million.

As for the 2020 election, an exit poll for Texas from the New York Times – citing the Edison Research for the National Election Pool – shows a preliminary estimate that 59% of Hispanic/Latino voters cast ballots for projected winner Joe Biden, while 40% voted for President Donald Trump.

In other states like Florida, the Associated Press reported that Cuban voters aided President Trump's victory in that state, with 58% of them voting for him. Cuban voters were 5% of the electorate in Florida, according to the AP.

But in states like Arizona, the AP reported that 18% of the electorate was Latino and 59% of them voted for Biden, while 38% voted for Trump.

In Texas, several counties flipped from blue in 2016 to red in 2020, including several in South Texas that are considered rural but have a high Hispanic or Latino population.

Credit: KVUE Staff
Jim Wells, Kleberg, Kenedy and Zapata counties all flipped from blue to red in the 2020 election.

"On the one hand, it's a surprise Trump did better in South Texas than I might have expected," said Raul Madrid, a professor in the Department of Government at the University of Texas at Austin who specializes in Latin American politics among other things.

"On the other hand, the counties that flipped are basically very rural counties. They are heavily Latino. But remember, in general in Texas, even though Latinos are 40% of the population, it's typically only around 20% of the electorate," Madrid continued. "Moreover, in Texas, the Anglo population in rural areas votes very heavily Republican. We're talking upwards of 80%. And so, so, you need to take that into consideration when you're examining these counties."

Madrid added that President Trump's campaign proved impactful in other states for the Latino vote, like in Florida.

"I think there's some evidence this year that the Trump campaign was successful in courting Latinos in Florida, particularly by accusing Biden of being a socialist and all that," Madrid said. "It was certainly effective with Cubans, with Venezuelans, who are very anti-socialist because of experience and in their countries of origin. And so, I think that was fairly successful."

He also believes that there could be a misconception that Latinos will be completely different from general trends of the populations.

Madrid also said it's important to note that the preliminary surveys of how Latino or Hispanic voters voted aren't representative of the total vote for that demographic.

"One, they still need to be weighted based on the actual vote. So, there's always some adjustments made to them," Madrid said. "And this year is particularly a bad year for exit polls because of the mix of mail-in voting and day-of ... voting. So, of course, if you are doing an exit poll that's mostly of people voting on Election Day, it's going to be biased towards Republicans because more Republicans voted that way. So, it'd be biased towards Trump. So, I think we need to take these surveys with a grain of salt, at least for now, and wait until we have more reliable surveys of the Latino population."

WATCH: 2020 Election: The fight for the Latino vote