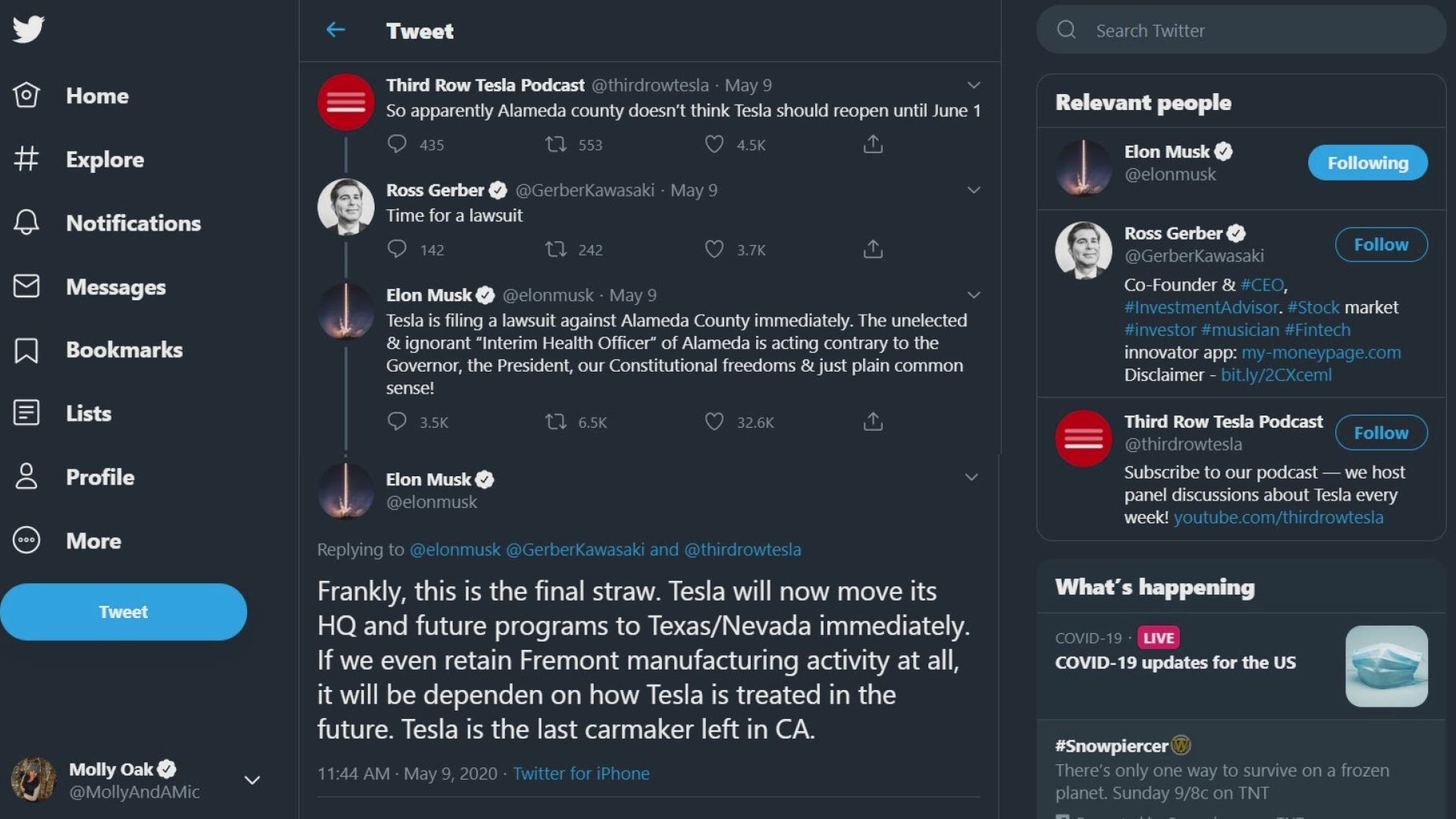 The governor's office told KVUE based on the conversation, Musk is frustrated in California and interested in Texas.

Abbott didn’t offer any further details about his conversation.

On Saturday, the electric car company CEO said Tesla was moving its operations to Texas and Nevada “immediately,” in response to Alameda County – where the company’s Fremont, Calif., plant is based – advising Tesla to remain closed until June 1 amid the coronavirus pandemic.

Former head of economic development for the Austin chamber of Commerce, Angelos Angelou said as a growing tech hub Austin would be the perfect place for the factory.

"I think our city will do whatever to recruit him here," said Angelou." It would bring thousands of jobs, it would bring significant investment."

Gov. Greg Abbott retweeted the Tesla CEO’s message on Saturday, using an “eyes emoji” to suggest he is paying attention to the situation.

“I can definitely say that Texas is a different state than California when it comes to bureaucracy and approvals of permits," said Angelou. "I think our governor and city of Austin would welcome musk with open arms."

Angelou believes Musk has visited Austin already to find a prospective site for the factory.

"I presume some of the regulatory work has already begun months ago," said Angelou. "I'm sure Tesla and Elon Musk has been in Austin and they've been shown sites in Austin and perhaps other places in the state of Texas."

Angelou added, "So, a particular location or locations have been identified."

Angelou said once a decision is made he believes it will take a year to 15 months to build a new factory.

On Monday, Tesla defied the county’s stay-home orders and reopened its California factory.

Musk tweeted, "Tesla is restarting production today against Alameda County rules. I will be on the line with everyone else. If anyone is arrested, I ask that it only be me."

The restart defied orders from the Alameda County Public Health Department, which has deemed the factory a nonessential business that can't fully open under virus restrictions. The department said Monday it warned the company was operating in violation of the county health order, and hoped Tesla will "comply without further enforcement measures" until the county approves a site-specific plan required by the state.

The plant apparently continued operations on Tuesday, and it wasn't clear whether Tesla met a 5 p.m. PDT deadline to submit a site-specific plan to protect worker safety.

State law allows a fine of up to $1,000 a day or up to 90 days in jail for operating in violation of health orders.

Musk said Tesla is filing a lawsuit against the county, calling the interim health officer “ignorant.”

“Frankly, this is the final straw,” Musk said on Twitter. “Telsa will now move its HQ and future programs to Texas/Nevada immediately. If we even retain Fremont manufacturing activity at all, it will be dependen [sic] on how Tesla is treated in the future. Tesla is the last carmaker left in CA.”

Tesla contends in the lawsuit that Alameda County can't be more restrictive than orders from the California governor. The lawsuit says the governor's coronavirus restrictions refer to federal guidelines classifying vehicle manufacturing as essential businesses that are allowed to continue operating.

County Supervisor Scott Haggerty, who represents Fremont, said he's been working on the issue for weeks trying to find a way for Tesla to reopen in a way that satisfies the health officer. He said officials were moving toward allowing Tesla to restart May 18, but he suspects Musk wanted to restart stamping operations to make body parts needed to resume assembling electric vehicles.

Tesla has a plan to maintain worker safety, including the wearing of gloves and masks, installing barriers between workers and maintaining social distancing. Haggerty said the company initially pushed back on checking employee temperatures before boarding a company bus to get to work. But Tesla relented, he said, and agreed to check workers.

Musk has been critical of the shutdown in response to COVID-19, tweeting on April 29, “FREE AMERICA NOW.”

It’s not the first time Musk has teased moving manufacturing to Texas. In February, he changed his Twitter bio location to Austin temporarily, leading some to believe he was hinting that Tesla would be joining the bustling tech scene in the capital city.

He also posted a simple Twitter poll, asking, “Giga Texas?” along with the voting options of “Hell yeah” and “Nope.”

Ed Latson, Austin Regional Manufacturers Association executive director, was optimistic about the tweet at the time.