These Austin businesses are bubbling their way to the top of the industry, with a shared love of doing business in Central Texas. 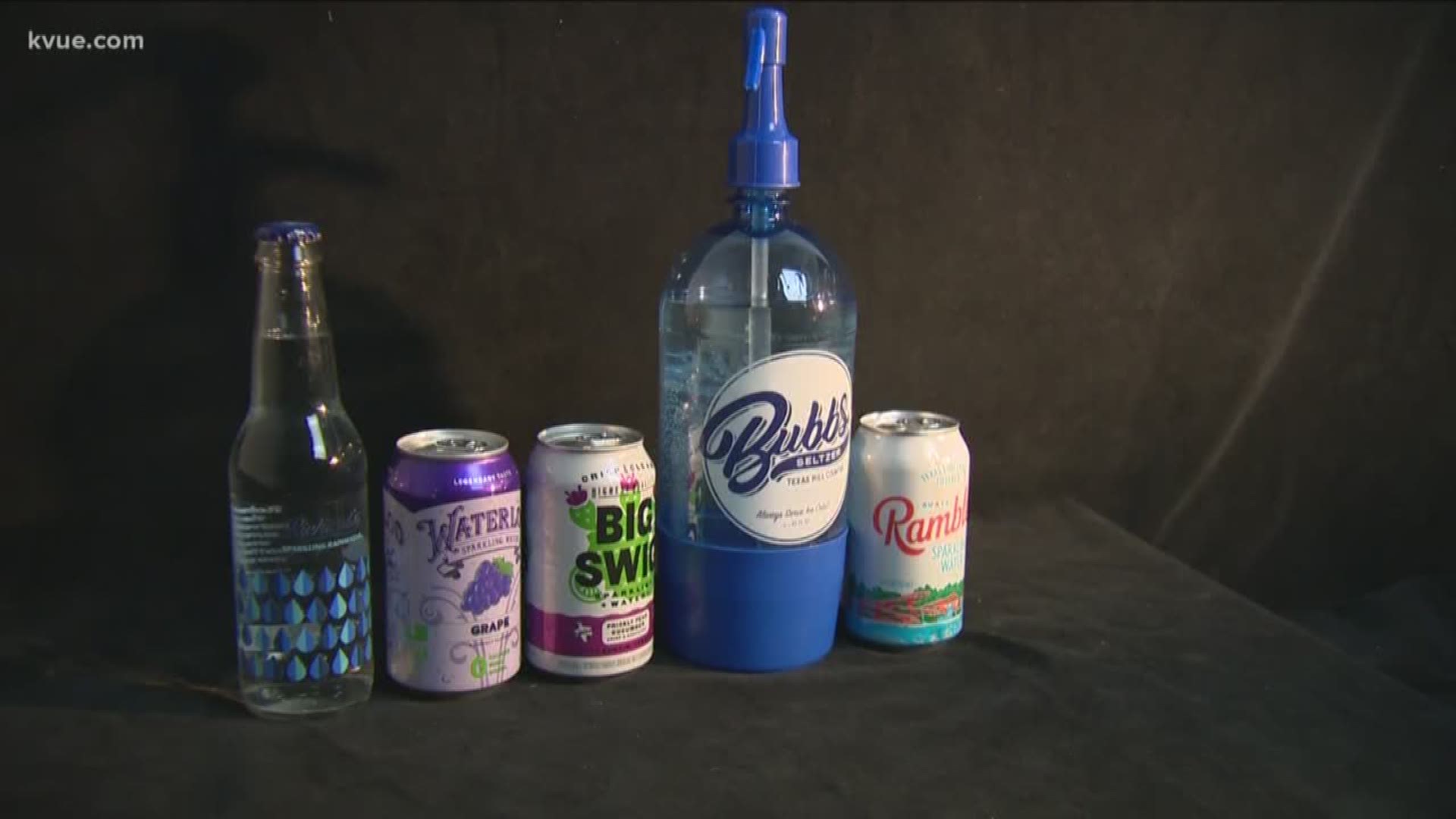 AUSTIN, Texas — Sparkling water has been growing in popularity across the country for the past several years.

From cans to bottles to siphons, Central Texas has at least five sparkling water industry leaders.

It’s an industry expected to do $5.5 billion in sales this year. From 2014 to 2018, sparkling water sales grew 54% in the U.S. as Americans spent billions on the fizzy waters.

Austin business owners got in on the craze years ago, as people started getting away from sugary sodas or other drinks.

Now, they’re doing business across Texas and some in other states.

In Dripping Springs, Tank Town is home to Richard’s Rainwater.

“Every drop of our rainwater has never touched the ground and it's never touched a chemical of any kind. We capture it using a proprietary process that's focused on utilizing mother nature's own natural purification process,” CEO Taylor O’Neil said.

The company is focused on shortening the path from cloud to bottle.

When it rains, a proprietary system captures the water. They flush the first 10 minutes of any rain event, then store the rest in tanks that are kept clean using ultraviolet lights. The water ends up bottled.

RELATED: Verify: Is it safe to hydrate with sparkling water?

“It tests more than 100 times cleaner than the strictest bottled water standards in the country,” O’Neil said.

The water must be brought to near-freezing temperatures before gas is added. O’Neil said the bubbles last for at least 24 hours after a bottle is opened.

The company ultimately wants to capture rain all over the U.S., bottle it, and provide it to people in nearby communities.

“Because of rain's natural cleanliness, we have a process that's less wasteful, less energy-intensive and chemically free,” O’Neil said. “It's the only source of clean drinking water that doesn't deplete our existing resources.”

Waterloo goes big on flavor, aiming to satisfy the urge of people who are trying to cut out sugared, flavored drinks.

“I kind of think early on in the sparkling water category, you felt a little bit of a sacrifice when you moved over to a flavored sparkling water,” CEO Jason Shiver said. “Now I think that that's starting to minimize.”

The company has a variety of flavors – some that taste like grape soda or summer-ripe strawberries.

A team of two people focus on getting the flavors perfect, and sometimes spend up to six months doing so.

“Quite frankly, what puts us on the map are some of the different flavors – so it's our watermelon, it's our black cherry, the grape is doing extremely well, the strawberry,” Shiver said. “The ones that are a little bit – using a baseball analogy – but a little bit off the plate, those are the ones that are performing the best for us.”

Waterloo first shipped products in 2017. Now, it’s in every state across the country. Around 150 million cans were sold in 2019 and that number is expected to double in 2020, Shiver said.

“We're just focused on getting our brand across the country and just making sure we gain that distribution. We make this city proud in the things that we're doing and what we stand for,” he said.

“We saw sparkling water was gigantic and there wasn't anything from Texas for Texans,” managing partner Sean O’Connor said. “We work really hard to stay in a Texas lane, to be able to put out flavors that are not only unique, but uniquely Texas.”

Those flavors include things like prickly pear cucumber, chile mango and even party pickle.

“Austin feels to be the tip of the sphere for the state of Texas, but really is wildly influential around the country,” O’Connor said.

Freshly made seltzer, straight to your door – Bubb’s Seltzer launched in 2019 and offers home (or work) delivery every three weeks.

“There's really no other choice if you want something that's zero waste. Ultimately, everything else is going to be a packaged product that ends up in the trash,” owner Drew Majoulet said.

He was born and raised in the San Francisco Bay area, where a local seltzer shop inspired his work here in Central Texas.

“People see our bottle, they remember when they were a kid. Maybe their grandmother had it. They're excited again about it and they want to take it home and share it with their family,” Majoulet said.

He works out of a San Marcos garage, where Texas Hill Country water goes through a softener, carbon filter, activated charcoal filter and a paper filter, before going through a ultraviolet purification bulb.

The water is chilled, pumped into a European hand-built machine, and carbonated at about 100-pound force per square inch (PSI).

“Getting this concept across to people was very difficult,” Majoulet said. “It's not until you have the bottle in front of somebody that you can show them how it works and the possibilities available to them with the product.”

The water is created and canned at Austin Beerworks in North Austin.

“It was really important to us that we not tap an aquifer or a spring,” Mead said. “We're a sustainable water in that we use an existing municipal water, but we filter it further using a limestone filtration, so we add minerals back into the water.”

Those minerals include calcium, magnesium and potassium, but the water is sodium-free.

It started off as a small, craft water in Austin that’s now in four different states, including Louisiana, Arkansas and Oklahoma. The company plans to produce five times as much water in 2020 compared to 2019.

“We want to be part of this movement to get kids off soft drinks and provide healthier options,” Mead said, “The soda industry continues to decline, and that's why you're seeing an explosion of sparkling waters.”

RELATED: Coca-Cola to debut sparkling water with a splash of caffeine

The company is also partnered with the Texas Parks and Wildlife Foundation to raise awareness for land and water conservation.

Austin has proved a successful place to call home.

“Austinites will support a local business like nobody else,” Mead said. “We're made here in Austin, by Austinites, at Austin Beerworks.”