Elon Musk says Tesla to move headquarters to Texas 'immediately', is it Austin?

"I'm sure Tesla and Elon Musk have been in Austin and they've been shown sites in Austin," said economist Angelos Angelou. 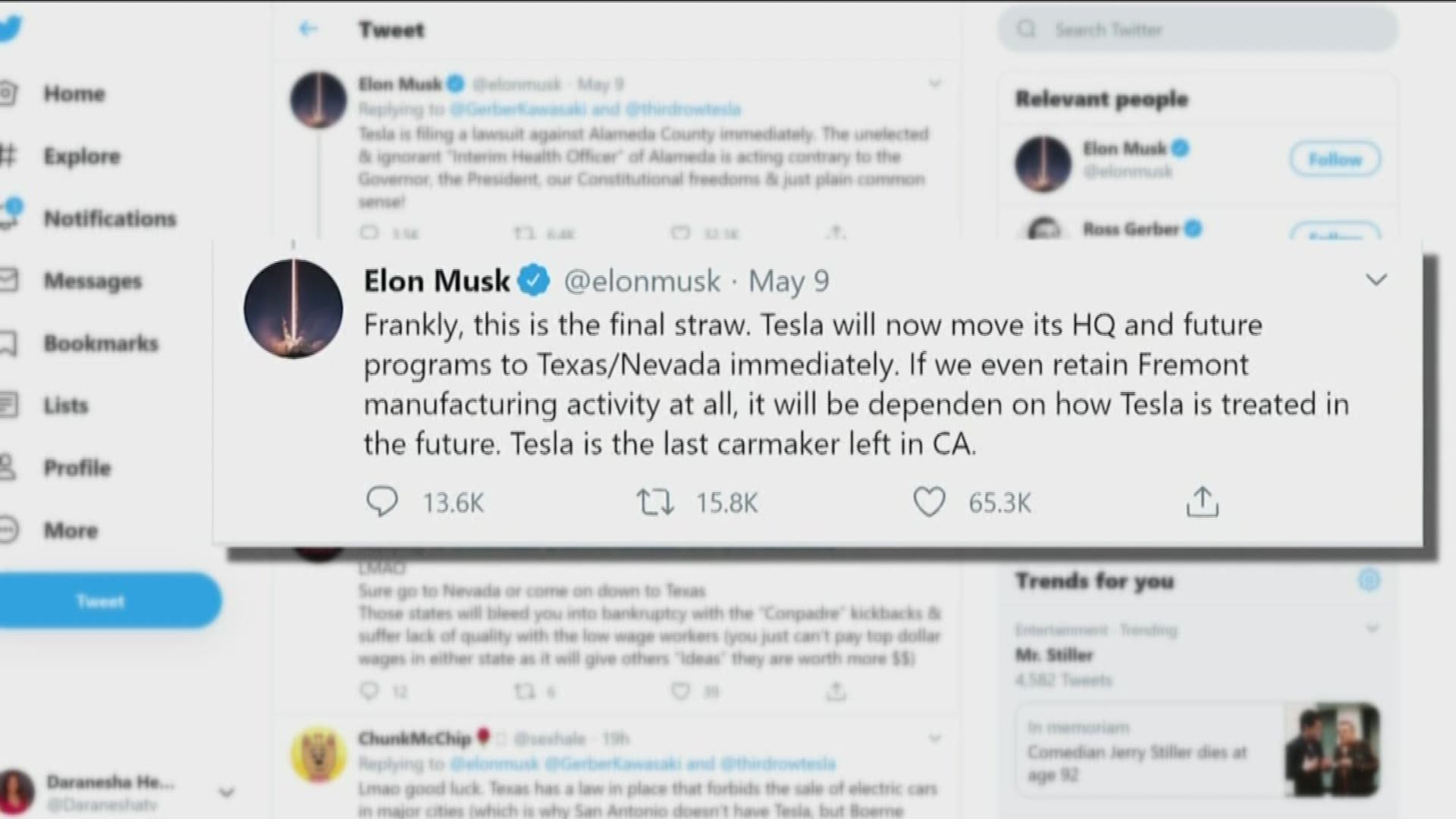 AUSTIN, Texas — Things continue to boil over between Tesla CEO Elon Musk and Alameda County where the company’s Fremont, Calif., plant is based.

Musk tweeted Monday May 11, "Tesla is restarting production today against Alameda County rules. I will be on the line with everyone else. If anyone is arrested, I ask that it only be me."

On Saturday, the electric car manufacturer said he will move its headquarters and future programs to Texas and Nevada “immediately,” in response to Alameda County advising Tesla to remain closed until June 1 amid the coronavirus pandemic.

“Frankly, this is the final straw,” Musk said on Twitter. “Telsa will now move its HQ and future programs to Texas/Nevada immediately. If we even retain Fremont manufacturing activity at all, it will be dependen [sic] on how Tesla is treated in the future. Tesla is the last carmaker left in CA.”

Former head of economic development for the Austin chamber of Commerce, Angelos Angelou said as a growing tech hub Austin would be the perfect place for the factory.

"I think our city will do whatever to recruit him here," said Angelou." It would bring thousands of jobs, it would bring significant investment."

Gov. Greg Abbott retweeted the Tesla CEO’s message, using an “eyes emoji” to suggest he is paying attention to the situation.

“I can definitely say that Texas is a different state than California when it comes to bureaucracy and approvals of permits," said Angelou. "I think our governor and city of Austin would welcome musk with open arms."

Angelou believes Musk has visited Austin already to find a prospective site for the factory.

"I presume some of the regulatory work has already begun months ago," said Angelou. "I'm sure Tesla and Elon Musk has been in Austin and they've been shown sites in Austin and perhaps other places in the state of Texas."

Angelou added, "So, a particular location or locations have been identified."

Angelou said once a decision is made he believes it will take a year to 15 months to build a new factory.

Musk has been critical of the shutdown in response to COVID-19, tweeting on April 29, “FREE AMERICA NOW.”

It’s not the first time Musk has teased moving manufacturing to Texas. In February, he changed his Twitter bio location to Austin temporarily, leading some to believe he was hinting that Tesla would be joining the bustling tech scene in the capital city.

He also posted a simple Twitter poll, asking, “Giga Texas?” along with the voting options of “Hell yeah” and “Nope.”

Ed Latson, Austin Regional Manufacturers Association executive director, was optimistic about the tweet at the time.

KVUE has reached out to Tesla for a statement.