Homeowners from Austin neighborhood Edinburgh Gardens have seen an influx of letters from people wanting to buy their homes. 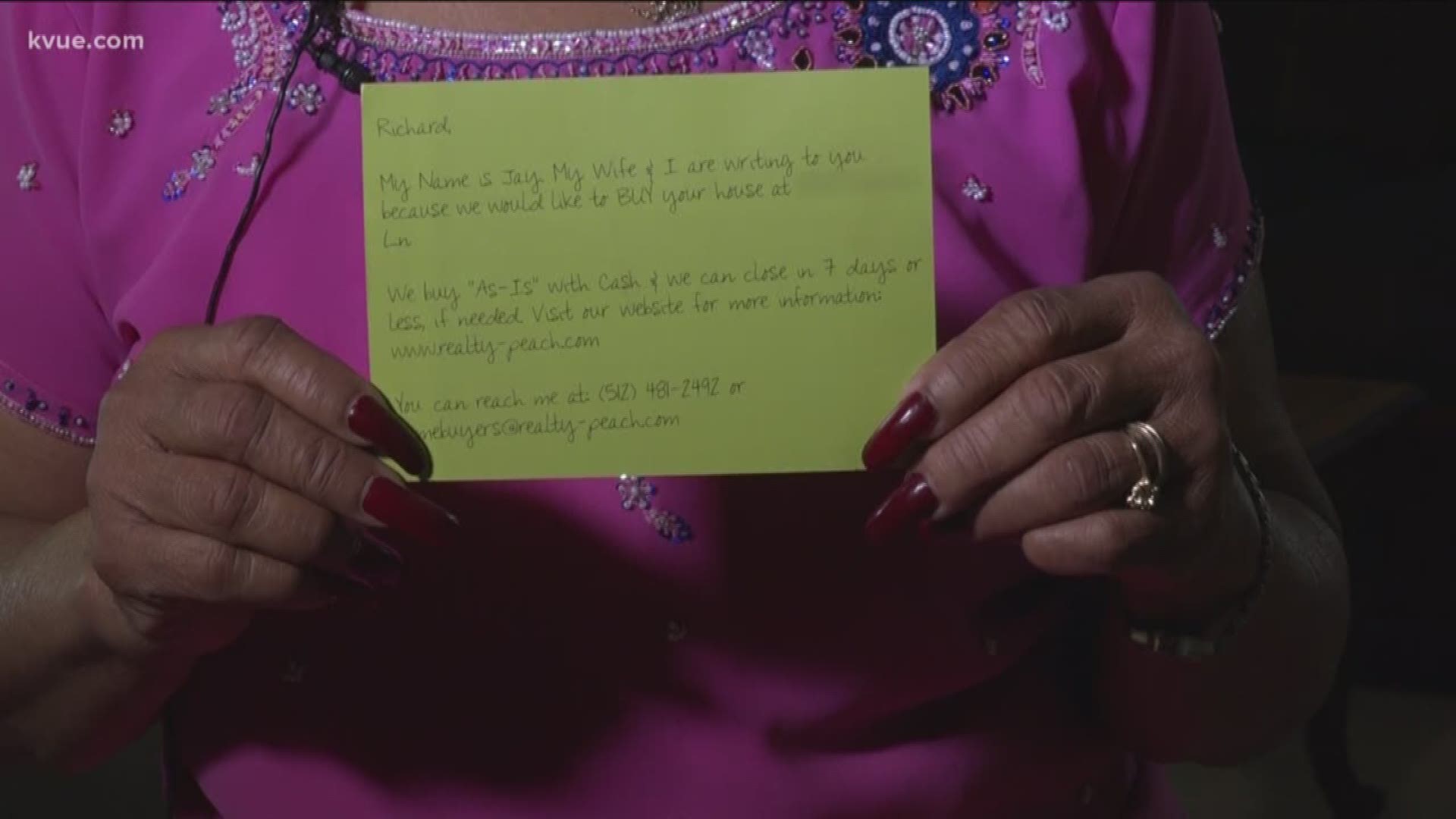 AUSTIN, Texas — There is growth happening all around Central Texas, causing many different types of side effects. For one Austin community, homeowners are dealing with some investors looking to take advantage of what's to come.

Faye Greer has lived with Richard Harper in their northeast Austin home for about two and a half years. These two live in the neighborhood Edinburgh Gardens.

RELATED: Helping Austin businesses make it in a Boomtown

"It's changed tremendously," Greer said. "All of a sudden, we started seeing all of these for sale signs in the neighborhood, and we said, 'Something's going on.'"

Greer first started to notice "for sale" and "sold" signs in the front yards of a lot of homes. It was soon after she started to get letters in the mail from investors or home buyers wanting to buy her house.

"We get these letters once a week," Greer said. "We get them all the time. It never fails. We go to the mailbox and they're there."

Harper has been in Austin a bit longer, 11 years. He said half of the houses in his neighborhood weren't even there when he moved to town.

"It was nice and quiet," Harper said. "You could go up on Parmer [Lane]. There would be smaller horse ranches and stuff, but it's all kind of disappearing."

Other homeowners around the area have received similar letters, often times looking like personal letters or handwritten letters. Wes Farris is a homeowner in Edinburgh Gardens as well, and he said he's lost count of how many of these letters he has received.

"Primarily here, it's just been our little island," Farris said. "It's not like this neighborhood is anything special than all the other ones right now. We get at least one or two a week, and some will look like a handwritten note, like my mother sent the letter to us or something -- just getting you to open it up."

Austin Board of Realtors president Kevin Scanlan said many of these letters are from what they call iBuyers.

"These are large companies that have major financing in the hundreds of millions and even billions of dollars to go out there and purchase homes, often at a price that's below the market value," Scanlan said. "In return for that, the home seller is going to get, yes, a lowered home sale price, but it's going to be fast, sometimes five, seven or 10 days. They're going to be able to have the convenience of selling quickly."

We did reach out to one of the people who is sending the cards, Jay Kohli. He is in Austin and told KVUE he sees this area of Austin on the brink of expansion. He is hoping to benefit financially.

For Greer and Harper, though, they have no interest in selling. They just wonder why all these home buyers are interested in their neighborhood.

Right next to this neighborhood is a multi-use complex in the works known as East Village. Some are calling this a Domain-like facility. Scanlan said the successful development of this project would inevitably make home values rise, allowing any of these home buyers to potentially sell it again, for more money, in the future.