Nothing is set in stone yet, but the possible development would sit next door to "Project Charm," which is rumored to be Amazon's future warehouse. 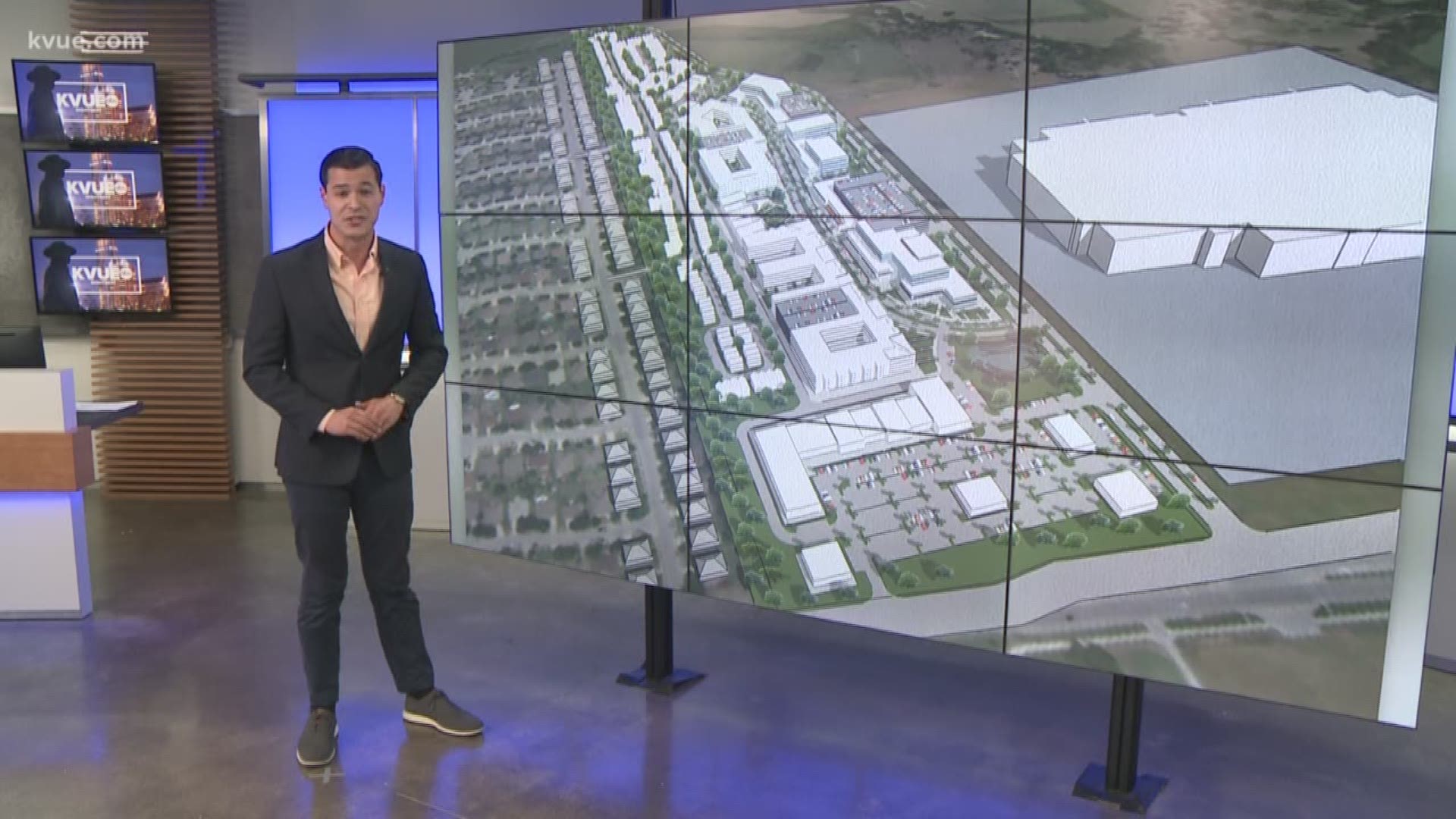 PFLUGERVILLE, Texas — The Pflugerville City Council will consider rezoning 150 acres off Pecan Street near State Highway 130 in Pflugerville at a meeting on March 24.

Known as "Timmerman 2020 Rezoning," the rezoning could potentially make way for some sort of development. The development would sit directly west of "Project Charm," which will be a 3.8 million-square-foot distribution and logistics center. That had rezoning approved in January.

According to the Austin Business Journal, Project Charm will be a distribution facility for Amazon. Amazon told KVUE in a statement in January that, "Amazon does not comment on speculation."

The site for Project Charm is highlighted below. In between the blue square and the neighborhood to the west is the land for the Timmerman 2020 Rezoning.

Land Strategies Inc., an architecture firm with an office in Austin, is behind the conceptual and potential design of the development, should it come to fruition.

"A transitional neighborhood that allows for live work and play," said Paul Linehan, the president of Land Strategies Inc. "You're going to have a major employer right next door. They're going to look for places to live. They're going to be able to want to walk to their restaurants or their stores."

The potential development could provide different types of housing units, parkland and potentially shops and restaurants.

Credit: Land Strategies Inc
One of the conceptual designs for the proposed development for the Timmerman 2020 Rezoning

Linehan said there are buffers from the neighborhood and that this kind of development could benefit everyone.

Credit: Land Strategies Inc
One of the conceptual designs for the proposed development for the Timmerman 2020 Rezoning

"As they move there and move into that area, [they] are going to be looking for new retail centers, a new mixed-use type of development and office space and restaurants and parks, and that's all going to be built into this. And we have to meet the city requirements," said Linehan. "We’re just trying to make it as best we can, make it a beautiful place of future for the people to live in."

"He knows that we've got to address the neighborhood concerns and the buffers and the trees and the walkability and the parks and the different land uses that they want," said Linehan.

Credit: Land Strategies Inc
One of the conceptual designs for the proposed development for the Timmerman 2020 Rezoning.

Project Charm was met with great opposition when it was first brought up. KVUE spoke to some neighbors who were not happy about the rezoning.

The same push for rejecting the rezoning happened at Pflugerville's Planning and Zoning Commission meeting on March 2.

You can watch the entire meeting on the city's website. Fast forward to around one hour in to see the presentation for Timmerman 2020 Rezoning and the public comment.

The vice president of the Bohl's Neighborhood Association, Jon Oelrich, told KVUE on Thursday a lack of communication from the City is one of the many concerns he and other neighbors have.

"If we could have been involved in the process of planning this a little bit earlier, had a little time to work with the owners, a little time to work with the city planning and zoning, it's quite possible we may have been able to come up with something that doesn't cost a lot of money, is fairly quick to implement," said Oelrich. "We're concerned that without some kind of a firm plan in place, we don't know what's going to go in right across the fence from us. And it may be something that we really don't want to have, and that's really going to affect our our quality of life and property values."

"A suburban-type development living right next door to a shopping mall or a strip shopping center, the value of that property goes down," said Oelrich.

Traffic, noise, light, air pollution and potential water pollution are all concerns that Oelrich said he and some of his other neighbors have.

"We're not actually opposed to the classification, but we really want to know before it happens," said Oelrich. "So if we can work together with LSI and the Timmerman group and the City to try to come up with something that's more suitable for this this area, I think we'll we'll be able to come to a good agreement. Until then until then, I think we're not going to be happy."

A citizens petition and recieved email was publicly shared on the City of Pflugerville's website.

Linehan said there are some plans to talk about additional roadways to help handle traffic, among other things.

"Have faith in us. We're good people. We're trying to design for the future, and in the best way we can. And we're trying to use the exact flexible zoning category that allows for us to try to address their concerns," said Linehan.