Before the pandemic, local comics called Austin a one-comedy-club town. Now, they believe it could be the new Mecca for the industry. 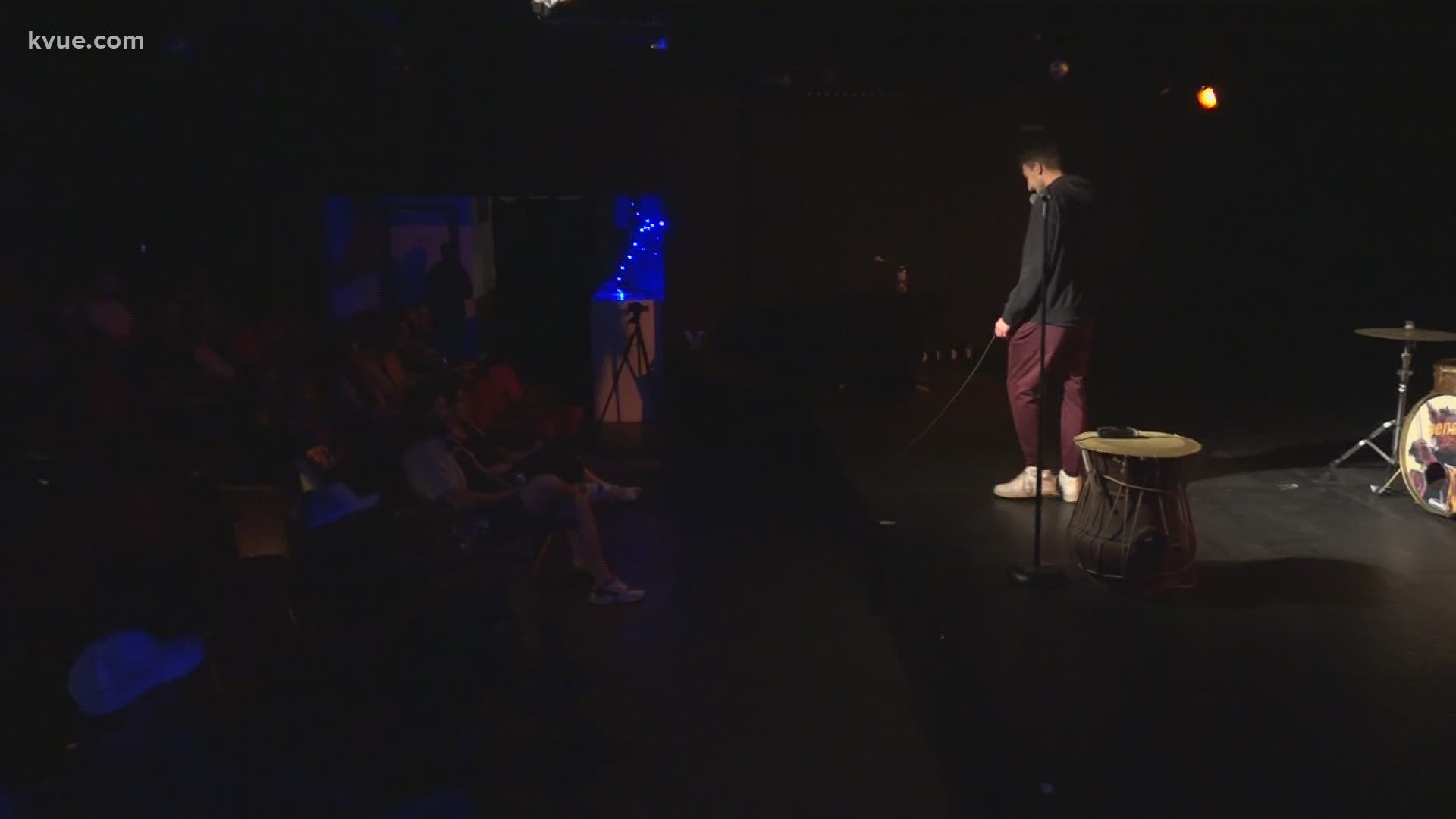 AUSTIN, Texas — Over the past year, people across Austin, Texas, the U.S., even the world, needed a laugh.

"We're seeing a lot of really talented comedians move here to pursue comedy because they just can't where they're from," Spencer Cavins, who's been doing standup for about two years, said.

"Prior to COVID, the Austin scene was well and healthy, but it was like its own little bubble," Dean Allen Stanfield, who's been doing standup for three years, said. "Everybody stayed where everybody was comfortable. With COVID, everyone is flooding in here. You have to earn your spots now."

Wednesday night, both Cavins and Stanfield worked the microphone at Santa Cruz Studio Theater in East Austin. The newly-minted event coordinator said he wanted to start bringing in more comedy shows because it's a booming arena.

RELATED: Cap City Comedy Club to reopen this fall at The Domain

"I'm aware of what's happening in the country, [stuff is] closed down, people ain't performing, especially comedians," Jacey David said. "That Zoom [stuff] is wack. I mean, you can't do comedy with a screen."

David, dressed in colorful Crocs, a sun hat, shorts and sleeveless flannel for the occasion, welcomes people personally to the show. Tickets are $10, everything else is a donation. About 50 people trickle into the seats before Cavins takes the stage first for his 10-12 minute set at 8 p.m.

"I think comedy is hotter now more than ever," Cavins said. "It was like that pre-COVID, but I think especially now people need to laugh, and Austin has cemented itself as the third city. There was always New York and [Los Angeles], now Austin is in serious contention to be the best comedy city in the U.S."

Stanfield even went so far to say that Austin is becoming the new Mecca for comedy.

Is Austin the next #comedy #boomtown? Some local comics I talked to tonight call it the next Mecca of comedy, and it's all thanks (in part) to the #coronavirus #pandemic and 2020. @KVUE pic.twitter.com/lYc6LfUeKa

"High tides raise all boats," Stanfield said. "We've just had a flush of new talent that makes us figure new stuff out. All these big names are moving here, new clubs opening up. Prior to this, we had Cap City. ... I get to get on stage eight, nine times a week now."

Others in the comedy scene say the same. Austin, while a boomtown for housing, live music, and a new sports team, is quickly becoming a comedy boomtown.

Brandon Lewin, who founded Big Laugh Comedy as an independent production company connecting venues with comedians, said the arrival of Joe Rogan coupled with the pandemic closing everything down, created a perfect storm for comedy growth.

Tonight he visited the Governor’s Mansion.

He may be a new resident but you can tell he fits right in.

"The comedy community, although there were some good comedians that came out of here, wasn't really that strong in the first place before the pandemic, and then when it hit, it just grew substantially," Lewin said.

Lewin added that as more comedians flock to Austin, there will be a lot of comics testing out new jokes.

"What we found is that because of the high level of comedians we were bringing to [Vulcan Gas Company], a lot of bars on Sixth Street and the surrounding area were starting to do more shows, bar shows and they weren't the same level. But at the same time, it's a lot more comedy," Lewin said.

By the end of the year, Lewin expects to see about half a dozen nearly exclusive comedy venues in and around Austin.