The city collects millions from developers that pay a "fee in lieu" of providing "affordable" housing. The money is supposed to help provide more units, but is it? 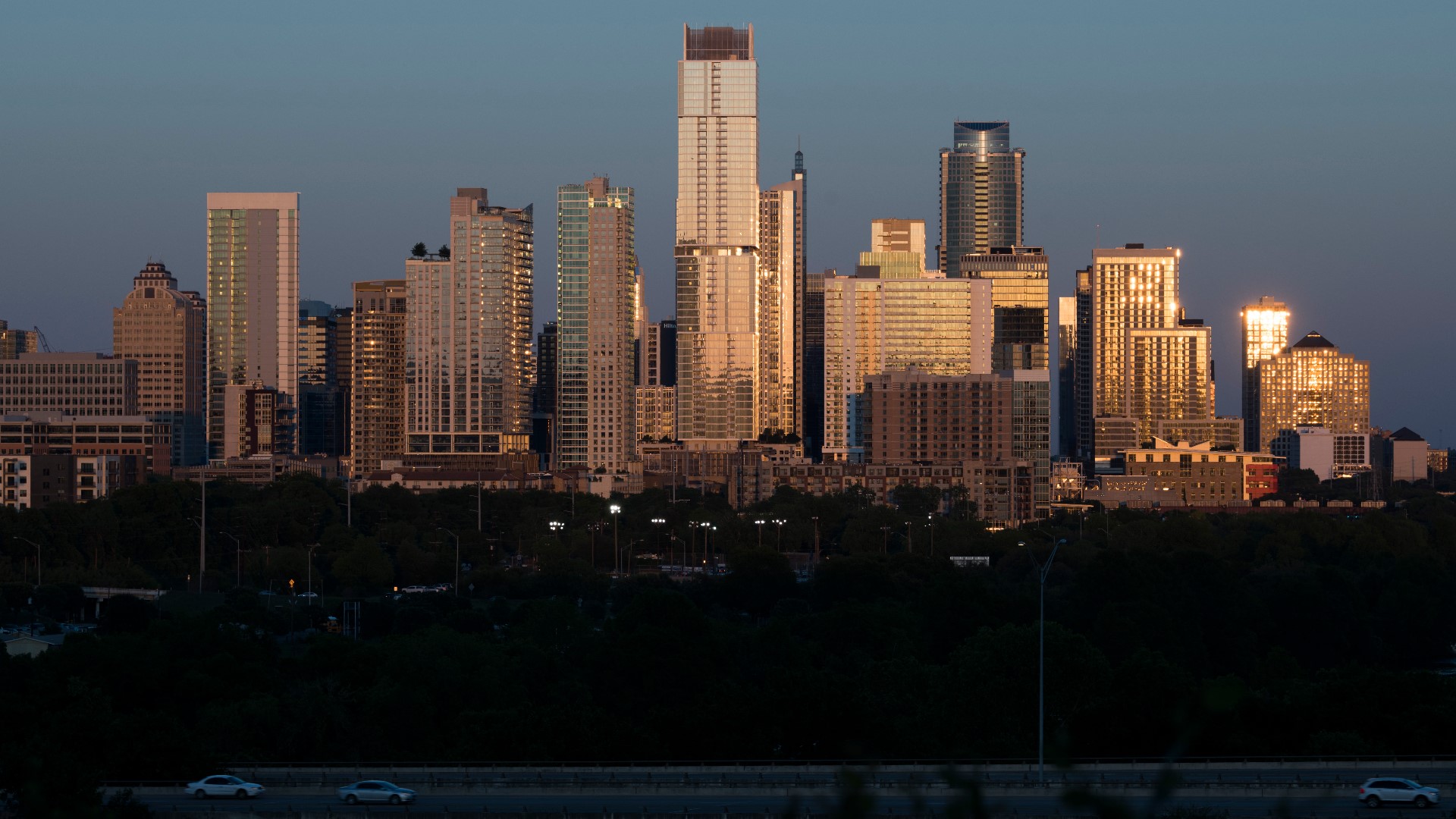 AUSTIN, Texas — Along with the many benefits of Austin’s booming economy, there are challenges. That includes affordability.

As the skyline has grown, so has the cost of living in this boomtown, leaving many long-time – and in some cases life-long – residents feeling shut out.

"To even find anything, even a one-bedroom is like a thousand dollars in the city limits," said former Austin resident Elijah Zuniga.

The dream of a comfortable life led Zuniga and his wife 50 miles northeast of Austin to Thorndale. They now have an hour-long commute from the tiny Williamson County suburb.

Zuniga is an electrician and his wife is a medical technician. Both earn decent middle-class salaries but are not where they expected to be at the age of 30.

“We're at the point where we'd like a house, but we can't even afford a house because housing is so expensive [in Austin]," Zuniga explained.

He and his wife are among a growing middle-class population that feels Austin is increasingly out of reach.

According to a city survey, 43% of residents surveyed said they were displaced because their rent was rising above what their household could afford. It’s a statistic that resonates with Zuniga and his wife.

"The cost of living here has gone up so much faster than the actual ability to pay for it," he said. “That's why the city government needs to provide incentives to create affordable housing."

Developer incentives in the City of Austin

The City of Austin does provide incentives for housing developers.

The KVUE Defenders discovered the developers of 54 projects have paid nearly $8.3 million in “fees in lieu” of affordable housing to the City in the last 15 years. Most of those developments have fewer than 15% affordable units. Seven of them provided no affordable housing units at all.

This interactive map shows where those 54 projects are across Austin and how much those developers paid in "fees in lieu" of affordable housing.

According to city records, the developer of a project in the Domain paid $581,536 to avoid providing affordable units.

Credit: Terri Gruca, KVUE
The lowest-priced condo at The Independent is selling for $529,000 and gets you less than 700 square feet of living space.

The developer of  The Independent paid the City $2,477,490 in fees not to provide affordable units. The lowest-priced condo there is selling for $529,000 and gets you less than 700 square feet of living space.

An Austin developer weighs in

Perry Lorenz is a real estate investor and developer who has been working in Austin for 42 years. His company helped build The Independent and other residential complexes in Austin. Lorenz told KVUE costs have increased too.

“Downtown land prices have doubled in three or four years, in some cases tripled. Usually, that takes generations,” he said.

Lorenz said that's one of the reasons developers choose to just pay the fee.

“If you're moving someone into a unit at $500 a square foot, it's a working-class family, it's a three-bedroom, they've got four kids. Do you want to put them in a million-and-a-half-dollar unit in a high rise downtown? Or do you want to go buy four or five times as many units in a neighborhood?” said Lorenz. “That's why I think most developers end up contributing to the trust fund rather than building it on site. It gets you more housing and it's just easier.”

Austin City Council: The developer fees are not enough

Austin City Council members agree the fees developers are paying are not enough and it’s a problem the city needs to address.

"We have created so many roadblocks in creating affordable housing,” said City Council Member Sabino “Pio” Renteria, who represents District 3 in East Austin.

Flannigan showed KVUE around the latest affordable housing development in his northwest Austin district. Lakeline Station cost about $30 million to build with funding from a partnership between the non-profit Foundation Communities along with private and local government interests. All 128 units at Lakeline Station are full and so is the waitlist.

"The need is much greater than what the City and the market are able to provide," Flannigan said.

Lorenz said an increase in the "fees in lieu" of affordable housing would only be passed on.

“It would just simply mean a higher fee would be attached to the development which means you raise your prices,” Lorenz said.

Affordable housing by the numbers 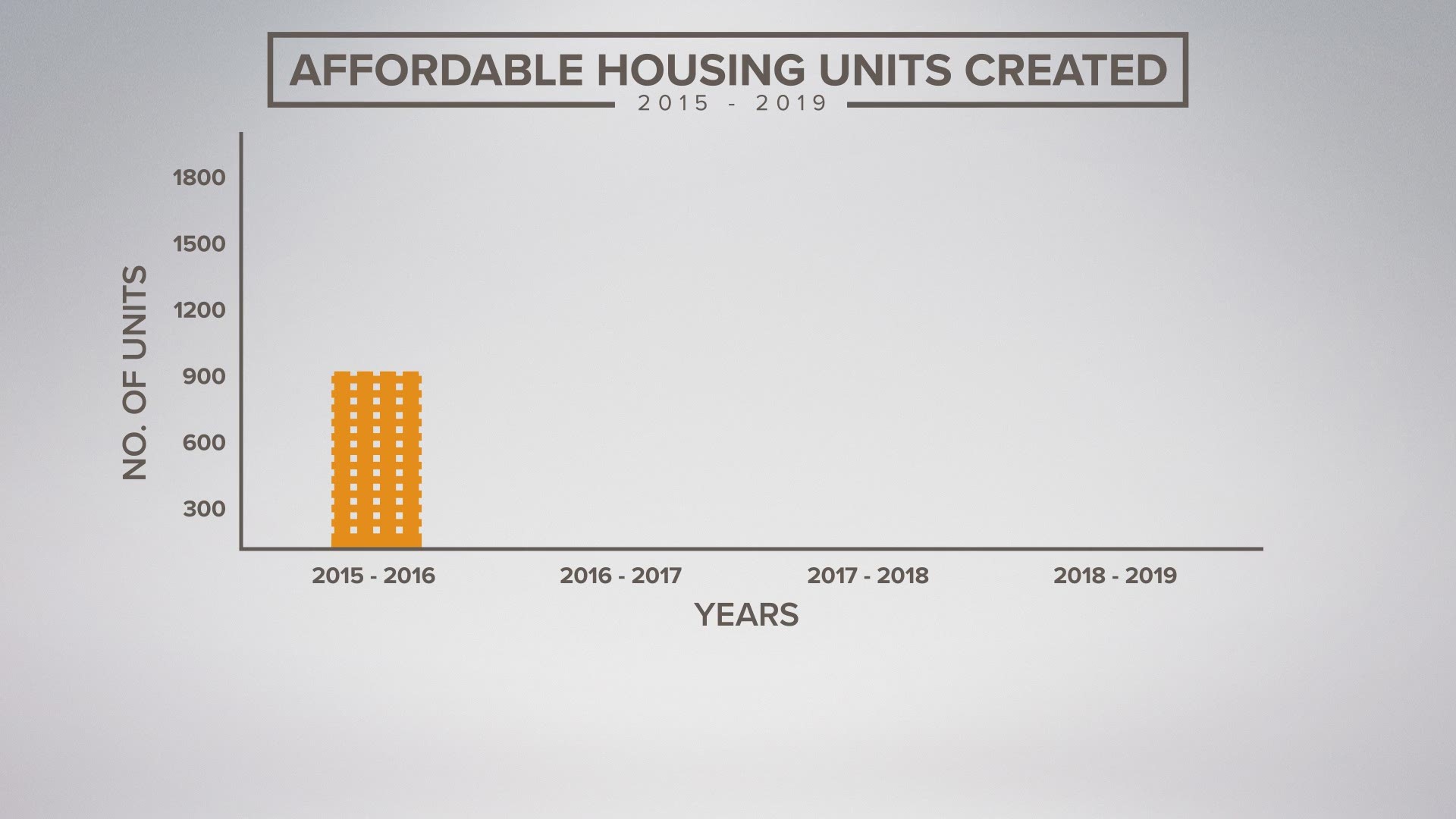 Right now, there are 23 major construction projects underway across Austin and another 16 are planned.

Since 1993, 25,439 affordable housing units have been created in Austin. Twenty-five percent of those were created in the last six years.

“The affordable housing we have on the ground today is more of a response to the smaller moves made five and 10 years ago,” Flannigan said. “Developments don't happen overnight. You don't pass a new land development code and immediately bulldozers are hitting the streets.”

“It's also not true that you pass a bond and that immediately turns into affordable housing. We have hundreds of millions of dollars – voter-approved – to build for affordable housing, and we are getting those dollars expended,” Flannigan said. “We will see a lot more affordable housing hit the streets in the next two, three, four and five years.”

'Boomtown 2040: Tomorrow's ATX' KVUE special shows what Austin will look like in 20 years

Several new affordable housing projects are in the approval and planning process now.

At the same time, 10 more developers are set to pay another $12 million in fees instead of providing affordable housing, which isn’t enough money to build another Lakeline Station. Another 11 developers have yet to have their fees calculated.

This interactive map shows pending developments that are paying "fees in lieu" of affordable housing across Austin.

In the next four years, Austin is set to lose another 5,000 income-restricted units that were funded or built with incentives for developers from the City. The “affordability period” for those units expires by 2024.

Being middle-class in Austin means having a longer commute

Meanwhile, a long commute is likely to be the norm for a growing number of average, middle-class families.

“I've got people from my company coming all the way from Seguin, Killeen,” said Zuniga. “One person who goes to my class works in Austin and lives in College Station.”

This is all that is mentioned in the latest land development code draft currently under consideration by the city council.

Section 23-4E-5040 mentions alternatives to providing affordable housing. This is the only mention of the “fee in-lieu” in the land development code draft.

This story brought up a host of other affordability questions and you can count on the KVUE Defenders to keep digging. If you have any questions email Terri Gruca or reach out to her on Facebook, Twitter or Instagram.

Water line break at The Independent causes water to pour down side of building, flood several floors