Gov. Greg Abbott on Friday announced that bars must re-close and restaurants will need to step back to 50% capacity or less. 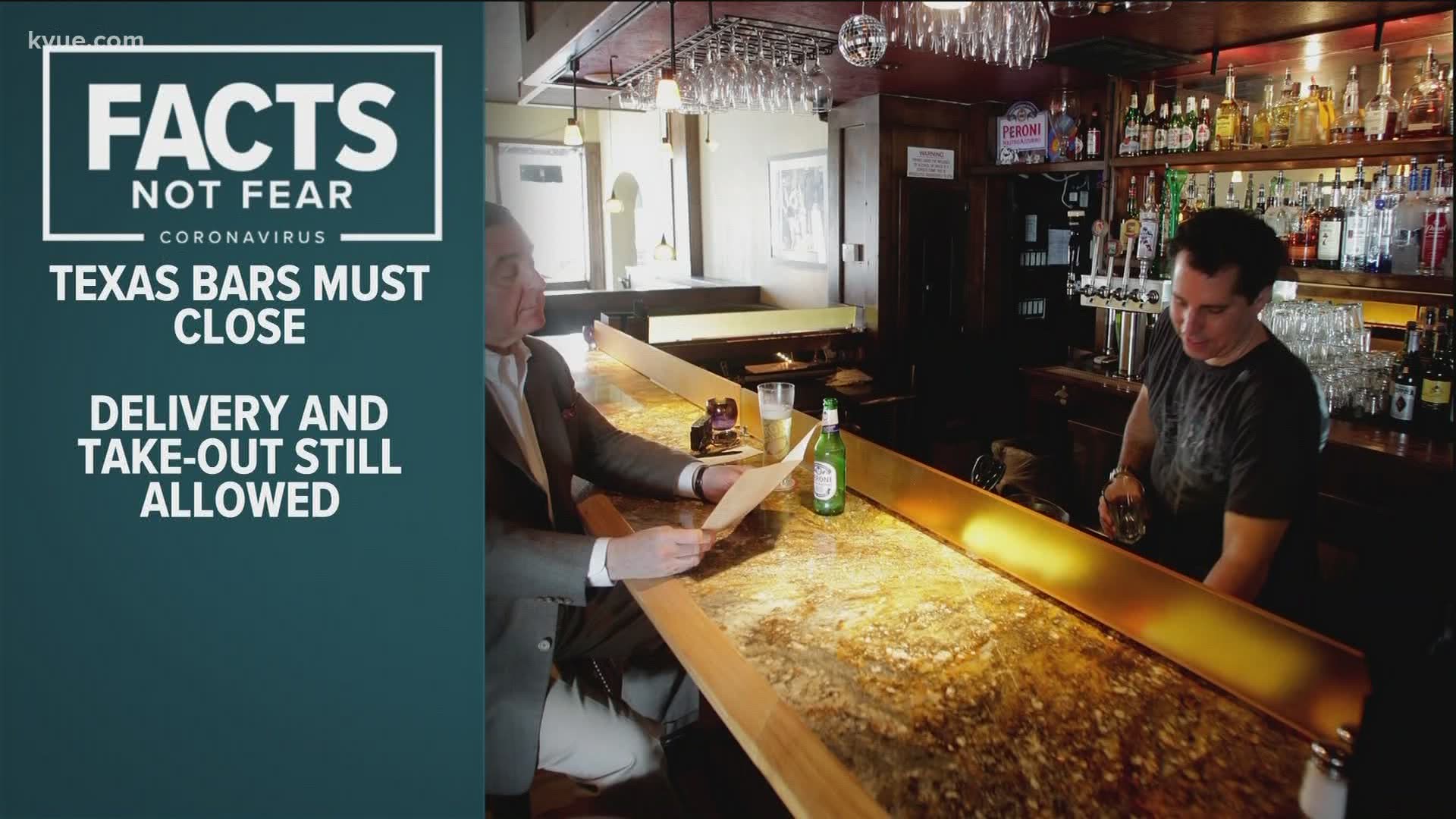 AUSTIN, Texas — As coronavirus cases continue to spike across the state, Gov. Greg Abbott announced on Friday that some Texas businesses will need to take a few steps back in the reopening process. Restaurants will need to cut back to 50% capacity or less and bars are being forced to re-close.

Just over a month ago, bar owners eagerly took down their boards but, by Friday, they were putting them back up to shut down for a second time during the pandemic.

"It's difficult when you are a business operator and you are given three hours to shut down, so that is a bit tough," said Speakeasy bar and live music venue owner Michael Girard.

The 23-year business owner said he respects Gov. Greg Abbott's newest executive order but he wishes they had more notice.

"Thousands of musicians across the state this morning woke up and found out they were out of a job," said Girard. "I canceled our live music calendar."

This comes on the heels of the state's COVID-19 positivity rate passing 10%, being the highest its been since April.

Girard said he took the right precautions and spent a couple of thousand dollars getting his employees tested for COVID-19 on Thursday.

"I watched my peers, there were a lot of people trying hard and really doing the right things," said Girard. "A handful of people caused all bars in the state to shut down."

The Texas Bar & Nightclub Alliance, a group of bars and nightclubs helping to protect members by providing a platform for political and legal information, is not thrilled.

The organization released a statement soon after Friday's news broke:

"Gov. Abbott's Executive Order effective noon today indefinitely reclosing 51% mixed beverage licenses is unjust and irresponsible. As of June 25, there are 2,296 confirmed deaths statewide in Texas attributed to COVID-19 out of a total population of 29,900,000. This represents a 0.00007% death rate. Once again, our businesses are targeted for complete closure allowing zero income for hundreds of thousands of Texans employed by our industry. Meanwhile, no other business sector in Texas has been subject to any enforcement of social distancing and are allowed to continue to operate. The governor’s decision is without any scientific evidence to suggest that 51% of licenses are more responsible than other businesses which cater to the public for the spread of infectious disease."

Thursday marked the state's third day in a row that record-high numbers of new cases were reported, just shy of 6,000. On Friday, the U.S. itself also reached its record high, with 40,000 new cases reported.

Since bars were allowed to reopen, the Texas Alcoholic Beverage Commission has been monitoring businesses across the state to make sure they are complying with coronavirus safety measures. Last weekend, the TABC visited nearly 600 businesses for inspections, which resulted in the permit suspensions for 17 alcohol retailers. Four of those were in Austin.