Indeed.com, one of the world's biggest job sites, opened its new location in North Austin on Friday. The company plans to add 1,000 jobs there in the next few years. 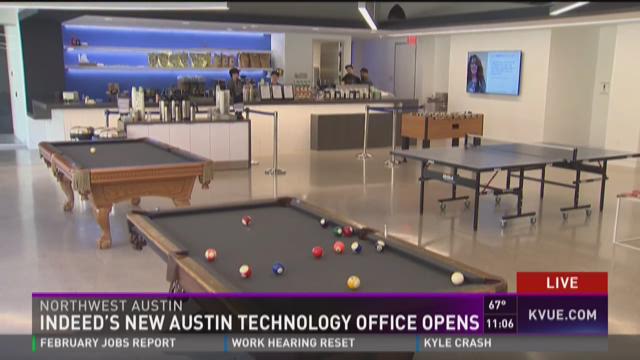 The City of Austin has continued to top many lists, including as one of the fastest growing cities in the country. The number of companies expanding in the city is also rising.

On Friday, one of the world's biggest job sites, Indeed opened its new location in North Austin, adding 1,000 new jobs with it. More than 400 people, including city leaders and company employees, attended the event.

Tony Budet, Chairman of the Austin Chamber of Commerce, introduced the event while Indeed President Chris Hyams and Austin Mayor Steve Adler gave brief speeches about the growth of both Indeed.com and the city of Austin.

Indeed.com is a job search engine website, where people can look up job postings and upload their resumes. The company currently employs about 500 people in its downtown Austin office and plans to add almost 1,000 new jobs within the next few years at the brand new location.

Hyams said the company hires many young college graduates, citing its partnership with the University of Texas in Austin, as one of the key elements to its success and expansion.

"From the time that we started, we've hired a lot of people directly out of school, and UT has been our number one source of hires for the last 11 years and Indeed really couldn't exist without UT,” he said.

Adler congratulated the company and its leaders, and he talked about the immense growth he’s seen in companies, based in Austin.

“There are a lot of similarities between this company and this city, both are innovative, both are young, both are hard driving. Both are growing,” Adler said.

In 2010, Indeed.com past Monster.com to become the job website in the U.S. with the most traffic, according to ComScore.

Hyams added his company’s data shows that more than 50 percent of Austin job searches are made by residents living outside of Texas, which means many people are looking or at least interesting in working and moving to Austin. He said it’s another great sign of Austin’s growth potential.