Commissioner Santana expects the city council to take the issue up in March or April.

AUSTIN, Texas — Fewer people carry cash now than ever before, and some Austin businesses don't accept it as a form of payment anymore. The Human Rights Commission wants to change that.

On Monday, at its first meeting of 2020, the commission met and voted unanimously to recommend that Austin's city council ban stores or restaurants from not accepting cash.

The commission cited a federal report that found 17% of African American households and 14% of Hispanic households don't have bank accounts. Reasons for that include not having an ID or high bank fees.

Commissioner Courtney Santana told KVUE the goal isn't to punish cashless businesses – it's to give them a reason to accept cash.

Cash vs. credit vs debit: Here’s when to use each payment method

"We think it would be great if maybe we can give incentives to stores that are cashless to accept cash so that when their customers come in, they are welcomed to provide whatever tender they need," Santana said.

A big reason some businesses have gone cashless is safety.

Tiff's Treats CEO Leon Chen said since his company stopped accepting cash entirely about two years ago, the number of robberies and burglaries against the company's delivery drivers and stores has gone down dramatically.

"Tiff and I knew, in making this decision, that it might not be popular for everybody. But we said it doesn't matter because we have a responsibility to our staff," he said.

The change didn't hurt the company much, Chen said, because fewer than 1% of its orders were paid in cash.

"If somebody truly wanted to order cookies, there's a convenience store on every corner. There's a grocery store. All of them sell Visa gift cards. Someone can go in with cash, purchase Visa gift cards and come buy cookies online and at our store," he said.

Santana said she and her peers spent a lot of time discussing safety at Monday's meeting.

Chen doesn't want to start accepting cash again. However, he's open to installing cash-to-card machines within his store, which is something the commissioners want the city council to consider.

"'That's just such a great win-win idea. I think council can spend way less time, money, legal fees doing something like that, rather than forcing businesses," he said.

Santana expects the city council to take the issue up in March or April. Businesses with fewer than five employees, like some food trucks, would not be impacted, according to the resolution passed Monday.

You can read the original resolution below: 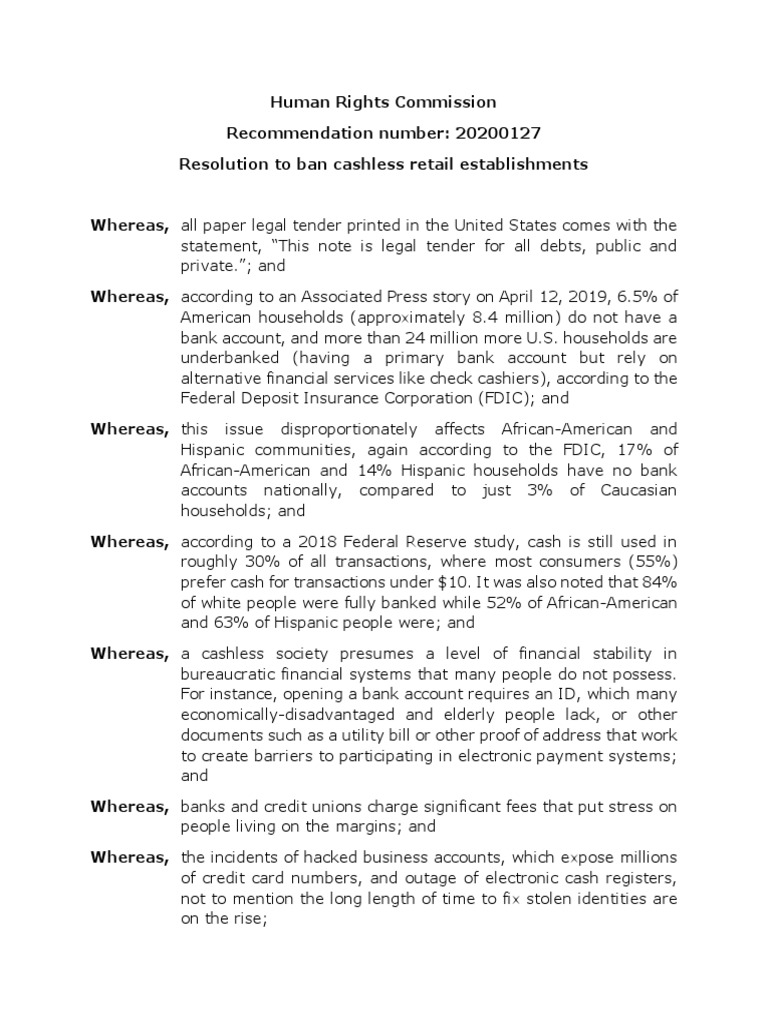 Cashless Store Ban Resolution
Discover everything Scribd has to offer, including books and audiobooks from major publishers.