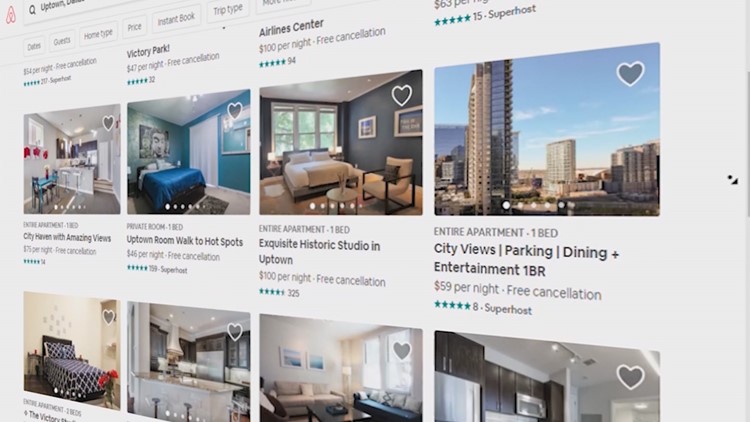 AUSTIN, Texas — Austin is losing out on millions of dollars from illegal home rentals.

According to a new report, a big majority of short-term rentals (STR) in Austin are unlicensed. The City hired a contractor, Host Compliance, who reported about 75% of the rentals are illegal.

In a memo from the Austin Code Department to the city council, Code Department Director Cora D. Wright wrote there are currently 2,500 licensed STR properties in Austin. Host Compliance reported there are more than 10,000 Austin properties that advertise as an STR unit.

Ruben Gaztambide has been renting out his home on Airbnb for about a year and a half.

"Overall, it's been a really positive experience,” Gaztambide said.

Positive, partially because he followed proper procedure and licensed his STR with the City of Austin.

Report: Cheaper to rent Airbnb over apartment in Austin

"I just wanted to make sure I was going through the proper channels and just trying to avoid fine,” he said.

As evidenced by the Host Compliance report, the majority of people don't do that.

In response, the Code Department said it's stepping up enforcement of violators, with the help of Host Compliance.

"They're going to send out a notice of violation to property owners who are not registered,” said Daniel Armstrong, code supervisor with the enforcement section of the Code Department. “They're either advertising their property or even licensed property that are advertising over-occupancy."

Armstrong said because there are so many illegal STRs, the City could be missing out on $3 to $4 million in registration fees.

“That does not include subsequent renewals,” he said.

In addition, it costs a lot of money to enforce STR violations. The City estimates it will cost $2.9 million this fiscal year.

"It comes at a cost,” Armstrong said. “There's always going to be expenditures and funds. If people do the right thing and come in and register, then that cost could actually be offset."

Gaztambide has been doing the right thing for years and said he wishes the City would streamline the process.

"They should try to develop some sort of system for everyday people to make it a little simpler,” Gaztambide said.

The Code Department said it will likely to go to the city council to talk about STRs when the council discusses the budget.