How much bang are schools getting for the taxpayers' bucks? That's the question behind TXSmartSchools.org, a website set up by former Texas Comptroller Susan Combs. 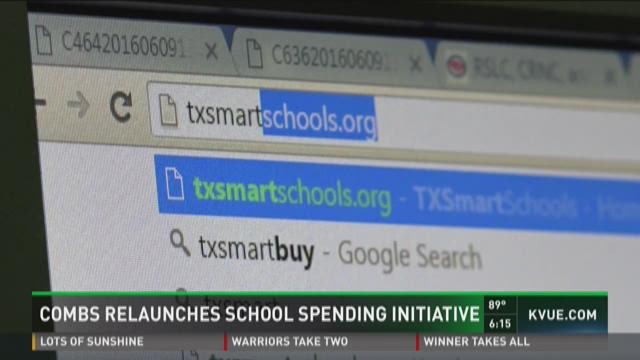 How much bang are schools getting for taxpayers' bucks? That's the question behind TXSmartSchools.org, a website set up by former Texas Comptroller Susan Combs.

Combs launched the Financial Allocation Study for Texas (FAST) program while comptroller in response to a 2009 bill passed by the Eighty-first Texas Legislature, but the program was discontinued under successor Glenn Hegar. After leaving office and the public eye for the past year, Combs has re-launched the site with the help of leftover campaign funds.

A search for Austin ISD shows the districts spends a "very high" $8,900 per student, with academic progress ranked "at or above 71 percent of all districts" -- for a score of 2.5 stars. Districts earning five star ratings include a slew of charters and a mix of tiny rural and large suburban districts, such as Cypress-Fairbanks and Fort Bend ISDs.

The data is collected by the Texas Education Agency (TEA) and analyzed by Texas A&M University education researcher Dr. Lori Taylor, whom Combs says did her best to make fair comparisons based on each district's challenges when developing the "Smart Score" methodology.

"So different labor costs. If your students move a lot in and out of the school, that's a higher resource cost for you to deal with. If you have a lot of kids who don't speak English as their native language, that's a higher cost," Combs explained. "You want to have apples to apples, and I think that they have done a bang-up job."

"I think this is important for parents and educators to find out how to do better," Combs added. "Business men and women -- what's the population going to look like? Realtors who would care about what housing prices are going to be. I think it's important for everybody."

"We've got over a thousand school districts in Texas, 254 counties, over 8,600 different campuses throughout the state. Every school is different," said Association of Texas Professional Educators lobbyist Josh Sanderson, who warns against relying too much on standardized test scores. Sanderson notes while districts have some discretion over local tax rates, funding is largely determined by a state formula the Texas Supreme Court recently said needs to be re-written.

Combs declined to comment on Hegar's performance as comptroller, and said she has no plans to appear on another ballot. As comptroller, Combs' office was a prolific publisher of interactive reports developed from data mined from state agencies. A private citizen once again, Combs hopes to add to the conversation about school finance, and told KVUE she'll be sending letters to members of the Texas Legislature to notify them of the project and its findings.

"I think this information will highlight some stellar schools are doing a very, very good jobs," said Combs. "Whether or not the legislators will take this, I'm hoping they will."