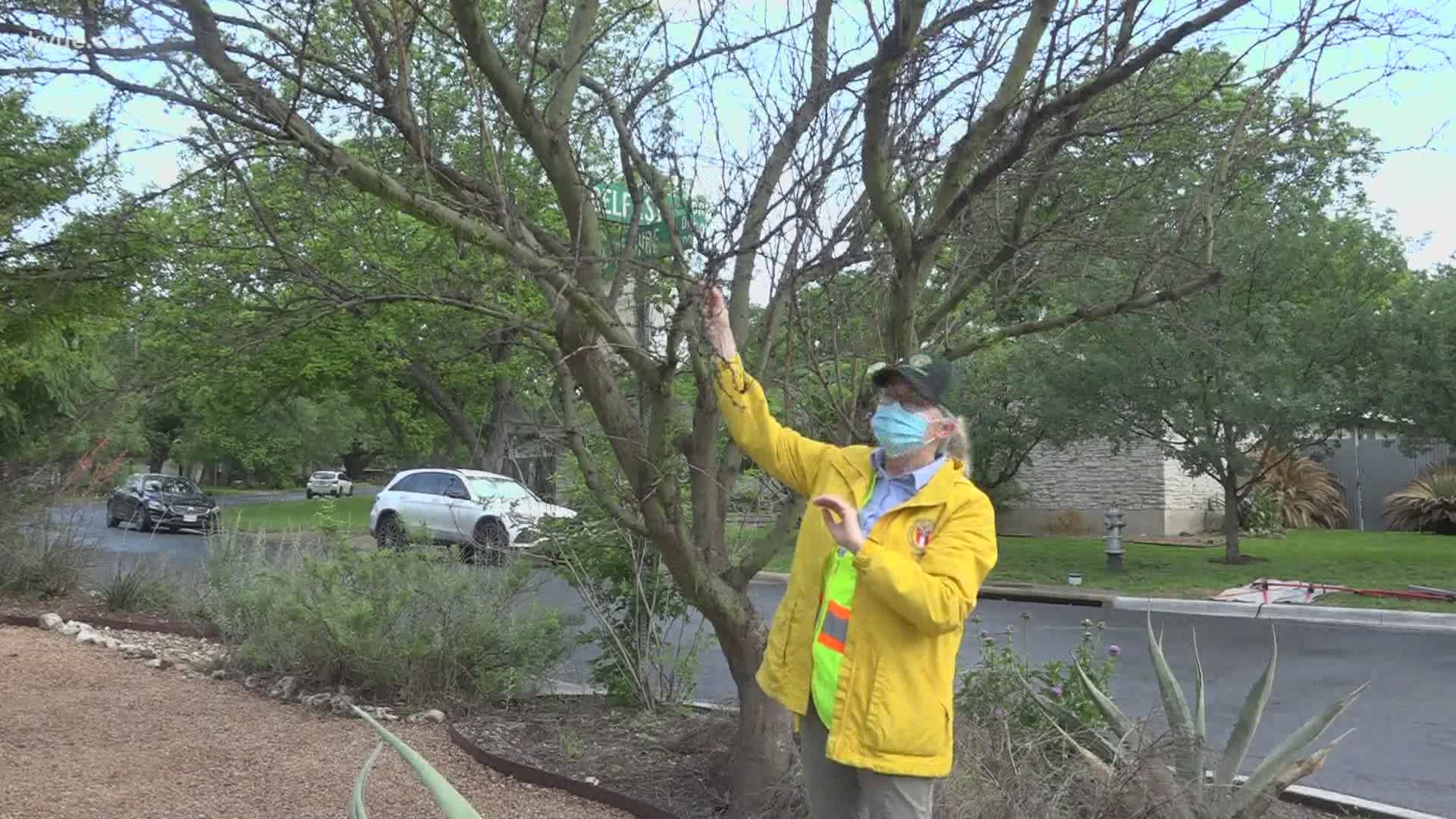 AUSTIN, Texas — By now, most Texas trees are supposed to be fully green. Across the state, many are still brown and are just starting to show new growth. Arborists and tree experts say the delay is from the stress brought on by the winter storms in February.

Combined with the recent hail and heading into low moisture months, trees that still have not leafed out could be dead in a matter of weeks, if they're not already.

"If it has green leaf now, it's not a guarantee that it's going to live, but if it doesn't have any green growth right now at this point, it's definitely something that we need to be concerned about," Ben Bertram, the head arborist for Treefolks, said.

Many trees have shown new growth closer to the trunk and on large branches. Bertram added only time will tell whether it's enough new growth to keep the tree alive.

"It is kind of a cost-benefit analysis to see – is it better to wait and try to nurse this new growth along or just remove the tree completely and then start from scratch?" Bertram said.

Dr. David Appel, one of the leading tree experts in Texas, agrees.

"A lot of cases it's just not going to happen too," Appel, a plant pathology professor at Texas A&M University, said. "It's going to take a lot of judgment this summer to decide what's going to be a useful shade tree and what needs to come down."

Before people start looking to cut down what may look like dead trees, Appel and Bertram want people to wait until June, maybe even July, before making that decision.

RELATED: Brown grass and dead plants: Here's what will come back and what won't after last week's freeze

"It's going to take a while for us to see exactly where on the crowns of the trees these buds are going to push out so that the arborists will be able to have an idea where they're going to be able to come in and immediately do remedial pruning on a tree to try to start rehabilitating these trees that have suffered damage," Appel said.

According to Appel, caterpillars, the hail storms to close out April, and the relatively dry climate ahead of the hail combined with the winter storms put extra stress on all types of trees.

Trees across Texas are showing a mix of green and brown after the #TexasWinterStorms. Some may survive, others won't. Arborists across the state are urging people to wait until June, maybe even July before deciding whether or not to cut them down. @KVUE pic.twitter.com/VpPBgIcVuo

"As these stresses build up on the trees, then we're going to see depleted, weakened trees that are going to start succumbing to other diseases as well," Appel said. "We're just getting reports from all over the state that there's a great deal of devastation."

Arborists and city leaders in Austin hope people wait to cut down any trees because if the tree ends up having enough growth but is cut down, it could take decades to replace it.

"I'm hoping that they fully leaf out and the canopies just aren't very sparse because the leaves are the food producers for those trees," Lisa Killander, a forestry project manager from the City's Public Works Department, said.

At the end of April, the City announced it anticipates as many as 90% of palm trees died. To kick off May, Killander said that was an overestimation. Now she has a new, admittedly optimistic, estimate.

According to Bertram and Appel, all types of trees were hit hard by the freeze. Only time will tell which are resilient enough to survive – even if their lifespans are now a bit shorter than they would've been.

"On the positive side, we may have seen a lot of invasive species are a little less tolerant of the cold," Bertram said. "This is creating an opportunity for another tree to come in that may not have been there in the first place."

To help the trees that may have survived but might not look it, Bertram recommends surrounding them with new mulch, compost and watering them as much as possible: 10 gallons of water for every inch in diameter of the trunk.