A total of 3,109 wreaths were sponsored for the Texas State Cemetery. 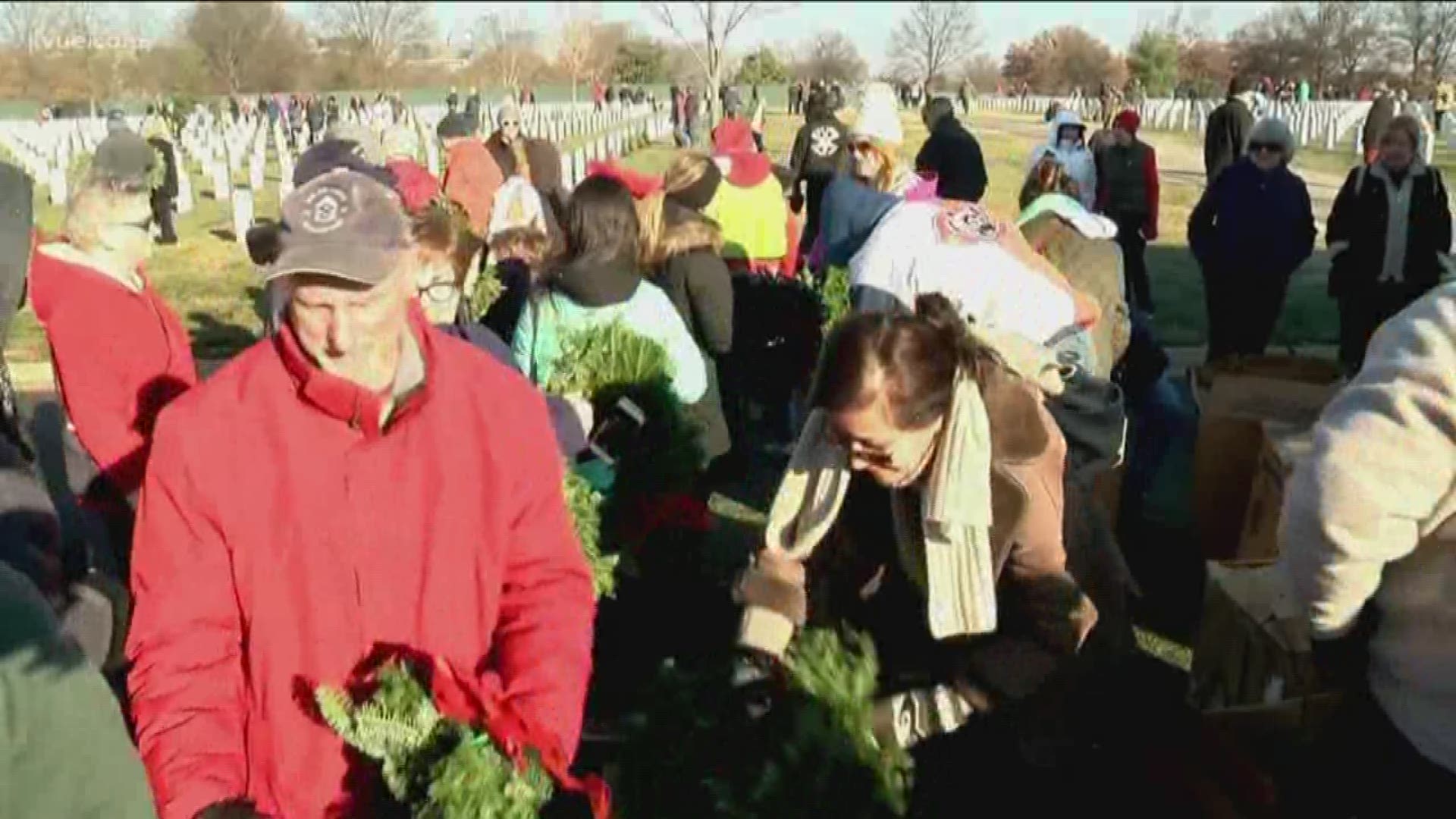 AUSTIN, Texas — Wreaths Across America has reached its goal.

The organization, which lays wreaths over the top of veterans' gravesites, only had 900 of the 3,100 wreaths it needed this year for the Texas State Cemetery. The last day for donations was on Dec. 2, and thanks to help from KVUE and its viewers, the organization said it reached its goal.

A total of 3,109 wreaths were sponsored.

One of the more famous veterans buried at the East Austin cemetery is Chris Kyle, the Navy SEALS sniper – someone Bradley Shotts considers a legend.

"He'll always be remembered for everything he did for our country," Shotts said.

Come Dec. 14, Shotts hopes to honor Kyle and the roughly 3,100 veterans in this cemetery with wreaths.

Shotts is a sponsor and the general manager of the Forest Ridge Funeral Home in the Dallas area.

"We are grossly behind where we need to be," Shotts had said.

That's because Wreaths Across America didn't have enough money.

"Times are hard. They're hard on everyone," Shotts said.

This is the first time since the program came to Austin in 2015 that it's having a hard time raising money.

It honors veterans like Austinite Richard Overton, who doesn't have a gravestone yet. When he died nearly a year ago, Overton was the oldest World War II veteran at 112 years old.

"We can't forget our veterans and what they did for us and that's what Wreaths Across America is all about, remembering our fallen heroes and honoring them," Shotts said.

But if the group doesn't get enough donations, it may have to skip entire sections like, the Confederate Field, simply because it is too large. That area holds some 1,500 gravesites.

Wreaths Across America Co-Chair Charlotte Chism Waldrum said it's a discussion she hopes they don't have.

"We don't have enough for that section, we may not be able to cover it," she said.

But with a deadline looming, she's hoping the community comes through.

At $15 a wreath, she thinks veterans are worth it.

"Each December on National Wreaths Across America Day, our mission to remember, honor and teach is carried out by coordinating wreath-laying ceremonies at Arlington National Cemetery, as well as at more than 1,600 additional locations in all 50 station states, at sea and abroad," the organization said.

What does it mean to sponsor a wreath? The organization said being a sponsor allows you to honor an American hero on Wreaths Across America Day at one of its locations, including Austin.

"We can’t do that without your support. Your sponsorship will ensure that a wreath is hand-crafted of all-American balsam and hand-tied with a red velvet bow here in Columbia Falls, Maine. It will then be sent to one of our participating locations, where a volunteer will place it on the marker of a fallen hero," the website says. "That volunteer will then, 'say their name' to ensure that the legacy of duty, service and sacrifice of that veteran is never forgotten."

You can sponsor a wreath by signing up online. Once there, you can choose which location you'd like to support.

The wreath ceremony will take place on Dec. 14 at the Texas State Cemetary.

This year will also be the first year Richard Overton's grave will be honored.

WATCH: Central Texas boy steps up to honor veterans as part of Wreaths Across America

Timeline: Weather to expect on days leading up to Thanksgiving