AUSTIN, Texas — It is one of Austin's longest-running traditions. The Four Seasons attracts families every year with its whimsical, sometimes very realistic and entirely edible gingerbread village.

This year's creation is a global show-stopper.

“It's by far our largest village yet,” said executive pastry chef Amanda Pallagi-Naim. She has been part of these creations for nine years.

“This year we are doing Austin and her sister cities,” she said. “There are 13 but we are focusing on five.”

Angers, France; Oita, Japan; Koblenz, Germany; Saltillo, Mexico; and Adelaide, Australia, are alongside Austin – each city with its own unique flavor.

“We put the most important things that each city has individually,” she said.

The research and crafting began four months ago and requires more than 100 hours to complete. No detail is too tiny and it's all edible. Crushed graham crackers make up the dirt.

“Keep the sticks then dip in chocolate, and I have Rice Krispies that I paint with pink color,” said Ana Keah, chef de partie. 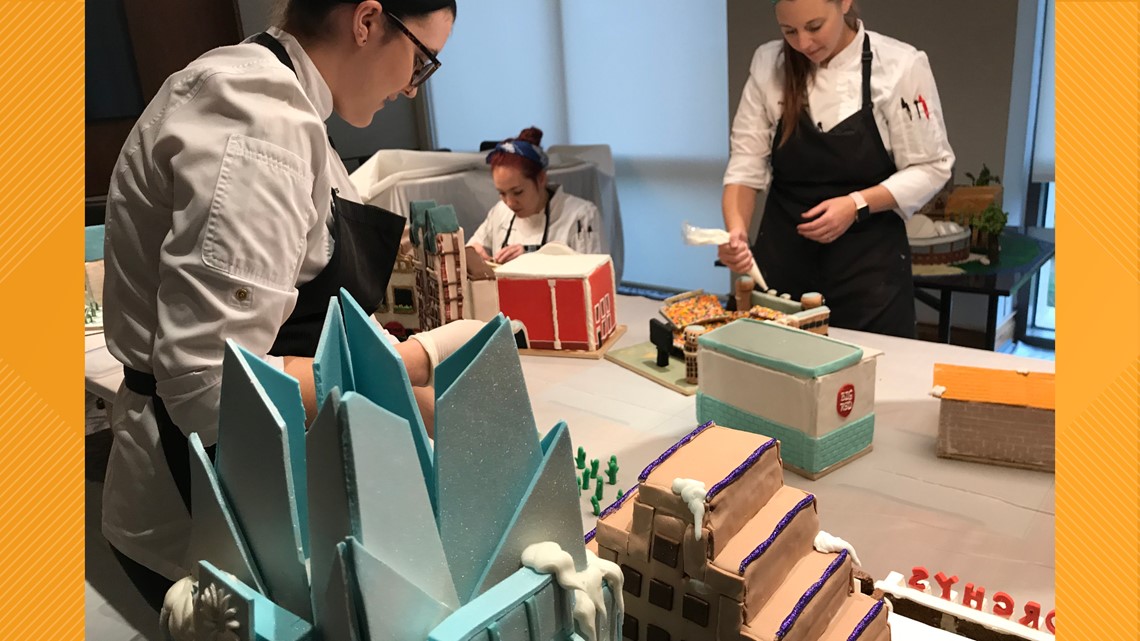 01 / 25
Every year the pastry chefs at the Four Seasons create an edible gingerbread village.
02 / 25
Nerds candies make up the fans inside DKR stadium and if you look closely you'll see Matthew McConaughey on the jumbo tron.
03 / 25
This is an edible picture of Matthew McConaughey the chefs placed on the jumbo tron inside the edible DKR stadium.
04 / 25
Part of this year's village includes places like Home Slice Pizza, Lucy's in disguise and Torchy's Tacos.
05 / 25
The pastry chefs spend 100 hours putting together all the structures. Engineers helped construct the acrylic domes which makes each city look like it's in a snow globe.
06 / 25
The Whole Foods downtown was made with wreaths on the side and an ice skating rink on top.
07 / 25
Ana Keah, chef de partie, puts the finishing touches on Oita, Japan, one of Austin's sister cities.
08 / 25
09 / 25
From the paint on the buildings, to the rocks and dirt, even the cherry trees are edible. The cherry trees are made of Rice Krispies and grape sticks dipped in chocolate.
10 / 25
Chefs used 150 pounds of gingerbread to make this year's village.
11 / 25
This is one of the murals in the Japanese village.
12 / 25
The pastry chefs add powered sugar snow to nearly every building they create.
13 / 25
If you look closely you'll see Santa on top of the brick building and shrimp on the barbie.
14 / 25
The sand is brown sugar and the shrimp on the barbie are all handmade.
15 / 25
Look closely and you'll see koalas in the trees.
16 / 25
All of the buildings include so much detail. The stain glass windows are made of sugar.
17 / 25
The train and the cherry trees are surrounding by buildings and a mountain.
18 / 25
You can't make an edible Austin village without some iconic Austin businesses.
19 / 25
The Australian village features kangaroos.
20 / 25
The color schemes and the signs all look authentic.
21 / 25
There's a crane in the downtown skyline, the Oasis and the capitol building -- all decked out for the holidays.
22 / 25
The snow globes were crafted by engineers at the Four Seasons and lights reflect off of them to look like snow falling. They protect the village but also block out the sweet smell.
23 / 25
The Four Seasons sells sponsorships for the village with all the proceeds benefiting a local charity.
24 / 25
Chefs made conchas to sit in the Plaza Saltillo Farmer's Market.
25 / 25
Every week Plaza Saltillo opens a farmers market with fresh vegetables and baked goods.

It takes 150 pounds of gingerbread and 100 pounds of powdered sugar to create this village, but perhaps the sweetest part is that it benefits a local charity, People's Community Clinic.

“It helps people in our community get healthcare that's needed and essential, and we've already raised $8,000 alone for them,” said Pallagi-Naim.

The finished creation makes its way into the lobby to be topped with handmade domes, designed to look like snow globes.

“It's a little scary putting the domes on top of the tall buildings – makes my heart beat a little faster,” she said.

From the art to the architecture, to the food and the creatures, the hope is this village takes you on a journey around the globe.

“You just learn so much from other places,” said Keah.

You'll walk away with a little slice of Austin and a bigger taste that when the world comes together we all benefit.

You can visit the gingerbread village between now and Christmas Day free inside the Four Seasons lobby.