Six months after Hurricane Harvey forced flood waters to destroy hundreds of homes in La Grange, volunteers are finished rebuilding the first home in the community. 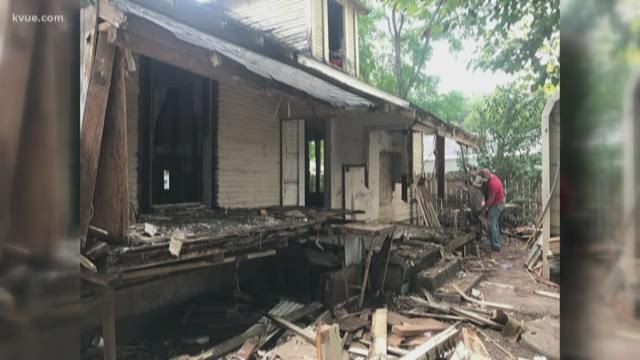 Six months after Hurricane Harvey forced flood waters to destroy hundreds of homes in La Grange, volunteers are finished rebuilding the first home in the community.

"I was ready to move in yesterday," said Kim Crider.

It's been months of working and waiting, and now Crider, and her family are ready to move home.

"It was hard for me to understand it all, it's the first time I've ever been in a situation like that before, and all the years we've lived here, we've never had to evacuate," said Crider.

She told KVUE they lived in the home for 20 years, but then the family was suddenly forced to evacuate.

"When it first happened, I cried," said Crider.

The Criders went to stay with family for what was originally thought to be a few days.

Instead, it's been almost six months.

"It was hard at first, because at first we didn't know where we were going to go," said Crider. "We survived though."

But, Billy Helm and his crew from Heirs of Grace church in Bastrop adopted the house.

"I wanted the hardest job he had," said Helm. "I wanted the job no one else would volunteer for, so when he brought be over, I was like yup, this is going to be a job. The house was completely full of water, okay, so we had to completely gut it."

For months, Helm and his team have torn down, patched up, and problem solved.

"This side of the house was five inches lower than that side, so the first thing we had to do was raise the house five inches," said Helm as he took KVUE on a tour of the home, and the work they had done.

Check this out- 6 months after Hurricane Harvey caused flood waters to destroy hundreds of homes in La Grange, crews finished the first rebuild! (And it looks cool!) 🏡 They’re just starting new build homes - it takes a long time to come back from a natural disaster @KVUE pic.twitter.com/12ra52vTAi

Now, the finished home is full of generous gifts.

"These are recycled pallets," said Helm.

People donated many of the items used to rebuild, and others came from old house.

For example, the kitchen cabinets are made out of the previous wood floors.

"It turned out beautiful, I couldn't be happier," said Helm. "It feels good, but that's what we're called to do, is to love our neighbors as we love ourselves."

Just down the road began the foundation on the first new home builds.

These will be two homes out of the hundreds needed for families starting over.

Members of the Long Term Recovery Team tell KVUE they hope to build 9 more next fall.

Around town, some people have moved back into their home that crews are rebuilding, even though it's not finished.

As for the Criders, they're thankful to be the first, to finally be back, and turn this newly finished house, into a home.

Volunteers have traveled from California, North Carolina, Indiana, and places all across Texas.

The Criders received the name and address of every single volunteer, and plans to send them each a thank you note.

If you want to volunteer, contact the city via email at VolunteerCityofLG@gmail.com.