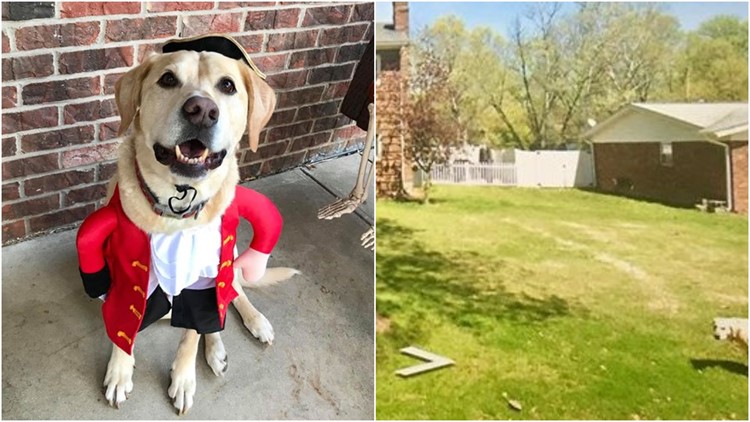 GODFREY, Ill. — When a Google Street View car drove by Jennifer Carter's house in the spring, right as her labrador Ike was doing his business in the front yard, she got a pretty big kick out of it.

"I was out there with him when I saw the Google car drive by!" Carter said. "I laughed and laughed, and thought, 'there’s no way they’ll use that picture!'"

What she didn't know then was that she only had a couple of months left with 11-year-old Ike, who she'd had since she adopted him at 6 months old.

In June, he was diagnosed with a quickly-progressing autoimmune disease. They tried steroids to slow the disease down, but it was too late.

"In a matter of the weekend, his health deteriorated so fast, and we lost him," she said. "He was the sweetest, best family dog and is missed so much by our family and friends!"

Fast forward to Friday, when Carter's husband went on Google Street View ⁠— and there was Ike, forever immortalized as he pooped in the front yard.

"We laughed all over again just as hard as the first time," Carter said.

She said it was maybe a little emotional to see Ike again, but more than anything, it was just funny.

"I had to share and hope someone else can laugh as hard as we did (and still are)!"

Ike may be gone, but he certainly left his mark on the world ⁠— in more ways than one.

Carter said the family is adopting another rescue dog next week, a 3-month-old Rotweiller/German Shepherd mix they're naming Harley Kate.