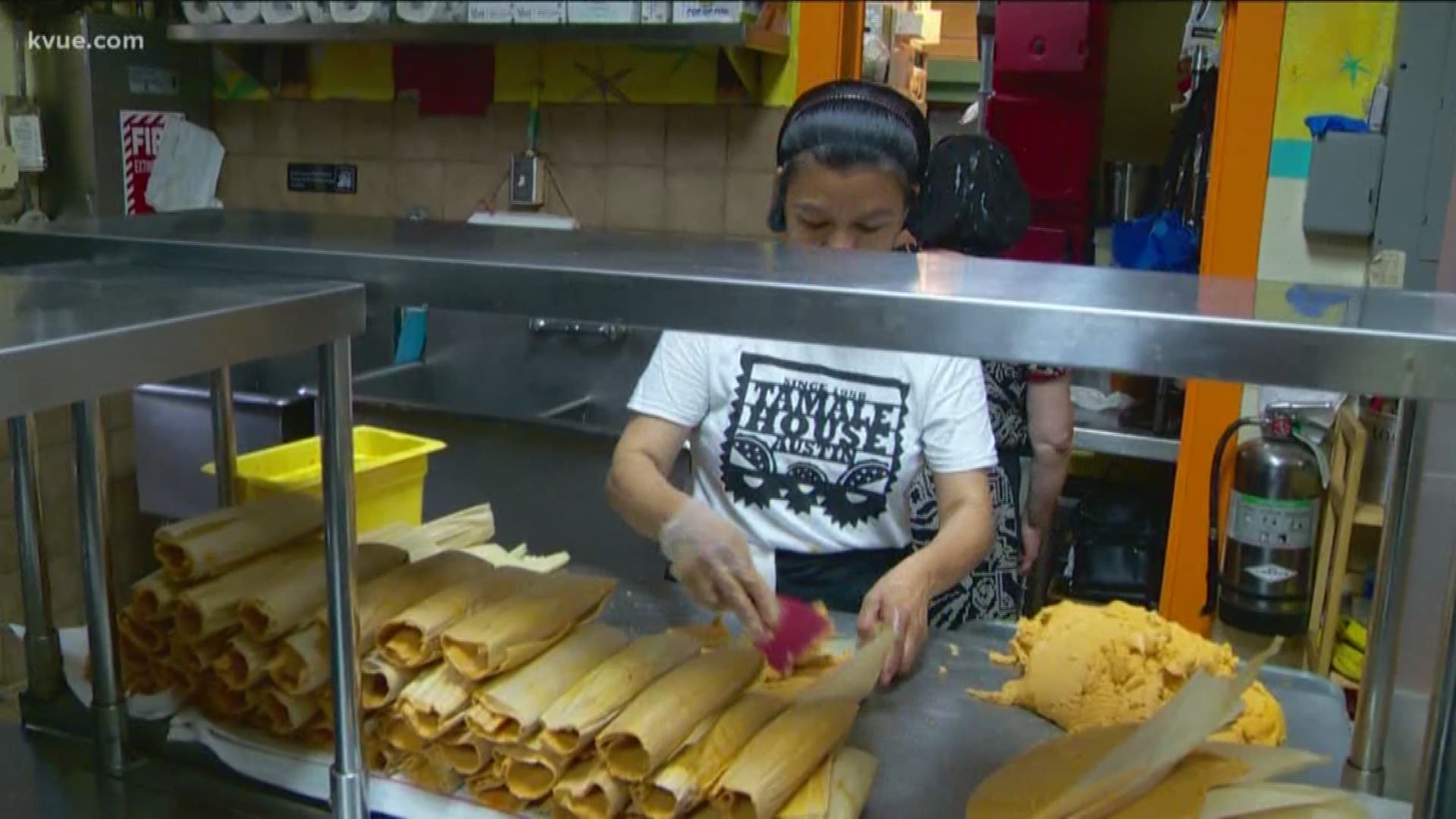 AUSTIN, Texas — There is nothing more comforting than biting into a nice warm tamale.  While these wrapped up bundles of goodness are sometimes looked upon as a holiday meal, the ones sold at Tamale House East have become an everyday affair.

At Tamale House East, you'll never walk around with an empty stomach even if you are there for work. Like any good mother, Diane Vasquez Valera wanted to make sure my photographer and I are well fed.

"Come sit down, let me get you some forks," said Valera.

Judging by the size of her tamales, we are in the right place.

"Usually one of these will do it unless it's a big guy," Valera added.

There's maza for the masses in this kitchen off East Sixth Street. On average, they sell 200 dozen tamales a week. Each type of tamale is made with a different type of corn dough or filling.

"We've got our pork here, chicken and the bean back here. We've got sauces like tomatillo, ranchero, chili con carne and we also have a mole sauce," said Valera.

You also have to try their Migas!

"Migas are wonderful. If not our first, it's our second best seller. You can mix some bacon in it, or you can put some sausage or some chorizo Mexicano," said Valera.

The menu is classic but evolving unlike the eight items at the original Tamale House Diane's family opened on First and Congress in 1958. Since then, the restaurant has branched out across Austin.

"There were one, two, three, four, five and we're the sixth one and this is the last one. A lot of things have been added on to the menu. They are recipes that my children have learned from all their travels," added Valera.

Both locals and tourists understand – there's no skimping out on portions. The fish tacos come with a full filet.

"A lot of people that come here, we are either the first stop off the airport or the last stop before they leave Austin. They just love it that much," said Valera.

Tamale House East has a nice patio and wrap-around bar. Inside, you feel like you're at your Abuelita's house. It's so cozy.

"Speaking of comfort, that chair, I love it! Well, since I spend a lot of time here, I wanted a nice little sofa so I can maybe fall asleep," Valera joked.

This is Diane's home. And no matter how much construction she sees in her neighborhood, the Vasquez Valera family is keeping the Tamale House legacy alive on the east side.

The restaurant has live music two nights a week. On Thursdays, it's salsa and there's plenty of dancing and on Saturday's when they've got a house band.