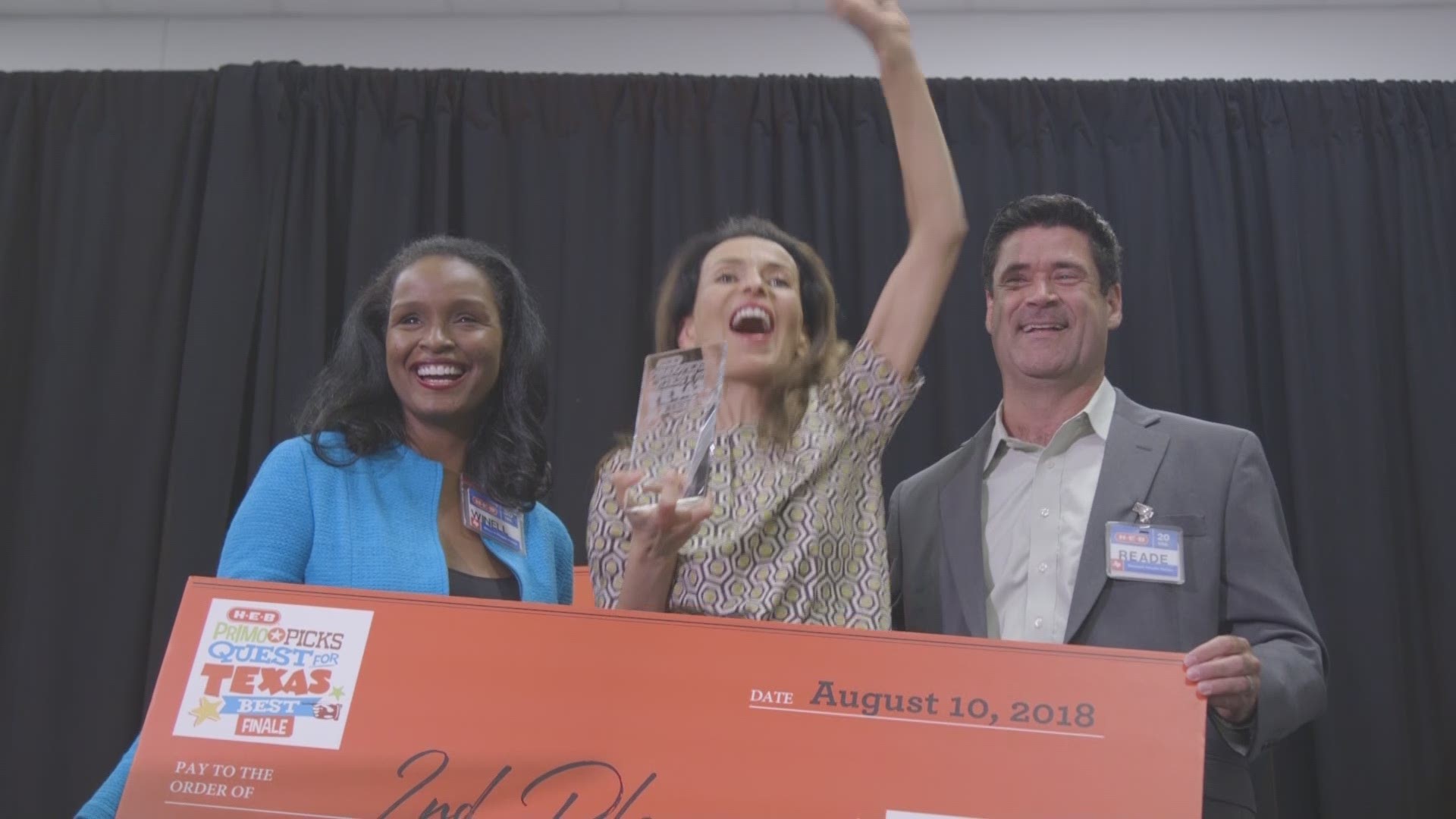 AUSTIN — An Austin-area foodie took home the grand prize in H-E-B's Quest For Texas Best competition: $25,000, a featured placement as a Texas Best Primo Pick, and keys to a brand new Toyota Tundra.

Four winners were selected by a panel of judges, each exhibiting the best Texas-made food product.

Kristen and Cody Fields from Austin, the folks behind frozen handheld empanadas, "Mmmpanadas," were the grand prize winners.

Reynold Darthard from Chef Rey Inc. in Sugar Land, Texas won the first place prize of $20,000 with his delicious cheesecakes.

Lucienne Duforets and Veronica Amaya from Bellefontaine in Houston, Texas won the second place prize of $15,000. Bellefontaine's won the judges over with its French-style ice cream.

And Austinite Tiffani Diorio won the $10,000 third place prize with her Pennymade biscuits.

Twenty-five Texas food finalists competed for the coveted spot on the shelves of H-E-Bs across the state -- and $70,000 total in prize money.

Several of those finalists were from the Austin area.

“Over the past five years of this competition, we have tasted more than 2,700 of the most creative Texas-based food and beverages in pursuit of Texas’ very best, selecting 125 finalists since 2014,” said James Harris, Director, Diversity & Inclusion and Supplier Diversity, H-E-B. “Each year keeps us on our toes with innovative products, and this year is no exception. We are proud to continue a program that gives small business owners the opportunity to share their pride and joy with H-E-B shoppers across the state.”

Since 2014, the Quest for Texas Best competition has yielded more than 432 new products for H-E-Bs across the state.

The 2018 Quest for Texas Best finalists, which beat out more than 700 entrepreneurs from nearly 140 Texas towns, were:

H-E-B provided the following descriptions of our fellow Central Texans that competed:

For three generations, 38 Pecans has grown several varieties of pecan trees along the Guadalupe River in Seguin, Texas. In their orchards and groves, Mark Walls and his family manage more than 5,000 trees, which produce award-winning pecans. Founded in 1958, the family-run business produces a bevy of delicious snacks made with their very own pecans. Among their offerings, they created an original lineup of flavored pecan meal, which is gluten free, paleo friendly and uses non-GMO ingredients. The consistency of flour, the pecan meal is mixed with spices to create sweet and savory blends that can be used as a breading or for pie crusts. With six varieties, flavors include Jalapeno, Hatch Chili, Cajun, Cinnamon, Cocoa and Honey.

When the Syrian War broke out, Farrah Sibai’s in-laws came to live with her in Texas. While it was sad her home country became a warzone, she was looking forward to a taste of home. Equipped with her recipe book, her mother-in-law prepared Mediterranean meals full of warmth, flavor and love. Wanting to share those unique flavors, she launched Afia Foods, a family-owned business that specializes in Mediterranean cuisine based on authentic recipes passed down from generation to generation. Packaged frozen, their all-natural, preservative-free products include Kibbeh, a fried croquette filled with minced beef, and Falafel, deep-fried patty made from chickpeas, onions, garlic and parsley.

For Catherine Stiles, the inspiration for Barbecue Wife came from the flavors and smells of her husband’s Austin-based barbecue joint, Stiles Switch BBQ & Brew, which made Texas Monthly’s Top 50 BBQ Joints. Much like the slow, careful craft of smoking barbecue, her “junk free” craft cocktail mixes combine a blend of hand-smoked ingredients such as sea salt, coarse black pepper and local Texas honey. Her first mixer was the Bloody Mary Mix, which is gluten free, vegetarian friendly and doesn’t contain MSG or high fructose corn syrup. The newest addition to the small-batch lineup is the Texas Smoked Honey Margarita Mix, a simple mix that uses fresh-squeezed limes, Texas spring water and local honey smoked for 72 hours. For every bottle sold, a portion of profits benefit local charities.

After losing her five-year-old daughter, Libbie, to cancer, Becky Nichols vowed to keep her memory alive by helping families whose children battle the dreadful disease. In 2006, she started the Loving Libbie Memorial Foundation, and through its Comfort Through Food program she’s able to provide food to children in cancer treatment, which is when many patients lack an appetite. To provide adequate nutrition and something easy to eat, Nichols came up with Libbie's FAMOUS Green Chile Mac and Cheese, a wholesome dish that she donates to hospitals across Central Texas. Seen as a magic wand for sick children, the creamy mac and cheese is made with all-natural ingredients. The non-profit wants to offer the cheesy delight in a retail setting to grow the program and serve more hospitals across Texas.

For the folks behind Mmmpanadas, the quest for the perfect empanada started in Costa Rica, when co-founder Cody Fields became obsessed with the hand-held delight. This passion continued, taking him throughout Central and South America. In 2008, he and his wife, Kristen, opened their food truck in Austin, crafting flavorful empanadas such as Argentinian Beef, Hatch Green Chile Chicken, Vegan Black Bean and BBQ Brisket. Today, they make more than 20 flavors of their artisan empanadas, which are free from additives, fillers, preservatives and trans fats. Available in two sizes, their pockets of love are cooked fresh from their food truck and can be found in the frozen section at some retailers in Austin.

Sometimes your harshest critics are those closest to you. For Tiffani Diorio, that tough pundit was her daughter, Penny. With a desire to raise her daughter with healthy treats, she began tweaking recipes to ensure every bite of food was tasty and nutritious while also appealing to a more sophisticated palate that appreciates homemade southern comfort food. Using a family recipe, this southern momma came up with a lineup of flavorful and flakey buttery biscuits, which are frozen, ready-to-bake and can go from freezer to table in 15 minutes. Pennymade biscuits are made from scratch with non-GMO, all-natural ingredients and available in multiple flavors, including Original, Hatch Chile Cheddar and Maple Bacon.

For Kristen and Robert Strong, it was love at first bite, having met on a food truck in Austin. Right out of culinary school the couple opened a food truck, which they operated before launching Pretty Thai, a unique line of Thai-inspired specialty sauces and spices. As trained chefs, they use their creativity to develop simple, authentic, restaurant-quality sauces and spices to be used by both novice cooks and professional chefs. Their products are free of all preservatives, fillers, stabilizers and artificial colorings, with most having five ingredients or less. Made by chefs not by a lab, their lineup of five sauces includes Sweet Chili, Peanut and Pat Thai, as well as three spice blends: Green Curry Powder, Thai Chili Powder and Seasoning Salt.

A story of faith and community, Sing & Shout Foods started to raise funds for a Central Texas church. Pastor John Williamson and his wife, Treva, were looking for ways to grow their church and expand their community outreach efforts. To become more self-sufficient, they took family recipes for their restaurant-quality Queso Enchilada Sauce and all-natural Salsa, which they served when they cooked dinner plates for fundraisers. As popularity grew, they moved operations to a commercial kitchen to keep up with demand, packaging their products in larger amounts. These Tex-Mex favorites are made with all-natural ingredients and don’t contain artificial colors or preservatives. A non-profit organization, Sing & Shout Foods directs all profits to benefit community efforts.

Austin-based Tiny House Coffee Roasters has pursued making incredible coffee at a great value while supporting a social mission since 2014. Co-founders Blake and Helen Schafer partner with small-scale coffee growers to create work and benefits such as paying farmers up to double the fair-trade value for their product. The two coffee aficionados launched their business after working with coffee producers during a stint as Peace Corps volunteers in Nicaragua. Their product lineup includes whole-bean coffee sourced from around the world, and their innovative Casita Cold Brew Pouches, ready-to-drink cold brew and cold brew concentrate in pouches equipped with tap valve.