Austin photographer continues work after being struck by car

An Austin-based photographer lost part of his right leg after being struck by a car during a photo shoot. Before being hit, he pushed the girl he was shooting out of the way. Now, he's back to work - and opening up about his experience. 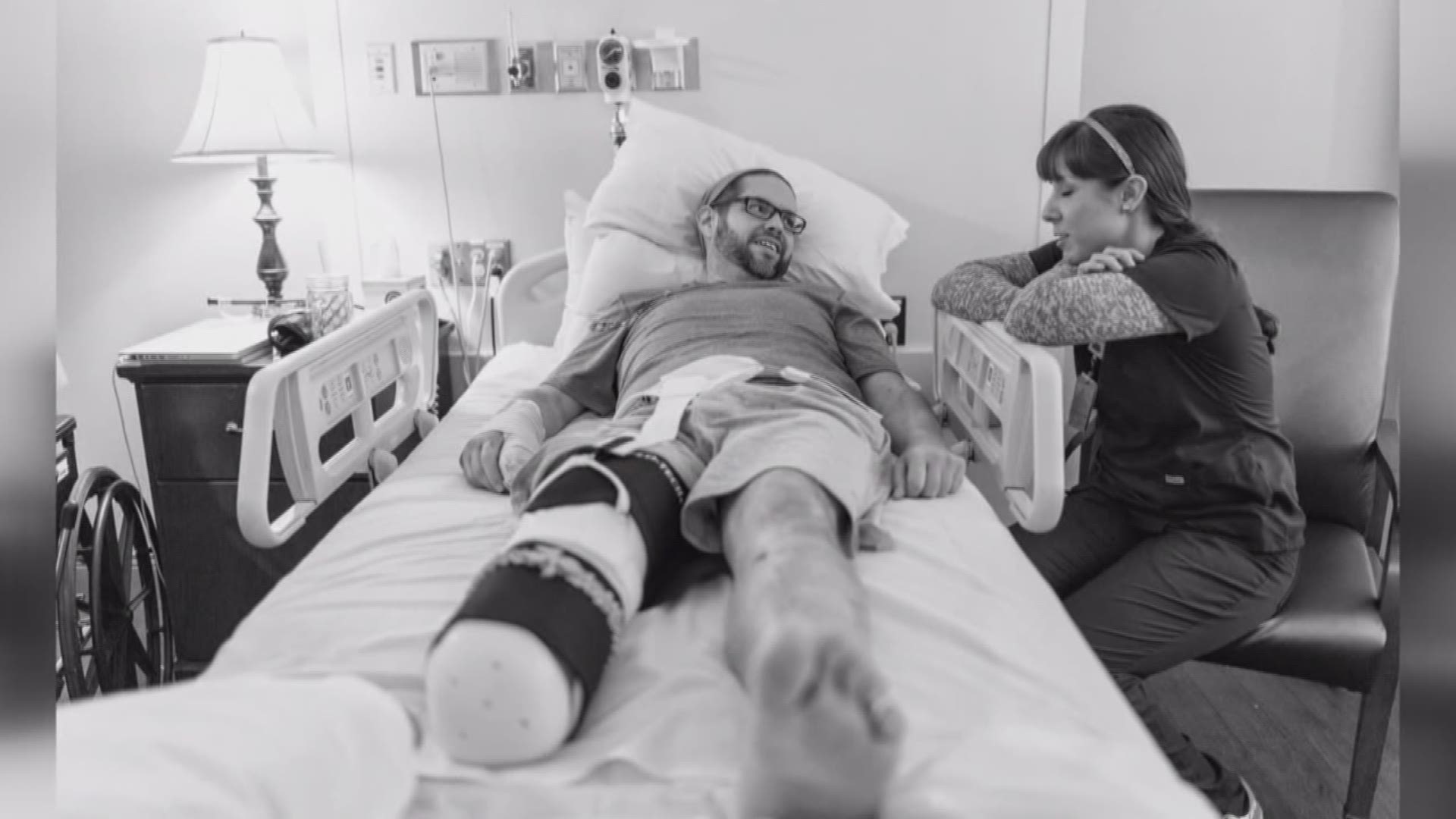 Carlos Salazar typically spends his days behind the lens of a camera. Whether it's shooting weddings or senior portraits, photography is a passion more than a job, but it's also a key connection between his past life and his current situation.

"I sometimes think 'Why did this happen?'" Salazar asked himself rhetorically.

In March 2014, Salazar was shooting a portrait of a high school senior named Kennedy, who had won a contest for a free senior portrait. Salazar was with Kennedy and her family along South 1st and Annie Streets in Austin, taking photos at a variety of colorful locations.

As they were about to walk to a different location, Salazar was struck by a car.

"I remember when the car was heading right towards us... and I turned around and saw it right in front of me. I did feel like time had stopped," Salazar said.

With that feeling, he played his options in his head.

"And then all I remember thinking is 'If I jump, maybe I can clear the hood, go around, and land at the very end. Like in the movies.' That was exactly what my mindset was. And what's so funny is it seemed like it was a long period of thought. And then I just jumped," said Salazar.

Before being struck, he pushed Kennedy out of the way from the oncoming car.

"I wish I could say it was more of a conscious effort. But it really wasn't. I just remember seeing the car coming towards us, and just jumping towards her, and pushing her, and turning around and it's right in front of me," said Salazar.

An Austin police report obtained by KVUE stated the driver of the vehicle had a medical issue and passed out before crashing into Salazar, as well as another vehicle.

The impact of the crash broke his wrist and thumb, and crushed his leg. The injuries were so severe, that doctors were forced to amputate it, from the mid-shin down. He said he was only in the hospital for about an hour when doctors told him they'd have to amputate.

"If I would have had more time to think about it, it probably wouldn't have been as good," said Salazar.

He recounted his thoughts and feelings the first time he saw his leg after surgery.

"The first time I saw it, it was kind of disbelief. It was super devastating because I didn't know how I was going to go on. This doesn't happen to a lot of people. So I don't know anybody that's an amputee," he said.

Despite the strenuous injuries and rehabilitation, Salazar vowed to get back to work. He said he had a wedding shoot set up in November in Vermont which he promised to make.

"I'm going to persevere. And I'm going to be able to do this for the rest of my life," said Salazar.

He said within the first half hour, he realized he'd be able to continue his career.

Despite all the troubles, he said he's thankful for the support of friends, family, and other loved ones.

"My attitude with the whole thing is you can either go two ways. You can either be super depressed about it, and let it get you down. Or you can put a positive spin on it, and just keep going. I chose to keep going," Salazar said.

As for the girl he pushed out of the way, the final picture he took of her ended up being her senior portrait.

"It meant a lot that she did really did like the picture, and under the circumstances she did put it up," said Salazar.

Kennedy is now a student at Columbia University in New York, and Salazar said they recently met up during a recent business trip he took to the area.

KVUE spoke with Salazar at the site of the crash, a location he had only returned to once before.

"The one thing I notice now more than I did back then is how small the sidewalk is and how close the cars are," said Salazar.

Multiple times during our interview, cars quickly drove by or honked loudly.

Recently, Salazar said he lost a civil suit against the driver and driver's insurance company to get money towards future surgeries and rehab that doctors tell him he'll need.

He added he received $500,000, but half of that went to lawyers and court costs. It's about $900,000 short of the $1.4 million he said doctors told him he would need to cover all future costs associated with the accident.

On a scale of 1-10, he said his pain level is about a 4, and that he feels a sensation at the end of his limb.

He's now trying to raise money for a mechanical prosthetic, which would enable him to move more easily. He said his insurance won't cover it because it is considered "experimental." Go here to learn more about Salazar's fundraising efforts.