The Congress Avenue Bridge is home to about 1.5 million bats, and Austin Bat Refuge has made it their mission to help those who don't make it home come morning. 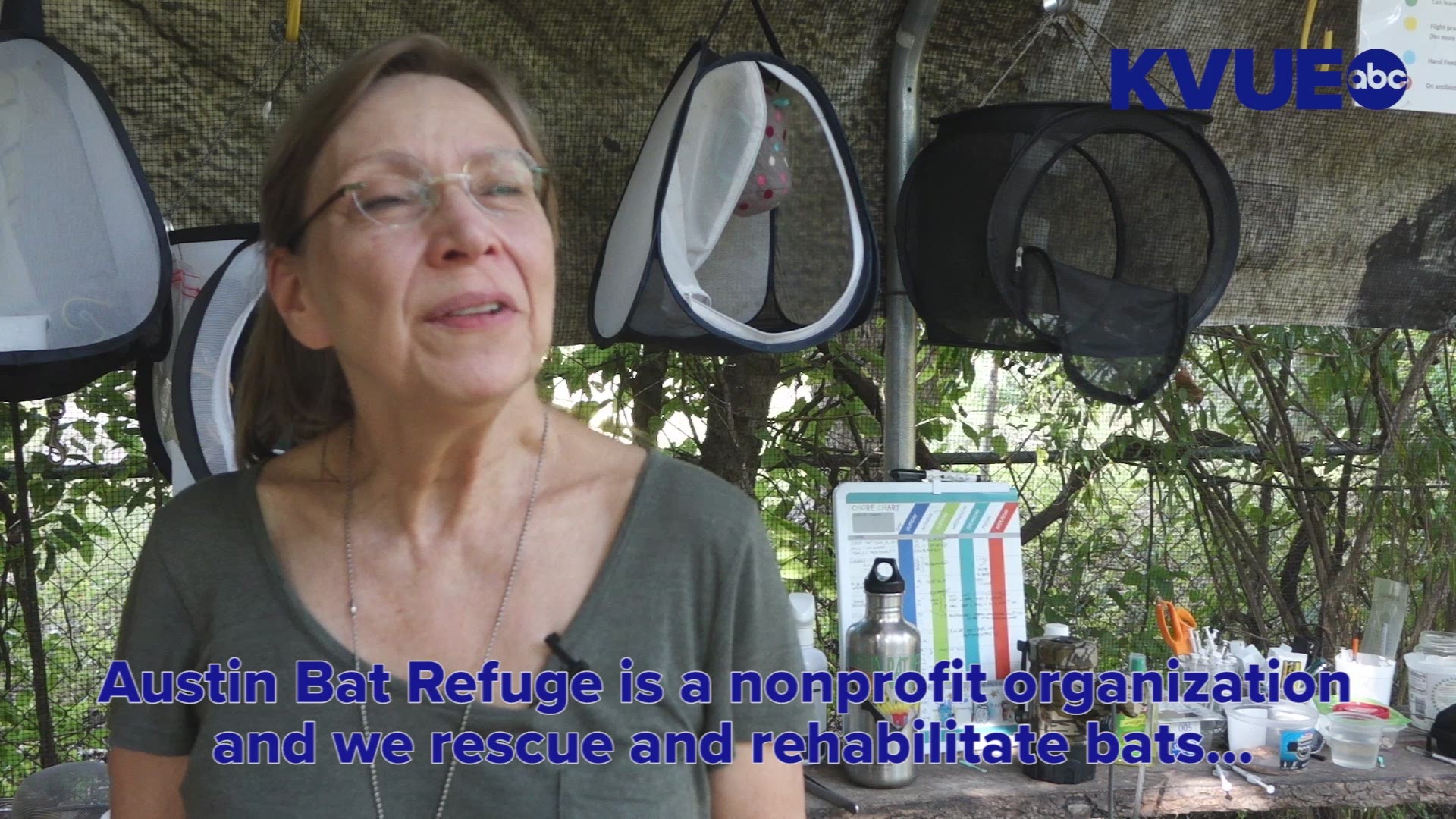 AUSTIN, Texas — Every night here in Austin, hundreds of people descend upon the Ann W. Richards Congress Avenue Bridge with hopes of seeing a magnificent sight.

As many gather on the banks of Lady Bird Lake, climb aboard riverboats or congregate atop the bridge itself, there’s something aflutter underfoot. You see, nestled in the concrete crevices, about 1.5 million bats are preparing for their nightly flight.

It’s been an attraction that has drawn millions to our city – that treasured cloud of hungry Mexican free-tailed bats. And while many visitors come and go, there’s one couple here in Austin making it their mission to help the wayward bats who might not make it back home when morning comes.

Meet Dianne and Lee – the faces of Austin Bat Refuge

The late summer months are the best time to visit the bats on Congress Avenue bats, but it’s also one of the busiest times for Austin Bat Refuge. In fact, right now they’re currently caring for about 100 bats.

But they’re happy to be doing it.

“I've always been interested in wildlife, I've been a carpenter all my life so I've been finding them in buildings we've been remodeling all my life,” said co-founder Lee Mackenzie. “We would find raccoons in the attic or squirrels in the eaves … so I've always admired people that take care of them and usually drop them off at the vet.”

RELATED: Fungus that can be deadly for bats spreading in Texas

When he met co-founder Dianne Odegard, who would later become his wife, he said she was doing just that.

“She had a lot of raccoons at the time but ended up getting a job with Bat Conservation International and we traded the other mammals for bats,” Mackenzie recalled.

And the rest was history.

“Austin Bat Refuge is a nonprofit organization and we rescue and rehabilitate bats, and we do a lot of community education about bats and their benefits,” said Odegard. “We talk to groups in the Austin area and surrounding areas and sometimes farther away in Texas.”

In addition to traveling to places like schools, nature centers and conventions for opportunities to teach the world about their beloved bats, she said there’s another important message they really hope sticks with everyone.

“Another part of our mission is to do conflict resolution when people have bats in their buildings, their homes or their offices,” she said. “We try to help them alleviate situations and explain exactly how to do that humanely – not harming the bats or the people.”

So you’ve found a bat. Now what?

Odegard said a lot of the injured bats that come in are the result of people hurting them out of fear, which is something that could easily be avoided.

“We do get bats with broken bones with regularity, sometimes from people swatting at them with objects when they become frightened and startled when a bat is in their space,” said Odegard. “These bats are mostly juveniles coming in this time of year. They are not quite adult bats, they don’t really know exactly how to be a good bat yet and they get into trouble – with people, with buildings, all kinds of situations.”

So, if you’ve come across a bat, there’s no need to cause it any harm. Most of the time they’re just scared, lost or confused. Instead, give Austin Bat Refuge a call.

“What we do is ask people to safely contain the bat, and we explain how to do that on the phone or ask them to go to our website, where we have several ways of doing that safely – always wearing gloves, leather gloves,” said Odegard.

Then, you are asked to bring the injured bat to the Refuge if you are willing and able. If not, a member of their team can come and retrieve it.

But, if the bat does not appear to be injured, it might be OK on its own.

“The whole thing is to just simply don't ever touch a bat with your bare hands and there's absolutely no danger,” added Mackenzie. “Instead of giving them a hand, you would give them a stick and lift them up into a tree where they could possibly drop into flight.”

The bats of Austin

So, what kind of bats does Austin Bat Refuge take care of? For starters, let's talk about our Congress Avenue colony.

“Those are Mexican free-tailed bats. They're a wonderful bat species, we're crazy about them,” said Mackenzie. “They’re magnificent bats. We don't have just any old bat living at Congress Avenue Bridge, we have the fastest living thing in the sky – faster than any other bat species and faster than any bird … can fly 100 mph in level flight.”

The Mexican free-tailed bat may be the star of the city, but there are eight others that are commonly found in our area:

“Every once in a while, we'll get a couple of migrators coming through,” said Mackenzie. “The silver-haired bat coming through, but they're the exception in our experience.”

And they’re all great for the local ecosystem, especially if you hate bugs.

“Oh, they're the primary predator of night-flying insects. So without them, we'd be overrun by mosquitos and moths and crop pests,” said Mackenzie. “They are highly beneficial, saving our farmers and us between $3-20 billion a year in crops that don't get ruined."

1 / 14
Drew Knight, KVUE
Local nonprofit Austin Bat Refuge cares for many types of injured or sick bats, releasing many of them back into the wild once they are feeling better.

Misconceptions about our beloved bats

Austin Bat refuge also wanted to clear up some common misconceptions about their flying mammals.

“There's a long list … they've been getting a bad rap for thousands of years and maybe possibly beyond that,” said Mackenzie. “No, they won't get stuck in your hair, and they don't all carry rabies, and they're not blind. So many cultures around the world have a saying 'blind as a bat,' but they're wrong all over the world. Just because bats see with their ears in total darkness doesn't mean they can't use their eyes in broad daylight. Many of them are foliage-resting bats and need their eyes to see predators coming and they all need eyes to navigate.”

You can rest assured that a majority of the bats you may see are harmless. In fact, Mackenzie and Odegard love the bats so much that they adopt those who aren’t able to be released back into the wild.

“That’s our goal! To release them back into the wild,” said Odegard. “That happens more than 50% of the time, depending on the year and the types of bats that we get in. Some bats are not releasable, they can’t fly well enough – or at all in some cases … so they have a home with us.”

It's a home the couple has built on the wings of bats. And they have no plans of stopping any time soon.

RELATED: 7 of the most batty facts for National Bat Appreciation Day: Austin edition

“Well, I gotta tell you, they’re a slippery slope,” said Mackenzie. “They're cryptic and not easy to see but, with all the advanced technology, everybody's getting a window into this once-dark world of the bats … On top of all that, the thing that really puts it over the top for us is we get to see them up close and personal, we get to care for the injured bats, care for the orphans, and that's what really gives you that love for them. And it's like I said, it's a slippery slope, before you know it you'll find yourself talking to a TV camera about them.”

How can you help?

Austin Bat Refuge runs strictly on donations, aside from the occasional grant.

“We don’t get any city or state funding, so we really rely on people’s donations,” said Odegard. “We rely on their goodwill, their interest and their appreciation for what we do for bats – and for the public. We feel like what we do here is a public service – we like to maintain the health of the public and the health of the bats.”