The officer is recovering, but some in northwest Austin say they've seen more feral hogs recently. 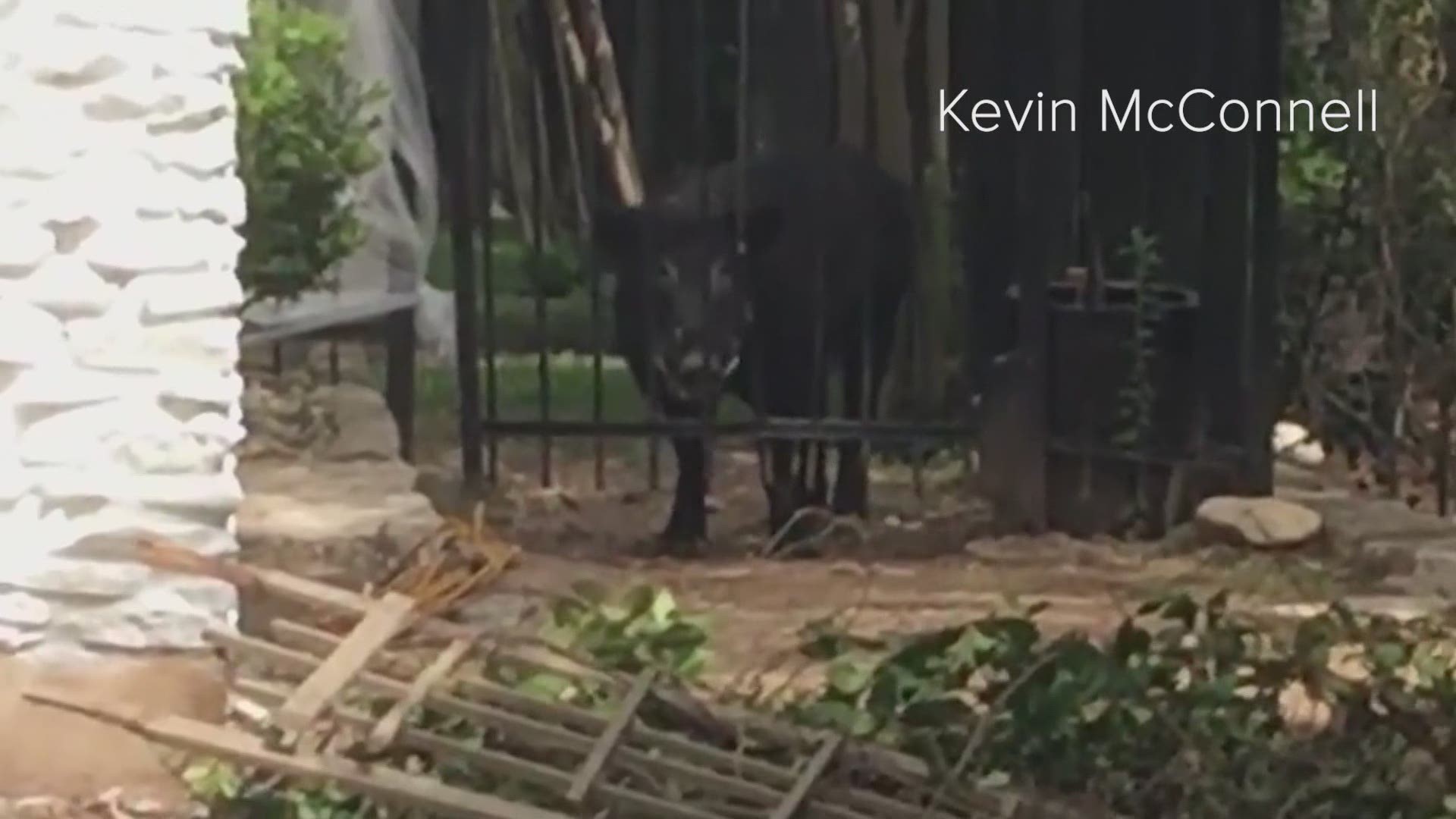 AUSTIN, Texas — An Austin Animal Protection officer was hurt after responding to a home in northwest Austin where a feral hog had been trapped in the backyard.

Neighbors told KVUE the hog was seen running through the Lakewood neighborhood on Friday, Oct. 9. A painter who was working on a home closed a gate behind the hog after it ran into a backyard.

According to a spokesperson with the City of Austin's Animal Services, the responding officer was assessing the situation when the hog pushed through the metal fence. The officer was gored by the hog's tusks in the front and back of his leg and also sustained cuts and scratches on his hands, arms and legs, the spokesperson said.

The officer, pictured below, received treatment and is now recovering.

"I had no idea that they could be that aggressive," said Lane Arnold, the homeowner whose yard the hog was trapped in. "Luckily my children had just started back to school that week."

Arnold said that the painter working on his house saw the hog run towards them, which caused them to end up trapping the hog in the backyard.

He said that the hog ran away after the incident and he hopes people in the community stay aware of feral hogs, as he believes they could cause harm if children come across them.

"It could’ve been a worse situation had it been a child or a pet or something," Arnold said. "Be vigilant, be vigilant."

JT Moorman took this video of the hog when it was in the backyard: 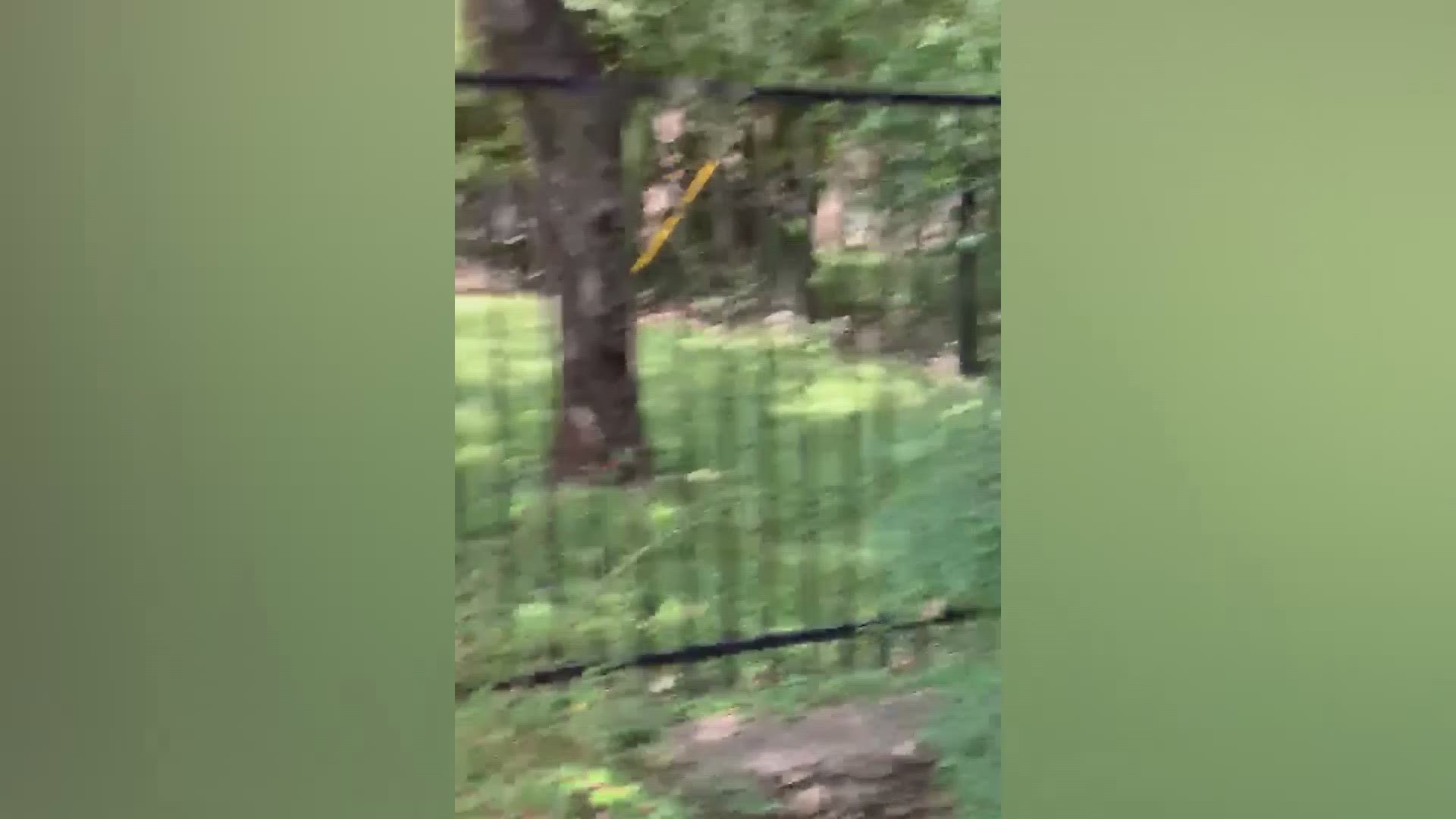 KVUE found through the NextDoor app that other residents in the Northwest Hills and Jester areas have reported seeing feral hogs. However, the Animal Services spokesperson said the department has not received an increase in calls recently.

The Animal Services Office doesn’t normally handle wild hogs. However, they recommend not to approach wild animals and said wildlife generally wants to stay far away from humans but if they feel threatened or if there are babies around, they can become aggressive very quickly. The office also advised keeping a safe distance and eliminating attractants around your property such as food and water.

According to the Texas Parks and Wildlife Department, there are an estimated 1.5 million feral hogs in all of Texas.

"Over the years, those numbers have grown to the point where they’re very common throughout the state," Tomecek said. "In urban areas, it's certainly not uncommon anymore to hear about damages to property, damages to the environment, to water, wildlife, etc."

Credit: Luis de Leon
One part of Lane Arnold's damaged fence in Northwest Austin due to a feral hog.

He added that northwest Austin's geography is attractive for feral hogs.

"Pigs are really keying in on those creek bottoms ... because they have an essential need for that water and that shaded environment," Tomecek said. "In the case of pigs, since they aren’t native wildlife – and, in fact, they destroy native ecosystems – the goal is to get rid of the pig."

At Austin Water, the Wildland Conservation Division (WCD) has actively worked for a decade to reduce the feral hog population on land it manages through a program of trapping and safely dispatching hogs.

As far as how to handle feral hogs, a State law implemented last September allows anyone to hunt the hogs on private property without a license, but with consent from the landowner. However, it's important to note, it's illegal to discharge a firearm in the city of Austin.

Round Rock police searching for kidnapping suspect; another suspect arrested