Richard Hasselberg is almost retired from his mechanical engineering job. When he opened a sharpening shop as a side hustle, he didn't expect it to boom like it has. 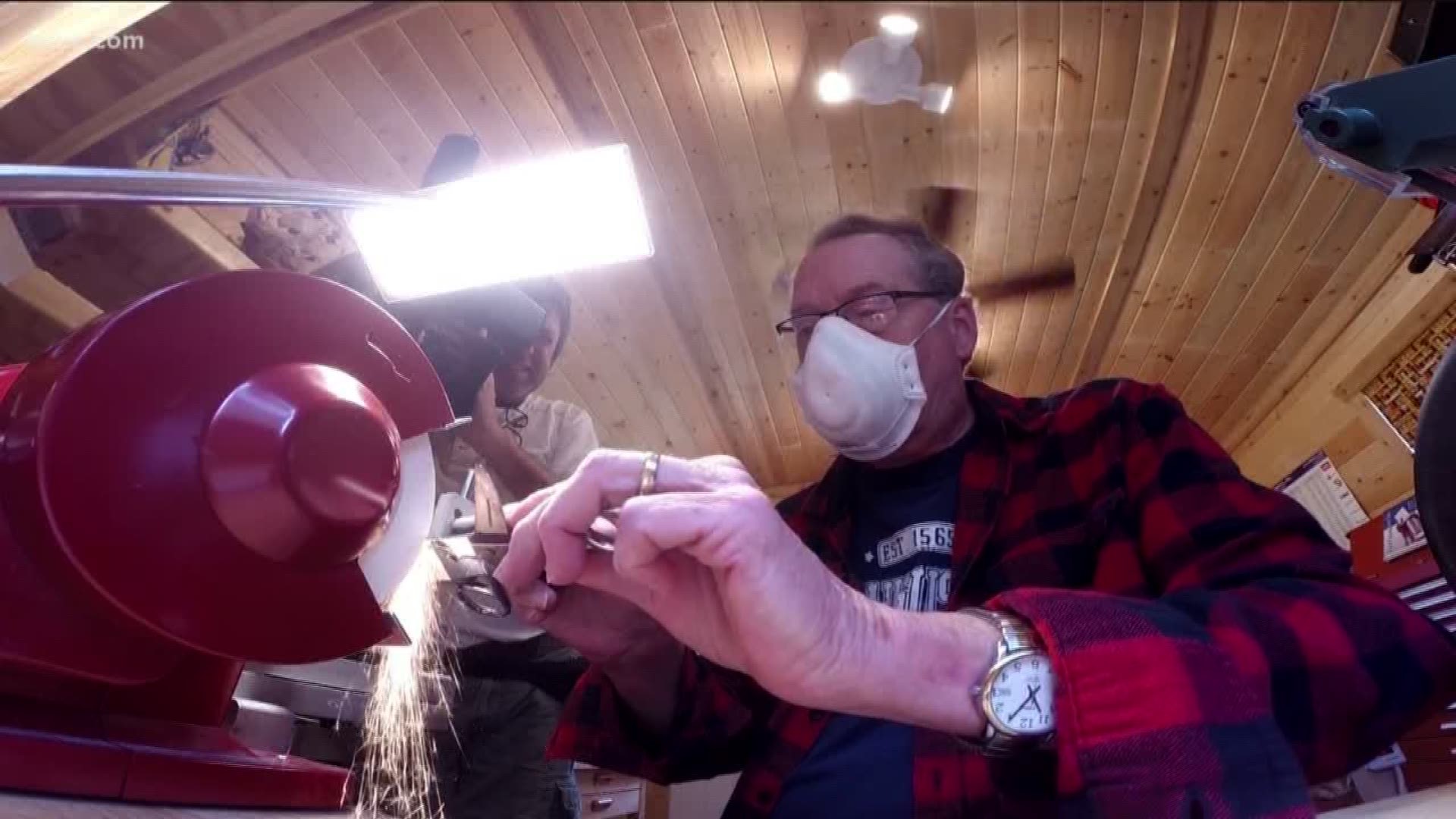 WIMBERLEY, Texas — A Wimberley man is finding retirement much different than he originally planned.

A few times a week, you can find 66-year-old Richard Hasselberg inside a tiny one-room workshop, surrounded by sharp objects.

In the workshop, it can get pretty noisy when Hasselberg turns on any one of his tools. He even has to wear a mask and turn on a filtration system so tiny shards of metal won't fill his lungs.

But he said he wouldn't have it any other way.

"It's definitely a lot of fun and, plus, I enjoy doing it," he said.

In June 2019, Hasselberg opened the shop, The Cutting Edge, in Wimberley. It sits on FM 2325, right behind his wife's quilting store, Wimberley's Stitch Studio.

Just like it sounds, The Cutting Edge is a sharpening business. Hasselberg sharpens knives, scissors, blades, you name it.

RELATED: In Other News: Wimberley man's respect for history draws him to two unique hobbies

He started the business mainly as a way to support his wife's business – but just three weeks after opening, it got to be too much.

"I realized I was getting overwhelmed with business," Hasselberg said.

He had to hire help because, it turns out, a lot of people needed things sharpened.

"Overwhelming for the scissors, fabric scissor sharpening and the rotary blades for fabric cutting. And then it's just branched out from there to beauticians, barbers, dog groomers, restaurants with all their knives," Hasselberg said.

So what was supposed to be a side gig, just something to do after retirement, has turned into a booming business.

"I'm very thankful that it's where it's at today, and it's constantly growing because I enjoy doing this stuff so much. It keeps me out of trouble," Hasselberg said.

PHOTOS: Business is booming for the Cutting Edge

1 / 11
Jenni Lee
During the week, Rich is an aerospace engineer who drives from Wimberley to Austin. During the weekend, he has a thriving business called the Cutting Edge.

RELATED: In Other News: Wimberley man quits job with 6-figure salary for leather

Timing is also everything, according to Hasselberg's business partner and property owner Merilyn Barney.

"We have no other sharpeners here in Wimberley. Ace [Hardware] did have a sharpener, but he retired so people were just excited about having something this close in the neighborhood," Barney said.

Barney said when the Wimberley Stitch Studio is open, many of the customers are there for The Cutting Edge.

"We can have six people in this store at any time," she said. "His business has increased this business, absolutely."

Hasselberg hasn't actually fully retired from his mechanical engineering job just yet. When he does in a couple of months, he plans to extend The Cutting Edge's hours to five days a week.