Couple has first lunch together since March to celebrate 70th anniversary 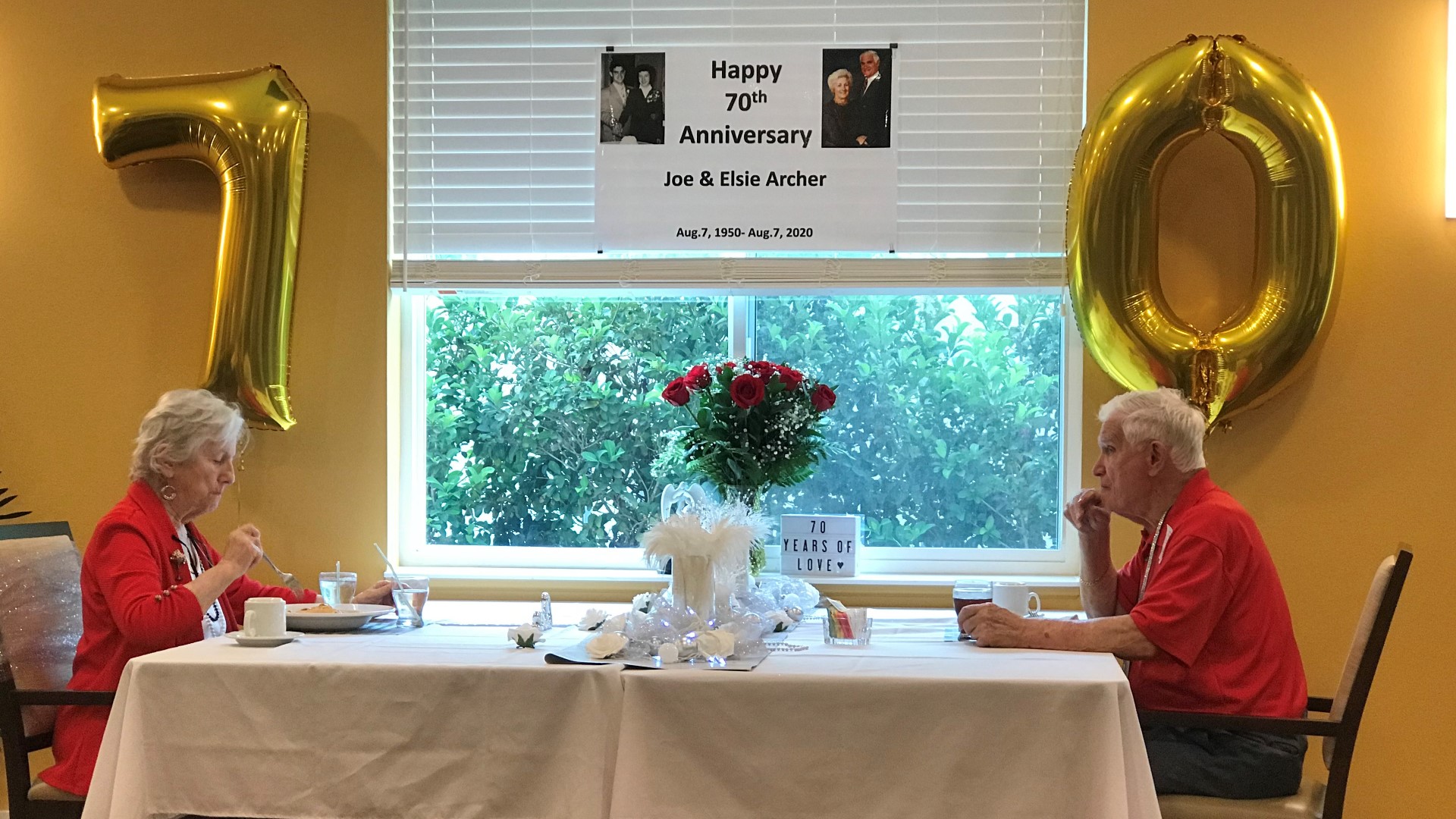 TAMPA, Fla. — Joe Archer smiled as he firmly clutched his bride’s hand. Elsie smiled back. The two lovebirds gazed at each other through protective face shields as their children called to them through an open window.

Admittedly, this wasn’t the way anybody expected the couple to celebrate 70 years of marriage.

“They’ve created a legacy led by example,” said Sue Reynolds, one of the Archer’s six children.

Sue made a short drive from Palm Harbor to the Discovery Village at Westchase where Elsie has been living for nearly a year. Although she’s never been officially diagnosed, the family knows that dementia has made life different for their mother.

“I wouldn’t have missed it,” said Linda Miller, who flew from North Carolina to spend the morning waving through the Discovery Village window at her mom.

Of all the family memories, Joe says his wedding was his favorite. He was 21. She was 19. They got married in a catholic rectory and went back to her parent’s house for ice cream, cake, and coffee.

“That was our reception,” he said. “Her parents couldn’t afford anything more.”

“It’s just such an inspiration for not just us but everyone,” said Cinda Snow, Linda’s twin, who lives part-time in Los Angeles.

The COVID-19 pandemic has limited Elsie’s interactions for most of the family but, because Elsie receives care from Hospice, Joe is still able to visit her daily. He makes the short drive from East Lake Woodlands to see his wife. They don’t have lengthy conversations, but they do have meaningful moments.

“You don’t know what she understands,” he said. “Whatever she picks up, fine. If not, who cares? As long as we’re together.”

Joe worked as a traveling salesman for the Wrigley Corporation and Elsie split time between work and raising their children. The couple had six kids before Elsie’s 27th birthday.

After a short time waving through the window, Joe and Elsie were thrown a celebration lunch by Discovery Village. It’s the first meal they’ve had together since March.

Linda held number gold “7-0” balloons. Cinda called to Elsie through the window. Sue grinned over it all.

“She taught him the traditions of family and celebrations and being dedicated to each other,” she said. “We never know how mom is going to react to situations but dad is going to be really touched.”

The day wasn’t exactly how anyone dreamed it would be a decade ago, but it turned out to be memorable, nonetheless.

Elsie does have some long-term memory. She loves music and watching the Hallmark Channel. Her family plays, ‘You Are My Sunshine’ for her quite often.