Is Austin still the 'Live Music Capital of the World'?

It's a title made official by the Austin City Council nearly three decades ago when the city claimed Austin had more live music venues per capita than any other city in the country. KVUE decided to look into whether or not that moniker holds true. 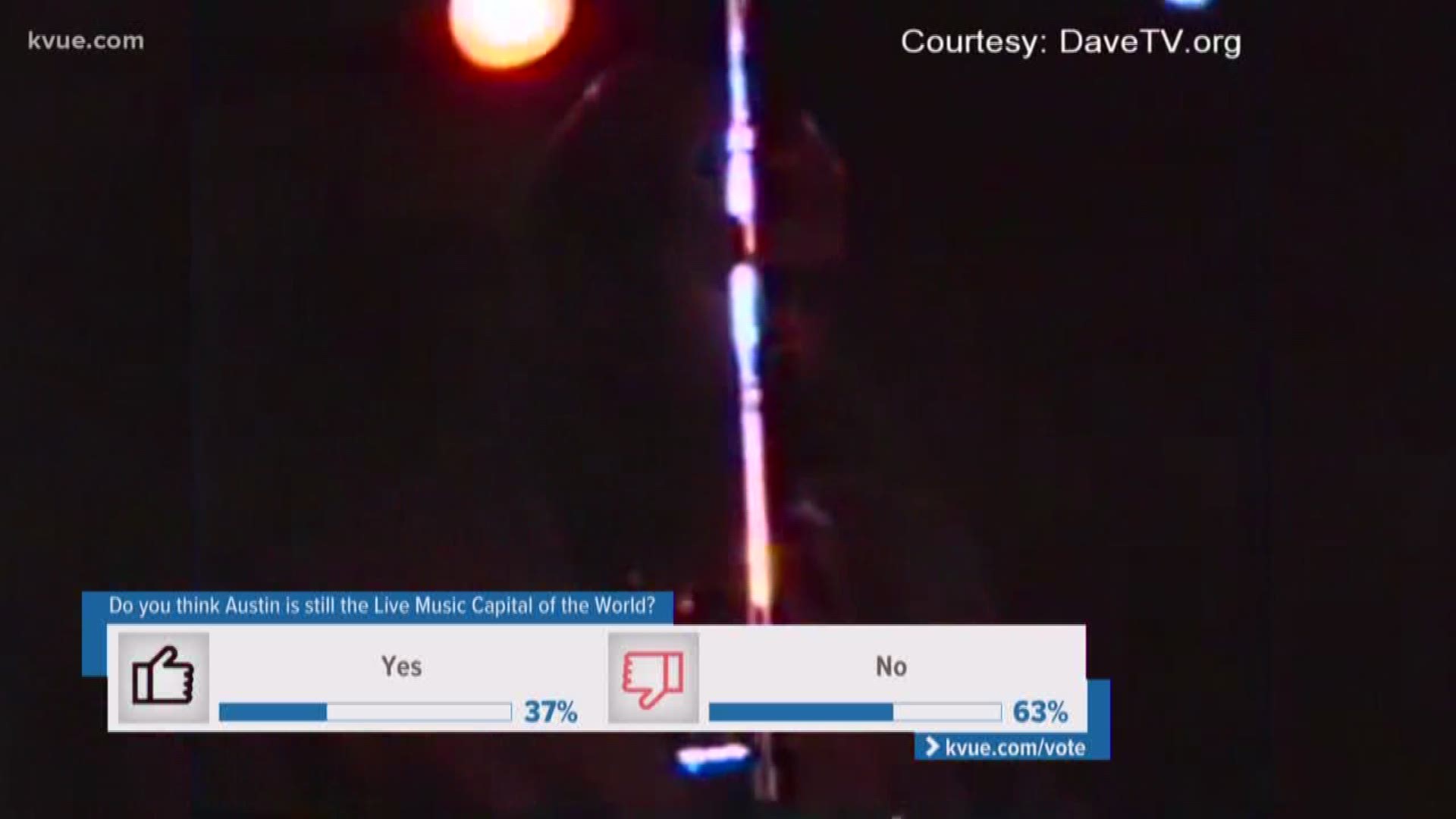 AUSTIN — You see it on t-shirts, murals, and it’s what travelers see when they arrive at the airport: “The live music capital of the world.”

It’s a title made official by the Austin City Council nearly three decades ago when the city claimed Austin had more live music venues per capita than any other city in the country.

KVUE decided to look into whether or not that moniker holds true.

Here is an interactive map of places to see live music based off the City of Austin's permitting list.

KVUE’s Kris Betts talked to several of the artists who’ve been a big part of Austin’s music scene back then and now all agree the music scene is much different than it was when city council made the “Live Music Capital of the World” declaration.

“It was like an oasis of Texas,” remembers Omar Vallejo of his younger days in Austin. "You'd go down to sixth street and any bar and any band you wanted to see was there." “You had a radio station that supported the bands.”

"They were putting them in heavy rotation like they were playing the major artists," AJ, Omar Vallejo's brotther, added.

Their band, Vallejo, has been packing Austin music venues for more than two decades.

Singer/guitarist Lance Keltner brought his blues-based style to Austin more than three decades ago when he was 19. Keltner said the obvious change is the economy.

“(You could) make a really good living and rest of the time we could just go hang out at Barton Springs or whatever we wanted to do,” Keltner said. “There were so many places to play back then. It was unbelievable.”

"You can call it the good old days. There were clubs and concert halls then that made this town what it is today and they're all gone, which just blows my mind,” Wilks said.

Wilks is talking about the dozens music venues that have closed down due to unaffordable rents and ever-rising property taxes. Legendary venues like Steamboat on 6th Street and Liberty Lunch closed in 1999 due to property ownership changes and redevelopment, which seemed to begin a troubling trend.

There were once well over 300 live music venues in Austin.

But now, according to the city, there are roughly 250 venues offering some form of live music ranging from hotels, restaurants, nightclubs, to theatres and concert arenas. The city’s economic development department now said it doesn’t know how many live music venues per capita there were when city council made the “live music capital” proclamation compared to the amount in 2018.

"The musicians made the city,” said Wilks. “The city just decided to put a moniker on it."

Wilks, Keltner and others also say it’s much harder for Austin musicians to make a living playing live music.

“It's tough and I think any of my older musician friends would say that,” said Wilks. "You can't live in the past. Austin has changed so change with it or shut up. That's what I think"

Vallejo has this advice for aspiring Austin musicians: "Play about a hundred shows here in Austin and then people may come see you more." But Vallejo says he’s not so sure about the “live music capital” moniker anymore.

"As far as to say Austin is the live music capital of the world, I don't think so anymore but it's way cooler than anyone else,” he laughed.

"They don't have live music in all these places like they used to but it's still an awesome thing to be an Austin-based musician and I think it always will be,” said Keltner.

"For anybody to say the old Austin is dead, it's not dead it's just different," said Vallejo.