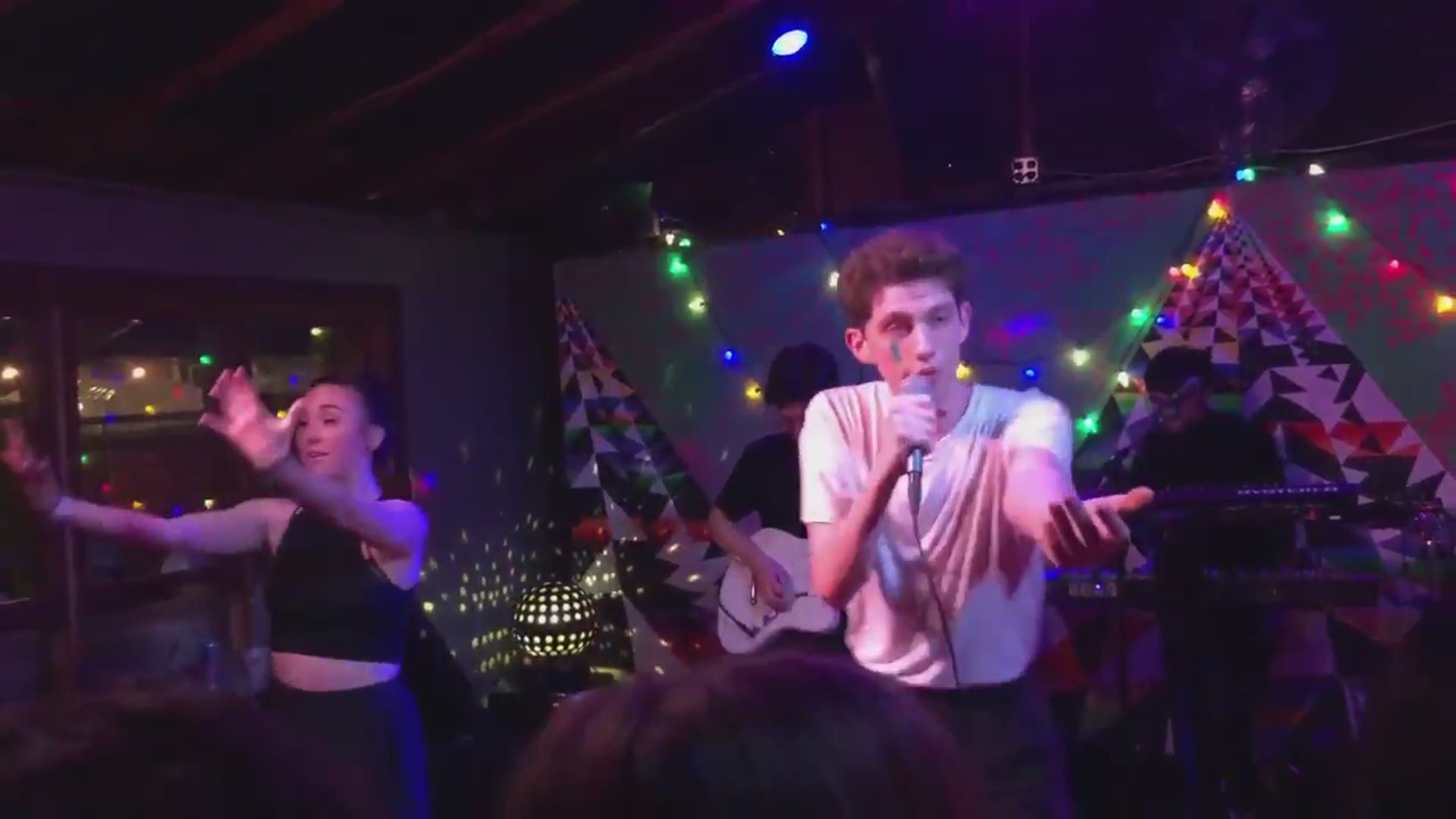 AUSTIN, Texas — South by Southwest might be over, but it's just the beginning for TC Superstar.

The Austin synth-pop collective made up of University of Texas graduates has been a group for less than two years, but they've already managed to go on a few national tours – and 2019 marked the first time they scored an "official" showcase at the SXSW music festival.

Moments before they took the stage at Hotel Vegas on Austin's east side, we sat down with the rising stars to talk about their humble beginnings and where they see themselves heading in the near future.

So dust off your dancing sneakers, it's time to meet TC Superstar.

If you've witnessed a couple TC Superstar shows before, you may have noticed their ranks tend to change. But that's not because there's trouble in outer space.

With eight members – four of which are dancers – most stages like Cheer Up Charlies and Swan Dive don't provide enough space to envelop the stars. So, they often trade places as they juggle their day jobs and other worldly missions.

Anyways, at a TC Superstar show, you might spot:

"Everyone pitches in in different ways and everyone has their own talents that they contribute to the group," said Connor. "So in that regard, it is kind of a collective, but also any band is. We’re a self-described dancy band."

They're a dancy band with influences that range from film – think "Napoleon Dynamite" meets "A Knight's Tale" – to both modern and classic rock – think Porches and Blood Orange to the Talking Heads and Steely Dan.

"From another person’s perspective, we’re usually described as '80s synth-wave dance pop," the frontman said when asked to describe the group. "It started as a solo project, but it has become a performance group. We should really have something tight for this, but we really don’t. It’s kind of weird, it’s a little amorphous."

The stars are born

But how the stars aligned to create the amorphous TC Superstar is a more complicated story.

It begins with Connor who, in high school, was questioning the ideals of masculinity and took a ride in his buddy's Toyota.

"My friend Travis in high school drove a Toyota Corolla, that was always the whip that we’d be cruising around in, and that car was unbeatable," he remembered. "But it was also not a very sexy car. So if I want to write about someone 'beta male' who is having a hard time at work because of toxic masculinity problems, that’s the car he’s gonna drive."

As he was heading out for a trip to Europe, he felt inspired on a walk home from his piano lesson and wrote the melody for "Toyota Corolla" in five minutes. In fact, he wrote all of TC Superstar's first album on his own later on in college.

And that's where he met Julio.

"Julio and I met freshman year and just kind of hit it off as best friends," said Connor. "And we started making music together for a project. We wanted to make this cartoon album where every song was from a different cartoon from our childhood, we could add a lot of references. It was really fun to work on that music ... but it was not great music."

Enter Mitch, who he also met under less-than-ideal musical circumstances.

"We had a class in the music school that was absolutely terrible, Intro to Western Music, and they taught like we were 5-year-olds," Connor said. "But then he kind of hopped on to the project."

Next, Aaron, who he met in a progressive church service.

"We met just because we always partied at Julio’s place and we were always like the last two people dancing on the dance floor at the end of the night, and we just started hanging out and we became better friends later in college," Connor recalled.

After he showed them the album he created, they all agreed they belonged together. LB recruited her fellow dance majors Emily, Francis and Riko, and TC Superstar was born.

Since their formation, TC Superstar continues to rise. They've all graduated, they've gone on tour – and they even played on a boat.

"The boat show was really cool because we had the sunset in the background, it was also just nice to get out of downtown during SXSW," Connor said.

But the tours have been the best part.

"We met so many just beautiful and friendly people on the way that have been incredibly supportive," said Connor. "There’s nothing like going to a new city and just crashing on a stranger’s couch. And then hanging out with them the next day being like, 'Oh, we’re friends now! I’ll just see you in a year when we come back to your city.'"

Additionally, they even got to perform at a campaign event for Beto O'Rourke at Spider House.

But, like for most rising stars, SXSW has been an especially "wild week" for TC Superstar.

"It’s been really amazing to see how much we’ve grown in a year," Connor said. "None of us have ever been in a band that’s been doing this well, which is a little weird. We’ve been around for about a year, then we were nominated for best Austin band [Austin Music Awards], and we got an official showcase. It’s been kind of amazing. Thank God this hard work is paying off."

Another amazing moment, especially for LB and her dancing co-stars, was performing at a show for Anna Halprin, a huge name in postmodern dance.

"We played a show at The Contemporary that was just awesome because it was for Anna Halprin’s exhibit," Connor said. "She’s a famous modern dance choreographer, so it was really nice to get asked to play that. We played on the rooftop, and it’s rare that we get a big enough stage to have all four dancers at once."

It was a historic moment for TC Superstar, whose mission from the beginning has been to make dance a little more accessible to the public.

"Because it’s definitely one of the least accessible art forms – it’s expensive, it’s done on proscenium-style stages, you have to dress up when you go see dance," said Connor. "So we’re trying to get outside of that, so we thought a good way was to just invite the community into our North Austin dance studio."

Now, they've started to host dancing lessons there for friends and fans.

"We were a little skeptical at first, but we’ve had a lot of people that want to come out, and it’s really amazing to see the same people come learn some of our dance moves, learn a little bit of whatever they want to learn, and then see them at our next show busting all of our moves in the crowd," he said. "Everybody is kind of their own performer, and that’s one of our big goals as a band."

You can learn more about those lessons on TC Superstar's social media accounts.

Written in the stars

Apart from "dance, dance, dance," or "dance eight times for every member," Connor said the band really doesn't have one true message written in the stars.

"Every album has a different message," he said. "I don’t try to moralize the albums, I don’t think that’s fair to people."

But the first album, "Masc," Connor said kind of challenges fans to rethink notions of masculinity.

The second album, "Heat Death," is about the environment and inspiring people to become a little more sustainable. Their third album, "R&D," which is expected to be released on May 18, is about love, relationships and romance.

"There are a million different ways love can exist, and they’re all beautiful, and you should really just do what works for you and your partner or partners or whoever," Connor said.

You can learn more about how you can help support the creation of "R&D" here.

"We’ve got some new singles coming out soon, we’ve got a couple music videos in the works, a lot of new merch on the way, a seven-week tour coming up," Connor said. "Thank you to everybody that’s helped us, let us eat their food or sleep on their couch or just high-five us at a show. It makes it all worth it."

PHOTOS: SXSW Outdoor Stage at Ladybird Lake wraps up for 2019

'Beto-Lizzo 2020, you voting?' Rap star tips her flute to O'Rourke at SXSW