The audience at the 15th annual Trick Olympics was in for a real treat. 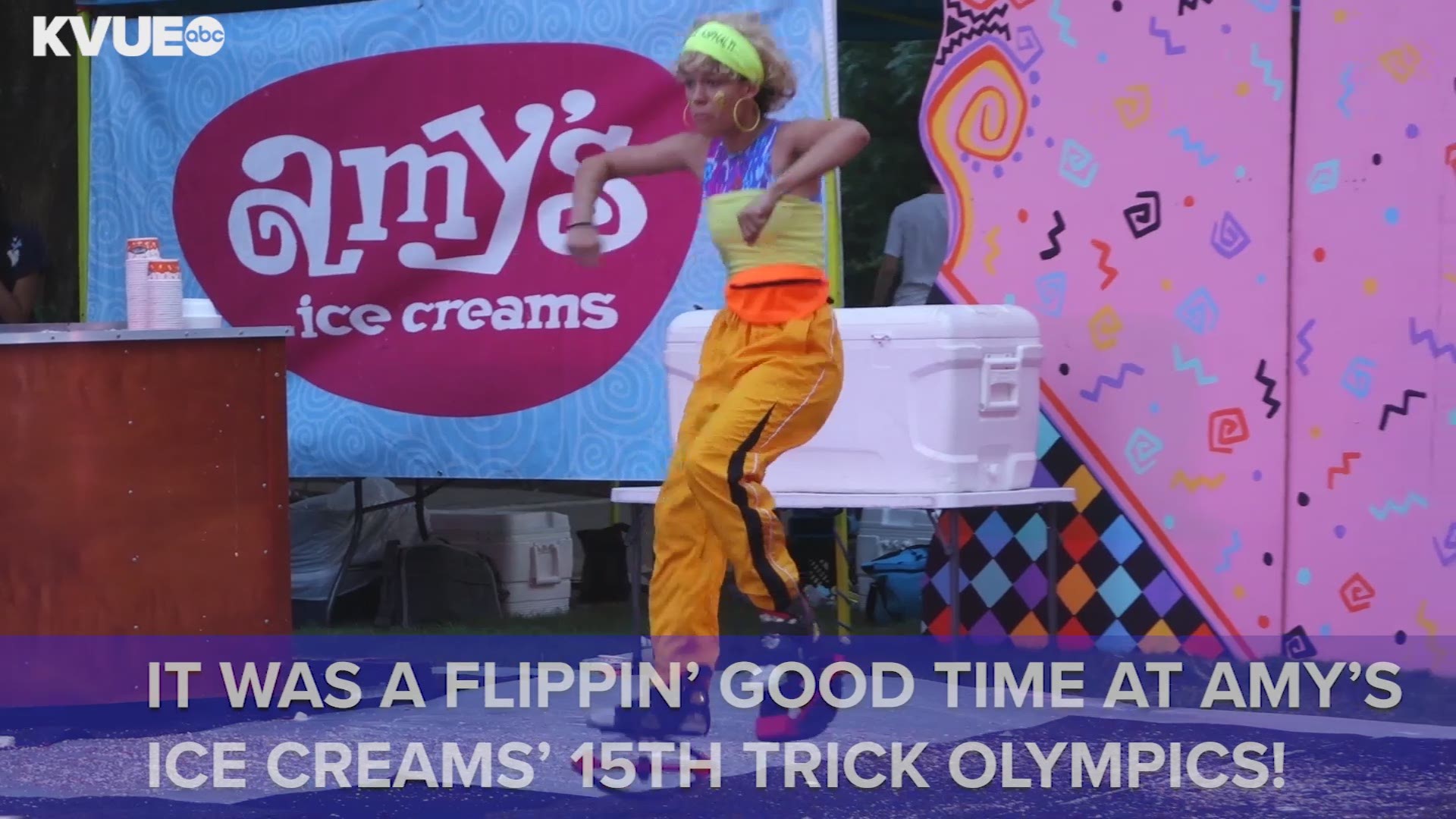 AUSTIN, Texas — It was a flippin' good time at the Arboretum Tuesday.

Amy's has been around in Austin for over three decades but the Trick Olympics got started in 2004 to showcase the fancy flip work the company's "scoops" do all the time in their stores.

"It sort-of celebrates how spunky, weird and fun Amy's is as a company," said James Sipowicz, a shift manager at the Amy's location on South Lamar. "It got started because we have so much talent in the company, why not bring it together and showcase it for everyone to see? If we just keep it in the stores, we’re holding ourselves down but we really have to expose it, get people to know why we’re doing it and why it’s so fun."

This year's '80s-themed Trick Olympics were held in the courtyard down from the Amy's location at the Arboretum – the company's longest-standing store, according to Marketing Director Aaron Clay.

The event consisted of different challenges: the decathlon, which was made up of 10 consecutive tricks done in multiple heats, with scoops competing directly against each other; solo tricks, where scoops showed off their individual skills; and team tricks, where groups of two or more scoops worked together on a trick routine. Solo and team tricks were judged for difficulty, if the scoop caught their ice cream and how loud the crowd reaction was.

So, in the words of a scoop "trickster," what makes a winner?

In addition to checking out the cool tricks, Trick Olympics attendants could purchase ice cream either from the store or from Amy's new food truck. There was also a tent set up where attendants could make donations to CASA of Travis County and be entered into five different raffles, for everything from beach supplies to, naturally, a year's supply of ice cream.

Twenty percent of the day's sales were also donated to CASA. Amy's chose the organization to receive this year's donations because of the work they do in the community.

"CASA does a lot of amazing work in Austin," Sipowicz said. "They do so much for kids who really don’t have people to represent [them] – court-appointed social advocacy is something that’s really special, especially for people in the foster care system who don’t have representation, who don’t really have people on their sides. This is a great company to support because they are doing so much good in places that most people don’t think about."

A sweet event for a good cause. What a treat!

The first place winner of the decathlon event was Caden Fonseca. The other finalists were: Sebastian Whitney, Kelly Sjordsma, Carson Marek and Blaise Kutzer.

The winners in the solo tricks event were: Blaise Kutzer in 1st place, Tommy Deibler in 2nd place and Jackie Meisel and Poqui Bergara tied for 3rd.