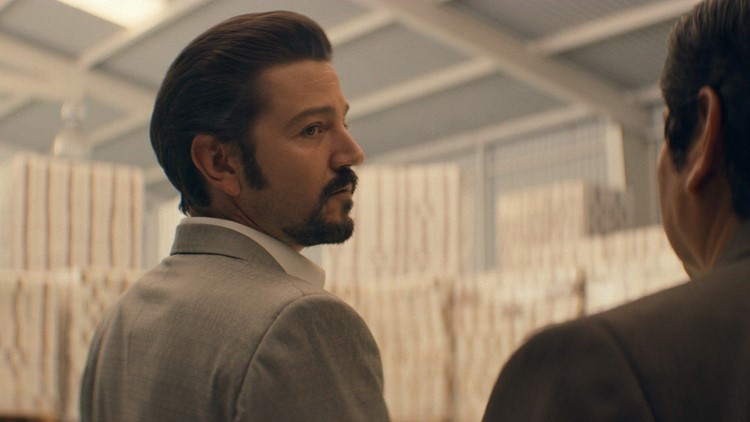 'Narcos: Mexico': Diego Luna on How His Final Scene in Season 2 Got 'Personal' (Exclusive)

Miguel Ángel Félix Gallardo's reign came to an end in the season two finale of Narcos: Mexico -- but that doesn't mean the story is over.

The Netflix series' sophomore season ends with Gallardo's (Diego Luna) 1989 arrest, and his warning to DEA agent Walt Breslin (Scoot McNairy) that the Mexican drug trade still has a promising future. The drug lord refuses to take responsibility for Kiki Camarena's (Michael Peña) murder, but predicts that tensions will only rise as those who used to work under him, including Joaquín "El Chapo" Guzmán (Alejandro Edda) and Amado Carrillo Fuentes (José María Yazpik), start to build their own empires.

That tense conversation between Gallardo and Breslin was a difficult one for Luna to film, in part because of what it signified for him: the unnerving fact that Narcos was approaching the present-day drug trade and its infamous players. Luna grew up in Mexico during Gallardo's rise to power, and while the drug lord is still alive and in prison, neither he nor his associates have tried to reach out to the actor. However, there are others in the story, such as El Chapo, who have more of a hold on present-day Mexico and could be explored in a possible third season of Narcos: Mexico.

"It was a challenge," Luna told ET of filming Gallardo's final scene this season, in a prison opposite McNairy's Breslin. "This season starts to get too close to the Mexico I live in, and the Mexico I've been witnessing in my life. It is getting really close."

Then, there were the more physical aspects of the scene. "There is a change on the look. I had to wait to shoot this scene until I was done with everything else in the season. It was the last scene I shot, and I also waited a long time to do a scene with Scoot," Luna continued.

"So, it was challenging, it was very emotional in many ways, personal. I mean, for me and for the role, and I think it's a great way to set people's minds into the debate that we need to be having these days," the actor reflected. "I think it was very smart of the writers to actually end saying those words and having the character reflect on the big picture. To me, that's very interesting and very smart, and it's a message that the season is ending."

Netflix has yet to renew Narcos: Mexico for a third season, and while the storyline certainly opens the door for another installment, it seems Gallardo's story has come to a close. As the actor told ET, he didn't sign on to the series hoping for a long-term gig (in fact, he's got a number of projects in the pipeline). Luna signed on to play Gallardo in Narcos: Mexico because of the opportunity it could have as a conversation starter. "It's touching an issue with a complexity you don't find much," he noted.

"Understanding the violence within Mexico today doesn't belong to us, because the issue doesn't belong to us. It's a global issue, and we're getting the worst part of it," Luna said. "So, we need this conversation to get out there. We need this conversation to matter to people out of Mexico in order to find a solution one day that involves all of us."

"[The drug trade and cartel violence] wouldn't be happening if there wasn't such a big market here in the States and in many other countries around the world, and if the banks were not making a lot of profit with this money, it would be more difficult for all these organizations to deal with their everyday activity," he added. "So why are we not blaming banks, governments around the world? Why are we not blaming the strategy? Because clearly this war is being lost."

"That's one of the reasons why I'm in this job, why I accepted this story," Luna explained. "Besides the challenge that it represents as an actor to play this role, there's also this feeling of well, I'm part of something that matters to me."

Season two of Narcos: Mexico is now streaming on Netflix.

'Narcos: Mexico': Diego Luna on the Dangers of Feeling 'Untouchable' in Season 2 (Exclusive)