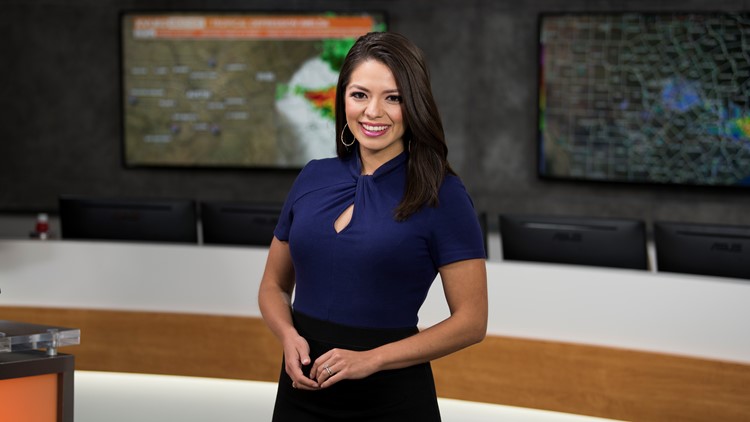 She grew up in nearby North Texas and worked in Midland/Odessa before Arkansas. This Arlington, Texas, native has seen her fair share of severe weather in studio and out in the field, including coverage of the record-breaking rainfall by Hurricane Florence for KVUE's sister station WCNC in Charlotte, North Carolina.

Ruiz is a Certified Broadcast Meteorologist (CBM), a designation given to her by the American Meteorological Society in October 2017. To earn the CBM, broadcasters must hold a degree in meteorology, pass a rigorous written examination, and have their on-air work reviewed by a panel.

Mariel received her Bachelors of Science in Meteorology from Texas A&M University. While there, she was active in Texas Aggie Broadcasting and a member of the Texas Aggie Storm Chasers. Mariel is a member of the American Meteorological Society. She has previously presented research at the annual conference and has also participated in a panel to speak to upcoming broadcast meteorology students.

With a zeal for communication of all kinds, Ruiz is fluent in Spanish and often uses social media to share needed weather information. Her social media presence continues to grow tremendously thanks to her unique forecasting through the various platforms available.

Mariel has been active with several organizations, but her passion is helping young women pursue and advance in STEM careers. Over the last few summers, Mariel hosted Museum of Discovery’s Girls in STEM programs to show young women the behind-the-scenes life of a meteorologist. Shortly after arriving to Little Rock, Mariel also landed on the cover of Arkansas' El Latino magazine. The magazine was excited to have a Spanish-speaking scientist on TV and wanted to introduce her to the Hispanic community.

If she is not "nerding out" over weather, you can find Mariel spending time with her husband, Joseph, and their two dogs.